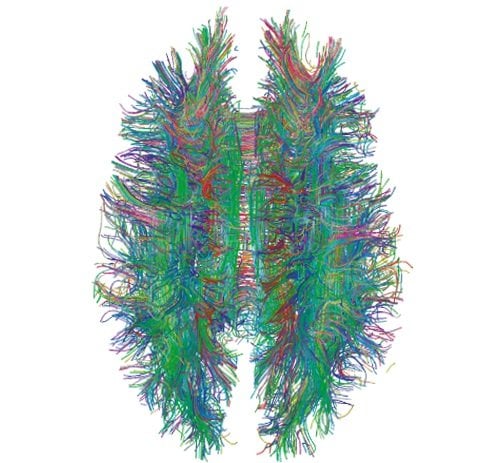 Higher accumulation of lithium was observed in the white matter of depressive patients treated with this medication. The lithium content in the neighboring grey matter was 3-to-4 times lower. This image is a diffusion MRI tractography of the brain's white matter.
Home
Featured

Predicting Who Will Have Chronic Pain

Abnormalities in brain axons predispose people to chronic back pain after injury.

Abnormalities in the structure of the brain predispose people to develop chronic pain after a lower back injury, according to new Northwestern Medicine research. The findings could lead to changes in the way physicians treat patients’ pain.

Most scientists and clinicians have assumed chronic back pain stems from the site of the original injury.

“We’ve found the pain is triggered by these irregularities in the brain,” said A. Vania Apkarian, senior author of the study and a professor of physiology at Northwestern University Feinberg School of Medicine. “We’ve shown abnormalities in brain structure connections may be enough to push someone to develop chronic pain once they have an injury.”

Based on MRI brain scans of people who had a new lower back injury, Northwestern scientists could predict with about 85 percent accuracy which patients’ pain would persist. The predictor was a specific irregularity or marker the scientists identified in the axons, pathways in the brain’s white matter that connect brain cells so they can communicate with each other.

The findings provide a new view of treating chronic pain, which affects nearly 100 million Americans and costs up to $635 billion a year to treat.

“We think the people who are vulnerable need to be treated aggressively with medication early on to prevent their pain from becoming chronic,” Apkarian said. “Last year, we showed people who take medication early on had a better chance of recovering. Medication does help.” Apkarian also is a member of the Robert H. Lurie Comprehensive Cancer Center of Northwestern University.

The research, funded by the National Institutes of Health, was published Sept. 16 in the journal Pain.

Brain abnormalities have been observed in other long-term chronic pain conditions. Apkarian’s study is the first to show brain structure abnormalities are a marker of a predisposition to the chronic pain, not a result of living with it.

The lead author of the study is Ali Mansour, M.D., formerly a postdoctoral fellow in Apkarian’s lab.

Apkarian’s research focuses on the relationship between chronic pain and the brain. One of his previous studies showed chronic pain patients lose gray matter volume over time.

Chronic pain is one of the most expensive health care conditions in the U.S. and takes an enormous toll on quality of life, yet there still is not a scientifically validated therapy for the condition. Lower back pain represents 28 percent of all causes of pain in the U.S.; about 23 percent of these patients suffer long-term pain.

The abnormalities identified in the study were found in multiple white matter axon bundles, some surrounding the nucleus accumbens and medial prefrontal cortex, two brain regions involved in processing emotion and pain. Last year, the Apkarian group showed that the physiological properties of these two regions identify which patients will persist with back pain. The new results identify a pre-existing culprit for these physiological responses to the injury.

“The brain abnormalities exist in the general population, but only those people with a back injury go on to develop the chronic pain,” Apkarian said.

For the study, Apkarian and his colleagues scanned the brains of 46 people who had an episode of lower back pain for at least four weeks and had not experienced any pain for at least one year before that. Their pain had to be rated at least five out of 10 on a pain scale for them to be included in the study.

Scientists followed the patients for a year, scanning their brains at the onset of study and one year later. After a year about half of them had improved, regardless of whether they took anything to treat the pain, and half of them continued to have pain. Those with the persistent pain had the same structural abnormalities in their white matter at the onset of the injury and after one year.

“The abnormality makes them vulnerable and predisposes them to enhanced emotional learning that then amplifies the pain and makes it more emotionally significant,” Apkarian said.

“Pain is becoming an enormous burden on the public,” said Linda Porter, the pain policy advisor at National Institute of Neurological Disorders and Stroke (NINDS) and a leader of the National Institutes of Health (NIH) Pain Consortium. “The U.S. government recently outlined steps to reduce the future burden of pain through broad-ranging efforts, including enhanced research. This study is a good example of the kind of innovative research we hope will reduce chronic pain, which affects a huge portion of the population.”

Notes about this neurology and chronic pain research

The research was supported by grant NS035115 from the NINDS of the NIH.