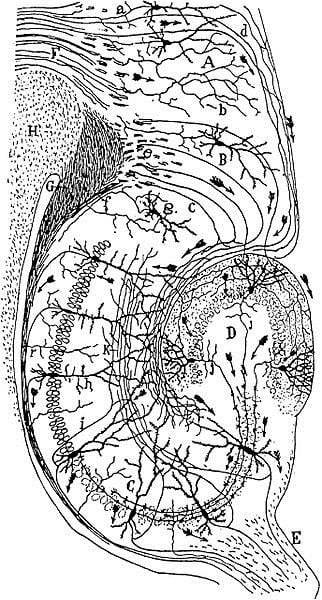 Researchers hypothesized the ventilation induced hippocampal apoptosis was partially medicated by elevated activation of dopamine receptors in that area of the brain. This is a drawing of the neural circuitry of the rodent hippocampus. Credited to Santiago Ramón y Cajal, Histologie du Systeme Nerveux de l'Homme et des Vertebretes.
Home
Featured

At least 30 percent of patients in intensive care units (ICUs) suffer some form of mental dysfunction as reflected in anxiety, depression, and especially delirium. In mechanically-ventilated ICU patients, the incidence of delirium is particularly high, about 80 percent, and may be due in part to damage in the hippocampus, though how ventilation is increasing the risk of damage and mental impairment has remained elusive.

Now, a new study published in the American Journal of Respiratory and Critical Care Medicine from researchers at the University of Oviedo in Spain, St. Michael’s Hospital in Toronto, Canada, and the Perelman School of Medicine at the University Pennsylvania found a molecular mechanism that may explain the connection between mechanical ventilation and hippocampal damage in ICU patients.

The investigators, including Adrian González-López, PhD, in the laboratory of Guillermo M. Albaiceta, MD, PhD at the University of Oviedo , and co-authored by Konrad Talbot, PhD, an assistant research professor in Neurobiology in the Department of Psychiatry at Penn Medicine, began by studying the hippocampus in control mice and in mice on low or high-pressure mechanical ventilation for 90 minutes. Compared to the controls, those on either low- or high-pressure ventilation showed evidence of neuronal cell death in the hippocampus, as a result of a cell suicide program called apoptosis.

The investigators hypothesized that ventilation-induced apoptosis in the hippocampus was at least partly mediated by elevated activation of dopamine receptors in that brain area. This was confirmed by showing that pretreatment of mice with type 2 (D2) dopamine receptor blockers injected into the ventricles of the brain significantly reduced ventilation-induced apoptosis in the hippocampus.

The investigators then studied the consequences of ventilation and elevated hippocampal dopamine on dysbindin-1, a protein known to affect levels of cell surface D2 dopamine receptors, cognition, and possibly the risk of psychosis. High-pressure ventilation in mice caused an increase in gene expression of dysbindin-1C, and later, in protein levels of dysbindin-1C. Dopamine alone had similar effects on dysbindin-1C in hippocampal slice preparations, effects that were inhibited by D2 receptor blockers.

Since dysbindin-1 can lower cell-surface D2 receptors and protect against apoptosis, the authors speculate that increased dysbindin-1C expression in the ventilated mice may reflect compensatory responses to ventilation-induced hippocampal apoptosis. That possibility applies to ICU cases given the additional finding by the authors that total dysbindin-1 was increased in hippocampal neurons of ventilated compared to non-ventilated humans who died in the ICU.

The findings could lead to new therapeutic uses of established drugs and targets for new drugs that activate a molecular pathway mediating adverse effects of ICU ventilation on brain function.

“The results prove the existence of a pathogenic mechanism of lung stretch-induced hippocampal apoptosis that could explain the development of neurobehavioral disorders in patients exposed to mechanical ventilation,” the authors write. One of the coauthors, Dr. Talbot, adds: “The study indicates the need to reevaluate use of D2 receptor antagonists in minimizing the negative cognitive effects of mechanical ventilation in ICU patients and to evaluate the novel possibility that elevation in dysbindin-1C expression can also reduce those effects.”

Examining Children’s and Adults’ Reasoning About the Nature of Villains

The corresponding author, Dr. Albaiceta, offered a look at future research on this topic: “Now that we have established the mouse model, we are mainly looking for therapeutic approaches aimed at avoiding the vagal activation caused by mechanical ventilation and therefore prevent the deleterious effects observed in the hippocampus,” he said. “We are also interested in studying the relationship between the different described gene polymorphisms of dysbindin, Akt, and type 2 dopamine receptor versus the incidence of neurological disorders in patients on ventilation in ICUs. This could help us to identify susceptible individuals to in which a preventive treatment could be effective.”