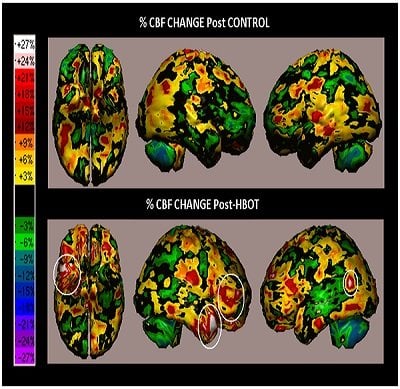 Volume rendered Brain SPECT images representing the CBF change (in percentage) post control period and post HBOT of the cross group patient described in example 4. The overall changes after the control period and the HBOT show normal variations of brain perfusion in the -10% to +10% range (from green to orange colors). However, close inspection reveals localized significant changes (white circles) in the in the right temporal pole and in the right dorso-lateral area. These changes in perfusion are in good agreement with the improvements in the cognitive indices as the SPECT detected changes correspond to Brodmann areas 45–46, 11, 38 and 39. Credit Rahav Boussi-Gross, Haim Golan, Gregori Fishlev, Yair Bechor, Olga Volkov, Jacob Bergan, Mony Friedman, Dan Hoofien, Nathan Shlamkovitch, Eshel Ben-Jacob, Shai Efrati/PLOS ONE.
Home
Featured

Now Dr. Shai Efrati and Prof. Eshel Ben-Jacob of Tel Aviv University’s Sagol School of Neuroscience have proven that it is possible to repair brains and improve the quality of life for TBI victims, even years after the occurrence of the injury.

In an article published in PLoS ONE, Dr. Efrati, Prof. Ben Jacob, and their collaborators present evidence that hyperbaric oxygen therapy (HBOT) should repair chronically impaired brain functions and significantly improve the quality of life of mild TBI patients. The new findings challenge the often-dismissive stand of the US Food and Drug Administration, Centers for Disease Control and Prevention, and the medical community at large, and offer new hope where there was none.

The trial included 56 participants who had suffered mild traumatic brain injury one to five years earlier and were still bothered by headaches, difficulty concentrating, irritability, and other cognitive impairments. The patients’ symptoms were no longer improving prior to the trial.

The participants were randomly divided into two groups. One received two months of HBOT treatment while the other, the control group, was not treated at all. The latter group then received two months of treatment following the first control period. The treatments, administered at the Institute of Hyperbaric Medicine at Assaf Harofeh Medical Center, headed by Dr. Efrati, consisted of 40 one-hour sessions, administered five times a week over two months, in a high pressure chamber, breathing 100% oxygen and experiencing a pressure of 1.5 atmospheres, the pressure experienced when diving under water to a depth of 5 meters. The patients’ brain functions and quality of life were then assessed by computerized evaluations and compared with single photon emission computed tomography (SPECT) scans.

“What makes the results even more persuasive is the remarkable agreement between the cognitive function restoration and the changes in brain functionality as detected by the SPECT scans,” explained Prof. Ben-Jacob. “The results demonstrate that neuroplasticity can be activated for months and years after acute brain injury.”

“But most important, patients experienced improvements such as memory restoration and renewed use of language,” Dr. Efrati said. “These changes can make a world of difference in daily life, helping patients regain their independence, go to work, and integrate back into society.”

A New Device for Early Diagnosis of Degenerative Eye Disorders

“This is where HBOT treatment can help,” said Dr. Efrati. “The elevated oxygen levels during treatment supply the necessary energy for facilitating the healing process.”

The findings offer new hope for millions of traumatic brain injury patients, including thousands of veterans wounded in action in Iraq and Afghanistan. The researchers call for additional larger scale, multi-center clinical studies to further confirm the findings and determine the most effective and personalized treatment protocols. But since the hyperbaric oxygen therapy is the only treatment proven to heal TBI patients, the researchers say that the medical community and the US Armed Forces should permit the victims of TBI benefit from the new hope right now, rather than waiting until additional studies are completed.

Notes about this neurology and TBI research