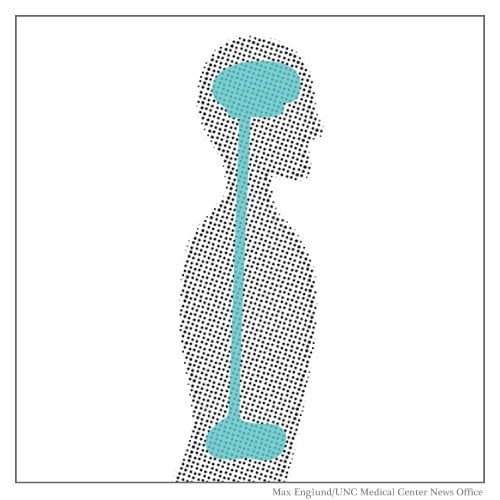 Researchers implanted fiber optic cables into the brains of transgenic mice. They shone a light through the cables and onto the BNST synapses. When the light hit the BSNT synapses, the mice began to eat voraciously, even though they had already been fed. Additionally, these mice showed a preference for foods with higher fat contents. Credited to Max Englund, UNC Medical Center News Office.
Home
Featured

The finding shows that certain parts of brain cells could play a critical role in anorexia, bulimia, binge eating disorder, and obesity.

Sixty years ago scientists could electrically stimulate a region of a mouse’s brain causing the mouse to eat, whether hungry or not. Now researchers from UNC School of Medicine have pinpointed the precise cellular connections responsible for triggering that behavior. The finding, published September 27 in the journal Science, lends insight into a cause for obesity and could lead to treatments for anorexia, bulimia nervosa, and binge eating disorder, the most prevalent eating disorder in the United States.

“The study underscores that obesity and other eating disorders have a neurological basis,” said senior study author Garret Stuber, PhD, assistant professor in the department of psychiatry and department of cell biology and physiology. He’s also a member of the UNC Neuroscience Center. “With further study, we could figure out how to regulate the activity of cells in a specific region of the brain and develop treatments.”

Cynthia Bulik, PhD, Distinguished Professor of Eating Disorders at UNC School of Medicine and the Gillings School of Global Public Health, said, “Stuber’s work drills down to the precise biological mechanisms that drive binge eating and will lead us away from stigmatizing explanations that invoke blame and a lack of willpower.” Bulik was not part of the research team.

Back in the 1950s, when scientists electrically stimulated a region of the brain called the lateral hypothalamus, they knew that they were stimulating many different types of brain cells. Stuber wanted to focus on one cell type — gaba neurons in the bed nucleus of the stria terminalis, or BNST. The BNST is an outcropping of the amygdala, the part of the brain associated with emotion. The BNST also forms a bridge between the amygdala and the lateral hypothalamus, the brain region that drives primal functions such as eating, sexual behavior, and aggression.

The BNST gaba neurons have a cell body and a long strand with branched synapses that transmit electrical signals into the lateral hypothalamus. Stuber and his team wanted to stimulate those synapses by using an optogenetic technique, an involved process that would let him stimulate BNST cells simply by shining light on their synapses.

His team then implanted fiber optic cables in the brains of these specially-bred mice, and this allowed the researchers to shine light through the cables and onto BNST synapses. As soon as the light hit BNST synapses the mice began to eat voraciously even though they had already been well fed. Moreover, the mice showed a strong preference for high-fat foods.

“They would essentially eat up to half their daily caloric intake in about 20 minutes,” Stuber said. “This suggests that this BNST pathway could play a role in food consumption and pathological conditions such as binge eating.”

Stimulating the BNST also led the mice to exhibit behaviors associated with reward, suggesting that shining light on BNST cells enhanced the pleasure of eating. On the flip side, shutting down the BNST pathway caused mice to show little interest in eating, even if they had been deprived of food.

“We were able to really home in on the precise neural circuit connection that was causing this phenomenon that’s been observed for more than 50 years,” Stuber said.

The study, which uses technologies highlighted in the new National Institutes of Health Brain Initiative, suggests that faulty wiring in BNST cells could interfere with hunger or satiety cues and contribute to human eating disorders, leading people to eat even when they are full or to avoid food when they are hungry. Further research is needed to determine whether it would be possible to develop drugs that correct a malfunctioning BNST circuit.

“We want to actually observe the normal function of these cell types and how they fire electrical signals when the animals are feeding or hungry,” Stuber said. “We want to understand their genetic characteristics – what genes are expressed. For example, if we find cells that become really activated after binge eating, can we look at the gene expression profile to find out what makes those cells unique from other neurons.”

And that, Stuber said, could lead to potential targets for drugs to treat certain populations of patients with eating disorders.

Notes about this neurology and overeating research

For this study, Stuber received funding from the National Institute on Drug Abuse and the Klarman Foundation, a private organization that funds basic research related to eating disorders.