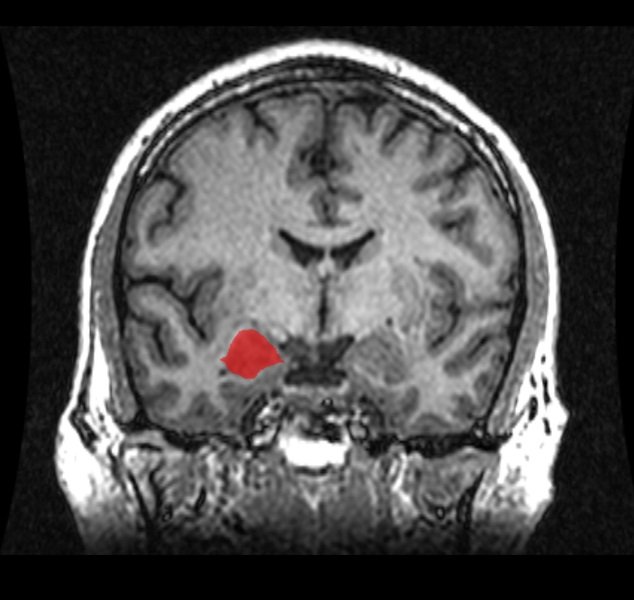 Researchers were able to identify how exposure to heroin induced a specific switch in a memory molecule in the basolateral amygdala. This area of the brain is involved in controlling memories related to opiate addiction, withdrawal and relapse. The MRI image highlights the location of the amygdala in the human brain.
Home
Featured

Scientists Discover a Novel Opiate Addiction Switch in the Brain

Neuroscientists at Western University have made a remarkable new discovery revealing the underlying molecular process by which opiate addiction develops in the brain. Opiate addiction is largely controlled by the formation of powerful reward memories that link the pleasurable effects of opiate-class drugs to environmental triggers that induce drug craving in individuals addicted to opiates.

The research is published in the September 11th issue of The Journal of Neuroscience.

The Addiction Research Group led by Steven Laviolette of the Schulich School of Medicine & Dentistry was able to identify how exposure to heroin induces a specific switch in a memory molecule in a region of the brain called the basolateral amygdala, which is involved importantly in controlling memories related to opiate addiction, withdrawal, and relapse. Using a rodent model of opiate addiction, Laviolette’s team found that the process of opiate addiction and withdrawal triggered a switch between two molecular pathways in the amygdala controlling how opiate addiction memories were formed. In the non-dependent state, they found that a molecule called extracellular signal-related kinase or “ERK” was recruited for early stage addiction memories. However, once opiate addiction had developed, the scientists observed a functional switch to a separate molecular memory pathway, controlled by a molecule called calmodulin-dependent kinase II or “CaMKII”.

“These findings will shed important new light on how the brain is altered by opiate drugs and provide exciting new targets for the development of novel pharmacotherapeutic treatments for individuals suffering from chronic opiate addiction,” says Laviolette, an associate professor in the Departments of Anatomy & Cell Biology, Psychiatry, and Psychology.

Notes about this neurology and addiction research

The paper is titled “Opiate Exposure and Withdrawal Induces a Molecular Memory Switch in the Basolateral Amygdala Between ERK1/2 and CaMKII-Dependent Signaling Substrates.” In addition to Laviolette, the authors include: Danika Lyons, Xavier De Jaeger, Laura Rosen, Tasha Ahmad, Nicole Lauzon, Jordan Zunder, Lique Coolen, and Walter Rushlow. This research was funded by the Canadian Institutes of Health Research.

Contact: Kathy Wallis – Western University
Source: Western University press release
Image Source: The MRI brain scan image is credited to Amber Rieder, Jenna Traynor, Geoffrey B Hall and is in the public domain.
Original Research: The abstract for “Opiate Exposure and Withdrawal Induces a Molecular Memory Switch in the Basolateral Amygdala Between ERK1/2 and CaMKII-Dependent Signaling Substrates” by Steven Laviolette, Danika Lyons, Xavier De Jaeger, Laura Rosen, Tasha Ahmad, Nicole Lauzon, Jordan Zunder, Lique Coolen, and Walter Rushlow will be published in the Journal of Neuroscience on September 11 2013. We will provide a link to the research and DOI when available.