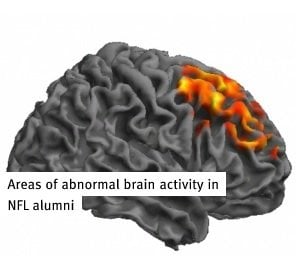 The frontal lobe is responsible for executive functions: higher-order brain activity that regulates other cognitive processes. The researchers think the differences seen in this study reflect deficits in executive function that might affect the person’s ability to plan and organise their everyday lives. Credited to Imperial College London.
Home
Featured

A new study has discovered profound abnormalities in brain activity in a group of retired American football players.

Although the former players in the study were not diagnosed with any neurological condition, brain imaging tests revealed unusual activity that correlated with how many times they had left the field with a head injury during their careers.

The study involved 13 former National Football League (NFL) professionals who believed they were suffering from neurological problems affecting their everyday lives as a consequence of their careers.

The former players and 60 healthy volunteers were given a test that involved rearranging coloured balls in a series of tubes in as few steps as possible. Their brain activity was measured using functional magnetic resonance imaging (fMRI) while they did the test.

The NFL group performed worse on the test than the healthy volunteers, but the difference was modest. More strikingly, the scans showed unusual patterns of brain activity in the frontal lobe. The difference between the two groups was so marked that a computer programme learned to distinguish NFL alumni and controls at close to 90 per cent accuracy based just on their frontal lobe activation patterns.

“The NFL alumni showed some of the most pronounced abnormalities in brain activity that I have ever seen, and I have processed a lot of patient data sets in the past,” said Dr Adam Hampshire, lead author of the study, from the Department of Medicine at Imperial College London.

The frontal lobe is responsible for executive functions: higher-order brain activity that regulates other cognitive processes. The researchers think the differences seen in this study reflect deficits in executive function that might affect the person’s ability to plan and organise their everyday lives.

“The critical fact is that the level of brain abnormality correlates strongly with the measure of head impacts of great enough severity to warrant being taken out of play. This means that it is highly likely that damage caused by blows to the head accumulate towards an executive impairment in later life.”

Dr Hampshire and his colleagues at the University of Western Ontario, Canada suggest that fMRI could be used to reveal potential neurological problems in American football players that aren’t picked up by standard clinical tests. Brain imaging results could be useful to retired players who are negotiating compensation for neurological problems that may be related to their careers. Players could also be scanned each season to detect problems early.

“Researchers have put a lot of time into developing tests to pick up on executive dysfunction, but none of them work at all well. It’s not unusual for an individual who has had a blow to the head to perform relatively well on a neuropsychological testing battery, and then go on to struggle in everyday life.

“The results tell us something very interesting about the human brain, which is that after damage, it can work harder and bring extra areas on line in order to cope with cognitive tasks. It is likely that in more complicated real world scenarios, this plasticity is insufficient and consequently, the executive impairment is no longer masked. In this respect, the results are also of relevance to other patients who suffer from multiple head injuries.

“Of course, this is a relatively preliminary study. We really need to test more players and to track players across seasons using brain imaging.”

Notes about this NFL and neurology research

The participants were enrolled by David Hubbard MD at the Applied fMRI Institute in San Diego, California. The study was funded by the Hubbard Foundation and the Canada Excellence Research Chair Program.