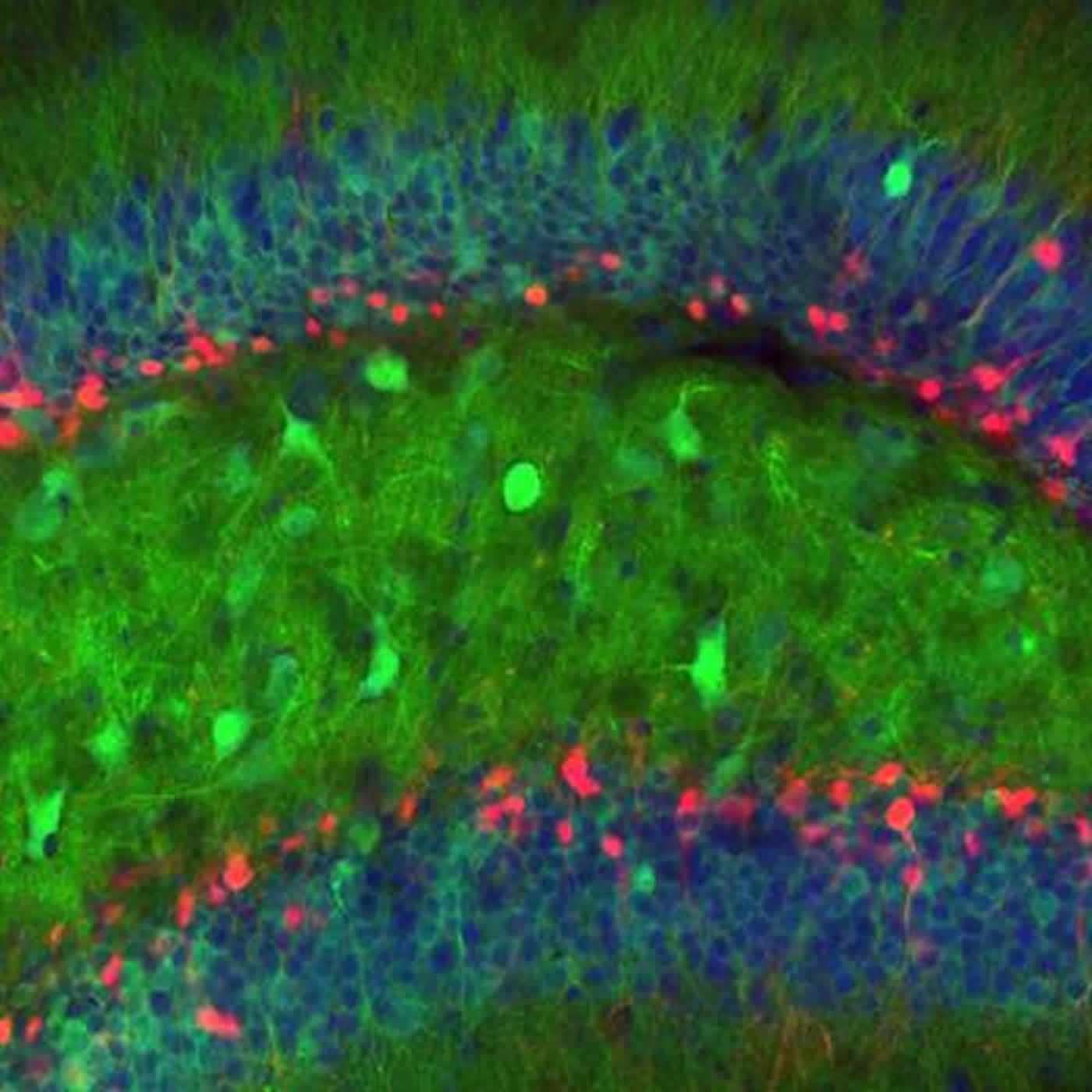 Findings may offer insight into a range of psychiatric conditions, including anxiety and mood disorders.

Columbia neuroscientists have described the activity of newly generated brain cells in awake mice–a process known as adult neurogenesis–and revealed the critical role these cells play in forming memories. The new research also offers clues as to what happens when the memory-encoding process goes awry.

“Our approach allows us to compare the activity of newborn and mature cells in the brains of behaving animals,” said Attila Losonczy, MD, PhD, a principal investigator at Columbia’s Zuckerman Institute, assistant professor of neuroscience at CUMC and a senior author of the paper. “These findings could help scientists decipher the role that adult neurogenesis plays in both health and disease.”

Most brain cells are produced before birth, but a few select brain regions continue to grow new cells into adulthood. One such region is called the dentate gyrus, a tiny structure in the hippocampus, the brain’s headquarters for learning and memory. But because the dentate gyrus is so small, and buried so deeply within the brain, scientists have had difficulty studying it.

“One of the great unanswered questions in neuroscience is, why did nature decide to replenish cells in this region of the brain, but not others?” said Dr. Losonczy. “In this study, we developed sophisticated and refined methods to investigate this question more thoroughly than ever before.”

Earlier studies suggested that cells within the dentate gyrus, known as granule cells, allow the brain to distinguish between similar, yet different, environments. This process, known as pattern separation, is a key component of the brain’s internal GPS. It helps us remember where we parked the car this morning, versus where we parked two weeks ago, for example.

“Most granule cells are present in the dentate gyrus from birth, but a small percentage are the result of adult neurogenesis, which churns out fresh granule cells into adulthood,” said René Hen, PhD, professor of neuroscience and pharmacology (in psychiatry) at CUMC and a senior author of the paper. “We hypothesized that these so-called adult-born granule cells play a crucial role in pattern separation.”

Using a two-photon microscope, the researchers observed the activity of adult-born granule cells in the brains of mice as they walked along a treadmill. In order to induce the formation of new memories, this treadmill was lined with distinct textures and surrounded by different multisensory cues. The scientists were able to map how both types of granule cells–the new, adult-born cells as well as the old, mature cells–were involved in pattern separation.

“Other studies had been unable to image the dentate gyrus, let alone the individual cells that reside within it, at this level of detail,” said Mazen Kheirbek, PhD, the paper’s last author who completed this work while at Columbia. “Here, we were able to demonstrate that adult-born granule cells act differently than their mature neighbors, and determine why that difference is so critical.”

The difference, the researchers found, lies in the adult-born cells’ unique activity pattern. Shortly after they are produced, adult-born granule cells exhibit heightened excitability compared with their mature counterparts. But after six weeks, this activity drops off. The initial burst of excitability, the authors postulated, could be key to capturing the memories required for pattern separation.

To determine what happens when this process is disrupted, the researchers placed the mice in one environment and gave them a small footshock. Then, they introduced the animals to a second, safe, environment that was similar, yet distinct, from the first. Using optogenetics–a technique that uses laser light to manipulate specific brain cells–the scientists temporarily silenced the adult-born granule cells during exposure to the safe environment. A normal, healthy mouse could distinguish between the two settings and exhibited a fear response to the unfavorable environment. But to the mice with the silenced brain cells, both environments–both dangerous and safe–appeared the same, causing the mice to fear both environments.

“These findings reveal that adult-born granule cells are required not only to encode the memory of a new experience, but also to determine whether one experience is different from the next,” said Dr. Kheirbek. “The merging of memories, which is what we observed when the adult-born cells were silenced, is a key feature of a wide range of psychiatric conditions–from anxiety and mood disorders to post-traumatic stress disorder.”

“Indeed, the inability to discriminate between two distinct, but similar events–such as a gunshot versus a car backfiring–is often seen in these disorders,” said Dr. Hen. “Understanding how adult-born granule cells impact behavior in the living brain is an important step toward one day harnessing this process for therapeutic purposes.”

How Psychedelics Light Up Brain’s Neuropathways

Summary
Adult-born granule cells (abGCs) have been implicated in cognition and mood; however, it remains unknown how these cells behave in vivo. Here, we have used two-photon calcium imaging to monitor the activity of young abGCs in awake behaving mice. We find that young adult-born neurons fire at a higher rate in vivo but paradoxically exhibit less spatial tuning than their mature counterparts. When presented with different contexts, mature granule cells underwent robust remapping of their spatial representations, and the few spatially tuned adult-born cells remapped to a similar degree. We next used optogenetic silencing to confirm the direct involvement of abGCs in context encoding and discrimination, consistent with their proposed role in pattern separation. These results provide the first in vivo characterization of abGCs and reveal their participation in the encoding of novel information.