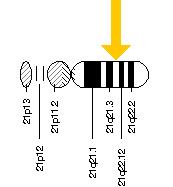 Researchers discovered reducing Usp16 expression in skin and nerve-progenitor cells from people with Down syndrome allowed the cells, which usually proliferate slowly, to assume normal growth patterns. The image shows the location of Usp16 on chromosome 21.
Home
Featured

The learning and physical disabilities that affect people with Down syndrome may be due at least in part to defective stem cell regulation throughout the body, according to researchers at the Stanford University School of Medicine. The defects in stem cell growth and self-renewal observed by the researchers can be alleviated by reducing the expression of just one gene on chromosome 21, they found.

The finding marks the first time Down syndrome has been linked to stem cells, and addresses some long-standing mysteries about the disorder. Although the gene, called Usp16, is unlikely to be the only contributor to the disease, the finding raises the possibility of an eventual therapy based on reducing its expression.

“There appear to be defects in the stem cells in all the tissues that we tested, including the brain,” said Michael Clarke, MD, Stanford’s Karel H. and Avice N. Beekhuis Professor in Cancer Biology. The researchers conducted their studies in both mouse and human cells. “We believe Usp16 overexpression is a major contributor to the neurological deficits seen in Down syndrome.”

Clarke is the senior author of the research, published Sept. 11 in Nature. Postdoctoral scholar Maddalena Adorno, PhD, is the lead author.

“Conceptually, this study suggests that drug-based strategies to slow the rate of stem cell use could have profound effects on cognitive function, aging and risk for Alzheimer’s disease in people with Down syndrome,” said co-author Craig Garner, PhD, who is the co-director of Stanford’s Center for Research and Treatment of Down Syndrome and a professor of psychiatry and behavioral sciences

Down syndrome, which is caused by an extra copy of chromosome 21, affects about 400,000 people in the United States and 6 million worldwide. It causes both physical and cognitive problems. While many of the physical issues, such as vulnerability to heart problems, can now be treated, no treatments exist for poor cognitive function.

The new study’s findings suggest answers to many long-standing mysteries about the condition, including why people with Down syndrome appear to age faster and exhibit early Alzheimer’s disease.

“This study is the first to provide a possible explanation for these tendencies,” said Garner. The fact that people with Down syndrome have three copies of chromosome 21 and the Usp16 gene “accelerates the rate at which stem cells are used during early development, which likely exhausts stem cell pools and impairs tissue regeneration in adults with Down syndrome. As a result, their brains age faster and are susceptible to early onset neurodegenerative disorders.”

The researchers didn’t confine their studies to laboratory mice. They also investigated the effect of Usp16 overexpression in human cells. Adorno and colleagues in the laboratory of co-author Samuel Cheshier, MD, assistant professor of neurosurgery, found that the presence of excess Usp16 caused skin cells from unaffected people to grow more slowly. Furthermore, neural progenitor cells (those self-renewing cellular factories responsible for the development and maintenance of many of the cell types in the brain) were less able to form balls of cells called neurospheres — a laboratory test that reflects the number and robustness of nerve stem cells in a culture. Conversely, reducing Usp16 expression in skin and nerve-progenitor cells from people with Down syndrome allowed the cells, which usually proliferate slowly, to assume normal growth patterns.

“This gene is clearly regulating processes that are central to aging in mice and humans,” said Clarke, “and stem cells are severely compromised. Reducing Usp16 expression gives an unambiguous rescue at the stem cell level. The fact that it’s also involved in this human disorder highlights how critical stem cells are to our well-being.”

Adorno and Clarke didn’t set out to study Down syndrome. Clarke’s past research has focused on how normal stem cells and cancer stem cells regenerate themselves, and Adorno was searching for genes that could inhibit a specific molecular pathway involved in the self-renewal of these cells. Understanding how normal stem cells regenerate themselves could help to repair tissue and organ damage from disease, and understanding how cancer stem cells maintain themselves could help explain why they are unusually resistant to chemotherapy or radiation therapy — often resulting in a patient’s relapse after seemingly successful treatment. Usp16 seemed to fit the bill; it plays a critical role in a self-renewal pathway previously identified by Clarke and his colleagues.

But Adorno and Clarke soon realized that Usp16 had another interesting property: in humans, it is found on chromosome 21.

They turned to Garner and Cheshier to help them evaluate a possible link to Down syndrome. Garner supplied two strains of mice commonly used to study the condition. One, Ts65Dn, has three copies of 132 genes found on human chromosome 21 — including Usp16. The second, Ts1Cje, has three copies of 79 genes from the chromosome, but only two copies of Usp16. Although both mice display some symptoms of the disorder, Ts65Dn more closely mimics the craniofacial structure and learning and memory disabilities seen in affected humans.

“We demonstrated that central nervous system stem cells in Down syndrome mice were defective in their ability to self-renew — the process by which stem cells regenerate themselves upon cell division. Blocking Usp16 expression in these cells restored this ability,” said Cheshier. “We hope in the future that correcting this Usp16 defect can lead to therapeutics that will ameliorate the central nervous system defects seen in patients with Down syndrome.”

Finally, the researchers created a new, Ts65Dn-derived mouse strain in which one of the three copies of Usp16 was mutated. This normalized the level of expression of that gene, without affecting the overexpression of the other 131 triplicated genes in these mice. Nerve progenitor cells from these mice were equally able as normal cells to form neurospheres. The researchers are now continuing their studies of these mice.

“We are really interested in learning how other genes in this chromosomal region may be affecting stem cell renewal,” said Clarke. “We also want to understand how much we’re able to rescue the neurological defect by normalizing the expression of Usp16 in this mouse model. How does this compare to what is happening in humans? We’re sure it plays some significant role.”

Notes about this neurogenetics and Down syndrome research

The research was funded by the California Institute for Regenerative Medicine, the National Institutes of Health (grant CA100225), the Fondazione Umberto Veronesi, the Department of Defense, the Down Syndrome Research and Treatment Foundation, Research Down Syndrome, the Fidelity Foundation and a Stanford Graduate Fellowship.