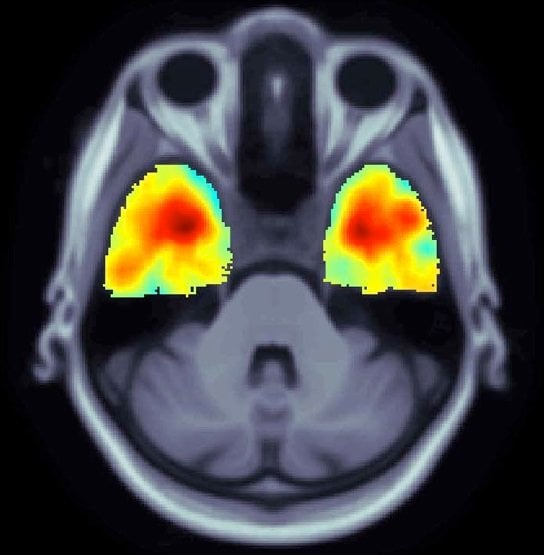 USC scientists show brain tissue loss in carriers of the Alzheimer's risk gene mutation on MRI at 24 months. The colored areas are the temporal lobes, and the red area is the front of the hippocampus, the area that typically degenerates the earliest if people have Alzheimer's disease. Areas colored red lose tissue fastest at about 3 percent per year. Credited to Paul M. Thompson/USC.
Home
Featured

“Silent time bomb”: Mutation appears to multiply the risk of Alzheimer’s by three or four times.

People who carry a genetic mutation associated with Alzheimer’s disease may develop the disease three years earlier than expected, according to a new study from Keck Medicine of USC.

Scientists at the Keck School of Medicine of USC have mapped the effects of that genetic mutation, showing for the first time how the Alzheimer’s risk factor affects the living human brain. The discovery is detailed in the Oct. 17 edition of The New England Journal of Medicine alongside five other studies focused on the TREM2 gene variant, whose link to Alzheimer’s was first reported in January.

“Our lab studies the rate of brain tissue loss in elderly people, trying to discover factors that protect you as you age,” said Paul M. Thompson, Ph.D., USC professor of neurology, psychiatry, engineering, radiology and ophthalmology and the study’s principal investigator. “We have never seen such a dramatic effect as with this genetic variant. If you carry this genetic mutation, we’ve found that there is this wildfire of tissue loss in the brain.”

Healthy people typically lose less than 1 percent of their brain tissue a year, offset by normal tissue generation from mental stimulation, Thompson said. Symptoms of Alzheimer’s begin to manifest when approximately 10 percent of the brain’s tissue has eroded away.

“This is the first study to use brain scans to show what this gene variant does, and it’s very surprising,” Thompson said. “This gene speeds up brain loss at a terrific pace. Carriers of this genetic mutation, who comprise about 1 percent of the population, lose about 3 percent of their brain tissue per year. This is a silent time bomb in 1 percent of the world.”

Keck researchers found that mutation carriers lost 1.4 percent to 3.3 percent more of their brain tissue than non-carriers, and twice as fast. The loss appears to be concentrated in the brain’s temporal lobe and hippocampus, areas that play important roles in memory.

“This TREM2 mutation appears to multiply the risk of Alzheimer’s by three or four times, which is very useful information. Enrolling those people who carry the mutation in clinical trials for Alzheimer’s treatments could help us reach quicker and more meaningful results,” Thompson said.

Antidepressant Use and Infection During Pregnancy Linked to Neurodevelopmental Disorders