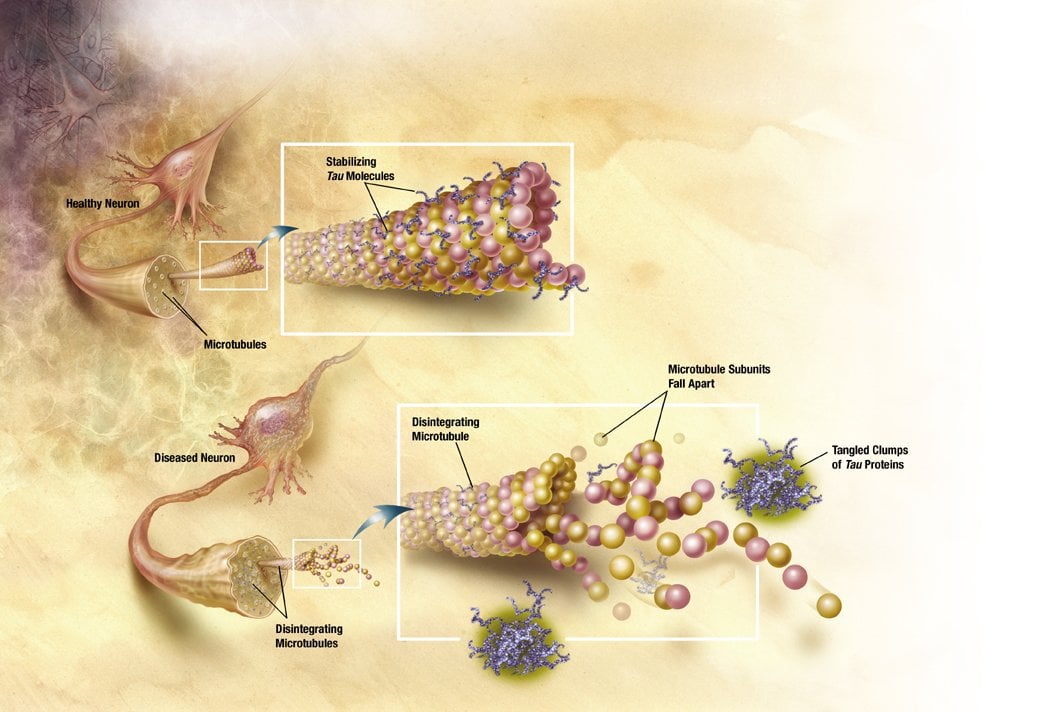 The study suggests that when the interaction between the phosphorylated tau and the amyloid-beta, particularly in its toxic form, happens at brain synapses, it can damage those synapses. And that can lead to cognitive decline in Alzheimer's patients. "Tangles" of tau occur in Alzheimer's patients' brains-causing neurons to lose their function and increasing memory loss. Credited to NIA/NIH
Home
Featured

New Alzheimer’s Research Suggests Possible Cause: The Interaction of Proteins in the Brain

Research shows interaction of tau and amyloid-beta in the brain may cause cognitive decline.

For years, Alzheimer’s researchers have focused on two proteins that accumulate in the brains of people with Alzheimer’s and may contribute to the disease: plaques made up of the protein amyloid-beta, and tangles of another protein, called tau.

The research, by Hemachandra Reddy, Ph.D., an associate scientist at the Oregon National Primate Research Center at Oregon Health & Science University, is detailed in the June 2013 edition of the Journal of Alzheimer’s Disease.

Reddy’s paper suggests that when the interaction between the phosphorylated tau and the amyloid-beta — particularly in its toxic form — happens at brain synapses, it can damage those synapses. And that can lead to cognitive decline in Alzheimer’s patients.

“This complex formation between amyloid-beta and tau — it is actually blocking the neural communication,” Reddy said. “If we could somehow find a molecule that could inhibit the binding of these two proteins at the synapses, that very well might be the cure to Alzheimer’s disease.”

To conduct the research, Reddy and his team studied three different kinds of mice, who had been bred to have some of the brain characteristics of Alzheimer’s disease, including having amyloid-beta and phosphorylated tau in their brains. Reddy also analyzed postmortem brain tissue from people who had Alzheimer’s disease.

Reddy found very little or no evidence of the same interaction in the “control” subjects — mice that did not have the Alzheimer’s traits and human brain tissue of people who did not have Alzheimer’s.

“So much Alzheimer’s research has been done to look at amyloid-beta and tau,” Reddy said. “But ours is the first paper to strongly demonstrate that yes, there is an amyloid-beta/phosphorylated tau interaction. And that interaction might be causing the synaptic damage and cognitive decline in persons with Alzheimer’s disease.”

Reddy and his lab are already working on the next crucial questions. One is to define the binding site or sites and exactly where within the neuron the interaction of amyloid-beta and tau first occurs. The second is to find a way to inhibit that interaction — and thus maybe prevent or slow the progression of Alzheimer’s.

Manczak was a co-author on the Journal of Alzheimer’s Disease article.