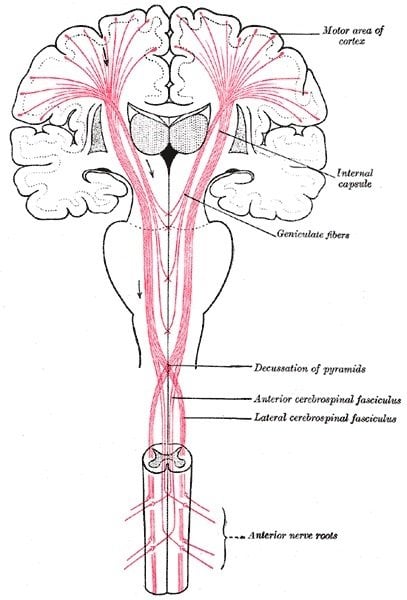 The motor neuron disease Amyotrophic lateral sclerosis (ALS), also known as Lou Gehrig’s Disease, progresses in a stepwise, sequential pattern which can be classified into four distinct stages, report pathologists with the Perelman School of Medicine at the University of Pennsylvania in the Annals of Neurology.

This post-mortem staging of ALS brain and spinal cord tissues shows, for the first time, how the fatal degenerative disease may progress from one starting point in the central nervous system to other regions of brain and spinal cord. As evidence mounts showing that other neurodegenerative diseases, such as Alzheimer’s and Parkinson’s, transmit disease-specific pathological proteins from cell-to-cell within the interconnected brain regions of affected individuals, this study suggests that a similar transmission process may be spreading toxic TDP-43 proteins and damaging motor neurons in the brain and spinal cord of ALS patients.

“Researchers at Penn and beyond can now start to investigate and try to confirm this transmission process in ALS, by looking for cell to cell transmission of TDP-43 in models of ALS,” said senior author John Trojanowski, MD, PhD, director of the Penn Institute on Aging and professor of Pathology and Laboratory Medicine at Penn. “If this transmission process can be identified and understood in ALS, this opens a new pathway for treatments, such as immunotherapies that could interrupt or block damaged and destructive proteins from corrupting other cells, thus halting the spread of disease.”

Researchers examined 76 autopsies of patients with ALS, measured pathological TPD-43 distribution and concentration in the nervous system, and were able to map out four distinct stages to assess the disease and burden of pathology.

The team evaluated genetic material in all but one of the ALS cases, and found that patients with a C9orf72 mutation had a shorter duration of disease (an average of 24 months vs 34 months in patients without the mutation), and while they had the same distribution pattern as ALS cases without the mutation, there was a greater buildup of pathology in each of the regions. 71 percent of patients with this C9orf72 mutation had a family history of ALS, frontotemporal degeneration (FTD) or another neurodegenerative disease, and 29 percent of cases with the C9orf72 mutation were apparently sporadic cases, lacking any ALS-linked genetic mutation.

The information gathered in these post-mortem autopsies mirrors what neurologists see in patients clinically. Future efforts may interrogate the process of disease progression further, work to identify biomarkers that can help detect the burden of disease in patients during life, and, most importantly,  home in on therapies to arrest the progression of ALS.

Notes about this ALS and neurodegeneration research