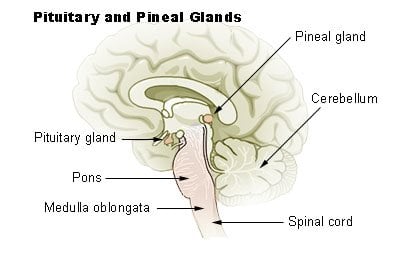 The results suggest that serotonin metabolism in the pineal gland may play a role in the underlying cause of depression and its treatment outcomes, based on the biochemical changes that were seen to be associated with improvements in depression. This image shows the location of the pineal gland in the brain.
Home
Featured

Biochemical Mapping Helps Explain Who Will Respond to Antidepressants

Duke Medicine researchers have identified biochemical changes in people taking antidepressants – but only in those whose depression improves. These changes occur in a neurotransmitter pathway that is connected to the pineal gland, the part of the endocrine system that controls the sleep cycle, suggesting an added link between sleep, depression and treatment outcomes.

The study, published on July 17, 2013, in the journal PLOS ONE, uses an emerging science called pharmacometabolomics to measure and map hundreds of chemicals in the blood in order to define the mechanisms underlying disease and to develop new treatment strategies based on a patient’s metabolic profile.

“Metabolomics is teaching us about the differences in metabolic profiles of patients who respond to medication, and those who do not,” said Rima Kaddurah-Daouk, PhD, associate professor of psychiatry and behavioral sciences at Duke Medicine and leader of the Pharmacometabolomics Research Network.

“This could help us to better target the right therapies for patients suffering from depression who can benefit from treatment with certain antidepressants, and identify, early on, patients who are resistant to treatment and should be placed on different therapies.”

Major depressive disorder – a form of depression characterized by a severely depressed mood that persists two weeks or more – is one of the most prevalent mental disorders in the United States, affecting 6.7% of the adult population in a given year.

Selective serotonin reuptake inhibitors (SSRIs) are the most commonly prescribed antidepressants for major depressive disorder, but only some patients benefit from SSRI treatment. Others may respond to placebo, while some may not find relief from either. This variability in response creates dilemmas for treating physicians where the only choice they have is to test one drug at a time and wait for several weeks to determine if a patient is going to respond to the specific SSRI.

Recent studies by the Duke team have used metabolomics tools to map biochemical pathways implicated in depression and have begun to distinguish which patients respond to treatment with an SSRI or placebo based on their metabolic profiles. These studies have pointed to several metabolites on the tryptophan metabolic pathway as potential contributing factors to whether patients respond to antidepressants.

Tryptophan is metabolized in different ways. One pathway leads to serotonin and subsequently to melatonin and an array of melatonin-like chemicals called methoxyindoles produced in the pineal gland. In the current study, the researchers analyzed levels of metabolites within branches of the tryptophan pathway and correlated changes with treatment outcomes.

Seventy-five patients with major depressive disorder were randomized to take sertraline (Zoloft) or placebo in the double-blind trial. After one week and four weeks of taking the SSRI or placebo, the researchers measured improvement in symptoms of depression to determine response to treatment, and blood samples were taken and analyzed using a metabolomics platform build to measure neurotransmitters.

The researchers observed that 60 percent of patients taking the SSRI responded to the treatment, and 50 percent of those taking placebo also responded. Several metabolic changes in the tryptophan pathway leading to melatonin and methoxyindoles were seen in patients taking the SSRI who responded to the treatment; these changes were not found in those who did not respond to the antidepressant.

The results suggest that serotonin metabolism in the pineal gland may play a role in the underlying cause of depression and its treatment outcomes, based on the biochemical changes that were seen to be associated with improvements in depression.

“This study revealed that the pineal gland is involved in mechanisms of recovery from a depressed state,” said Kaddurah-Daouk. “We have started to map serotonin which is believed to be implicated in depression, but now realize that it may not be serotonin itself that is important in depression recovery. It could be metabolites of serotonin that are produced in the pineal gland that are implicated in sleep cycles.

“Shifting utilization of tryptophan metabolism from kynurenine to production of melatonin and other methoxyindoles seems important for treatment response but some patients do not have this regulation mechanism. We can now start to think about ways to correct this.”

The identification of a metabolic signature for patients who have a milder form of depression and who can improve with use of placebo is critically important for streamlining clinical trials with antidepressants. The Duke team is the first to start to define in depth early biochemical effects of treatment with SSRI and placebo, and a molecular basis for why antidepressants take several weeks to start showing benefit.

In future studies, researchers may collect blood samples from patients during both the day and night to define how the circadian cycle, changes in sleep patterns, neurotransmitters and hormonal systems are modified in those who respond and do not respond to SSRIs and placebo. This can lead to more effective treatment strategies.

Notes about this neurochemistry and antidepressant research

Kaddurah-Daouk and several of the study authors hold patents in the metabolomics field. A full list of author disclosures can be found in the manuscript. The research was supported by the National Institute of General Medical Sciences (RC2-GM092729) and Pfizer.