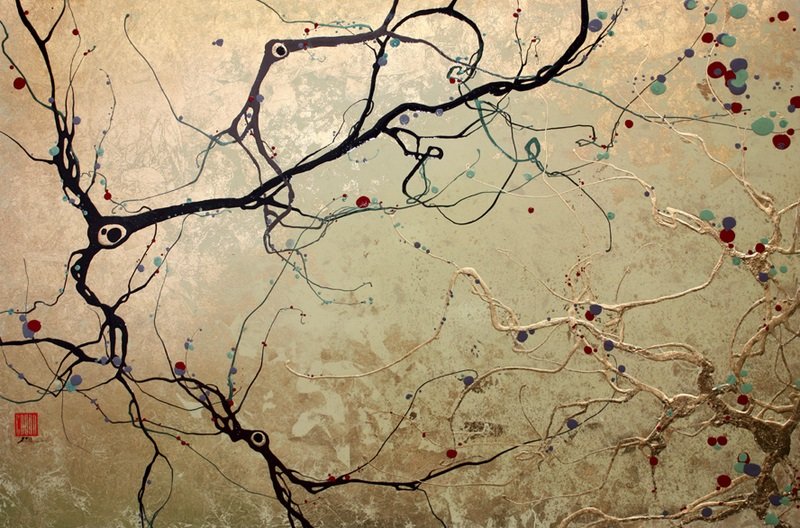 Researchers found LKB1 is crucially important in the later stage of neural development; the branching of the end of the axon onto dendrites and other neurons. This painting documents neurogenesis.
Home
Featured

Neuroscientists at The Scripps Research Institute (TSRI) have filled in a significant gap in the scientific understanding of how neurons mature, pointing to a better understanding of some developmental brain disorders.

In the new study, the researchers identified a molecular program that controls an essential step in the fast-growing brains of young mammals. The researchers found that this signaling pathway spurs the growth of neuronal output connections by a mechanism called “mitochondrial capture,” which has never been described before.

“Mutations that may affect this signaling pathway already have been found in some autism cases,” said TSRI Professor Franck Polleux, who led the research, published June 20, 2013 in the journal Cell.

Polleux’s laboratory is focused on identifying the signaling pathways that drive neural development, with special attention to the neocortex—a recently evolved structure that handles the “higher” cognitive functions in the mammalian brain and is highly developed in humans.

In a widely cited study published in 2007, Polleux’s team identified a trigger of an early step in the development of the most important class of neocortical neurons. As these neurons develop following asymmetric division of neural stem cells, they migrate to their proper place in the developing brain. Meanwhile they start to sprout a root-like mesh of input branches called dendrites from one end, and, from the other end, a long output stalk called an axon. Polleux and his colleagues found that the kinase LKB1 provides a key signal for the initiation of axon growth in these immature cortical neurons.

In the new study, Polleux’s team followed up this discovery and found that LKB1 also is crucially important for a later stage of these neurons’ development: the branching of the end of the axon onto the dendrites of other neurons.

“In experiments with mice, we knocked the LKB1 gene out of immature cortical neurons that had already begun growing an axon, and the most striking effect was a drastic reduction in terminal branching,” said Julien Courchet, a research associate in the Polleux laboratory who was a lead co-author of the study. “We saw this also in lab dish experiments, and when we overexpressed the LKB1 gene, the result was a dramatic increase in axon branching.”

Further experiments by Courchet showed that LKB1 drives axonal branching by activating another kinase, NUAK1. The next step was to try to understand how this newly identified LKB1-NUAK1 signaling pathway induced the growth of new axon branches.

Stopping the Train in Its Tracks

Following a thin trail of clues, the researchers decided to look at the dynamics of microtubules. These tiny railway-like tracks are laid down within axons for the efficient transport of molecular cargoes and are altered and extended during axonal branching. Although they could find no major change in microtubule dynamics within immature axons lacking LKB1 or NUAK1, the team did discover one striking abnormality in the transport of cargoes along these microtubules. Tiny oxygen-reactors called mitochondria, which are the principal sources of chemical energy in cells, were transported along axons much more actively—and by contrast, became almost immobile when LKB1 and NUAK1 were overexpressed.

But the LKB1-NUAK1 signals weren’t just immobilizing mitochondria randomly. They were effectively inducing their capture at points on the axons where axons form synaptic connections with other neurons. “When we removed LKB1 or NUAK1 in cortical neurons, the mitochondria were no longer captured at these points,” said Tommy Lewis, Jr., a research associate in the Polleux Laboratory who was co-lead author of the study.

“We argue that there must be an active ‘homing factor’ that specifies where these mitochondria stop moving,” said Polleux. “And we think that this is essentially what the LKB1-NAUK1 signaling pathway does here.”

Precisely how the capture of mitochondria at nascent synapses promotes axonal branching is the object of a further line of investigation in the Polleux laboratory. “We think that we have uncovered something very interesting about mitochondrial function at synapses,” Polleux said.

In addition to its basic scientific importance, the work is likely to be highly relevant medically. Developmentally related brain disorders such as epilepsy, autism and schizophrenia typically involve abnormalities in neuronal connectivity. Recent genetic surveys have found NUAK1-related gene mutations in some children with autism, for example. “Our study is the first one to identify that NUAK1 plays a crucial role during the establishment of cortical connectivity and therefore suggests why this gene might play a role in autistic disorder,” Polleux says.

He notes, too, that declines in normal mitochondrial transport within axons have been observed in neurodegenerative disorders such as Alzheimer’s and Parkinson’s diseases. “In the light of our findings, we wonder if the decreased mitochondrial mobility observed in these cases might be due not to a transport defect, but instead to a defect in mitochondrial capture in aging neurons,” he said. “We’re eager to start doing experiments to test such possibilities.”

Notes about this neural development and neuroscience research

Other contributors to the study, “Terminal Axon Branching Is Regulated by the LKB1-NUAK1 Kinase Pathway via Presynaptic Mitochondrial Capture,” were Sohyon Lee, Virginie Courchet and Deng-Yuan Liou of TSRI, and Shinichi Aizawa of the RIKEN Institute of Kobe, Japan.

The study was funded in part by the National Institutes of Health (grants R01AG031524 and 5F32NS080464), ADI-Novartis, Fondation pour la Recherche Medicale, and the Philippe Foundation.