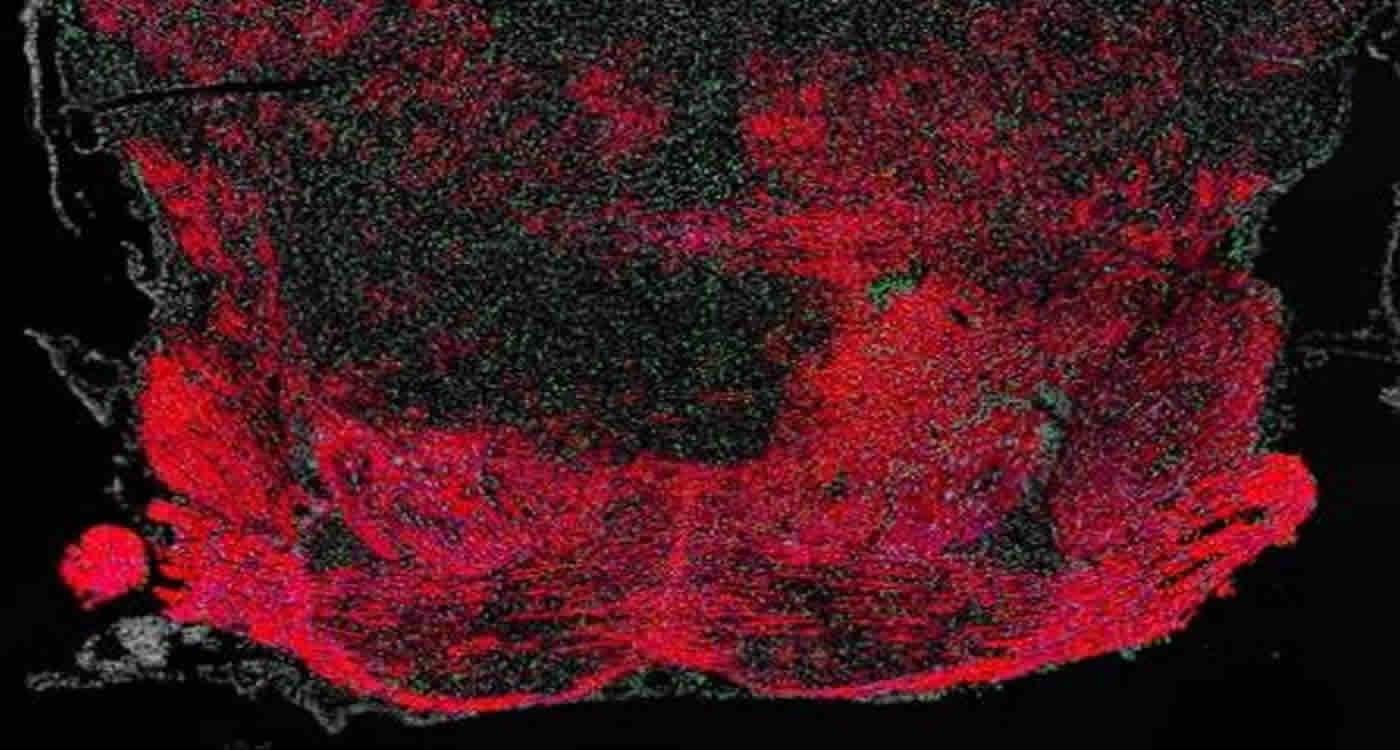 The brainstem of a myelin-deficient mouse that received a transplant of human OPCs a few days after birth and was then treated with the drug solifenacin. Daily treatment enhanced the capacity of human cells (labeled in green) to produce myelin (shown in red), which led to improved hearing in the mouse. Image credit: Fraser J. Sim, University at Buffalo.

The damage doesn’t come all at once: There is a “honeymoon” period during which some regeneration of myelin, called remyelination, does occur, but this ability to regenerate dissipates as the disease progresses and the patient ages.

Now, a University at Buffalo researcher has discovered a way to keep that kind of remyelination going, using a drug that’s already on the market.

A paper describing the research results was published this week in the Journal of Neuroscience.

“We have identified a new drug target that promotes stem cell therapy for myelin-based disease, such as MS,” says lead author Fraser J. Sim, PhD, assistant professor in the Department of Pharmacology and Toxicology in the University at Buffalo School of Medicine and Biomedical Sciences.

The study shows it is possible to boost myelination by targeting human oligodendrocyte progenitor cells with solifenacin, an anti-muscarinic drug that currently is approved and marketed to treat overactive bladder.

“Our hypothesis is that in MS, the oligodendrocyte progenitor cells seem to get stuck,” Sim explains. “When these cells don’t mature properly, they don’t differentiate into myelinating oligodendrocytes.”

In the new study, the approach Sim and his colleagues took was to first characterize the molecular pathways that govern the differentiation of human oligodendrocyte progenitor cells, and then identify drug candidates that would promote differentiation and myelin production.

They found that when a muscarinic type 3 receptor on human oligodendrocyte progenitor cells was activated, differentiation was completely blocked.

“So we thought, if we had something that blocks instead of activates this receptor, could we boost differentiation?” asks Fraser. To do that, the researchers turned to solifenacin, the anti-muscarinic drug for overactive bladder; the bladder muscle contains several muscarinic receptors.

“We were excited about this because solifenacin is an approved drug that’s already on the market,” says Sim.

But Sim and his colleagues needed a functional endpoint, a way to know that the myelin being made was being translated into improved behavior or function.

So Sim teamed up with Richard J. Salvi, PhD, SUNY Distinguished Professor in the Department of Communicative Disorders and Sciences, and director of UB’s Center for Hearing and Deafness.

Together, they determined that an auditory brainstem response, which records brain wave activity in response to sounds, would be appropriate.

Sim explains that it takes a certain amount of time for a signal to go from the ear to the front of the brain: “So in the readout, you get waves that should have a certain time pattern. When there isn’t enough myelin, the signaling slows down. And if you add myelin, you should see the signals speed up.”

The tests showed improvement in the response to auditory signals in animals transplanted with the human oligodendrocyte progenitor cells treated with solifenacin.

“We have identified a way to improve human myelination,” says Sim.

The promising results have prompted Sim and his colleagues to seek funding for a small human trial.

The study results are all preclinical and no human testing has been done yet.

About this multiple sclerosis research

The new study adds to Sim’s body of research on stem cells and myelination, which previously determined that a critical phase of remyelination fades with age.

Sim also is an investigator with other scientists at UB and the University of Rochester on the $12.1 million New York State Stem Cell Science award led by SUNY Upstate Medical Center. That research will test the safety and effectiveness of implanting stem cells that can produce myelin into the central nervous system of MS patients.