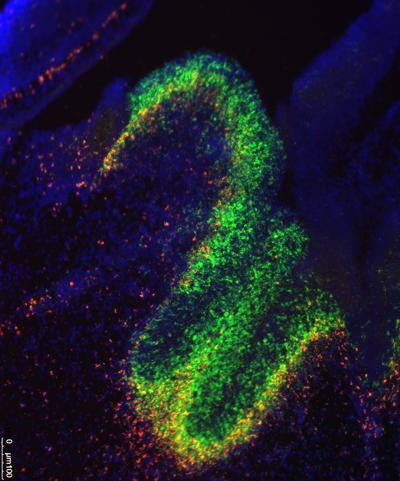 UCSF researchers have uncovered a role in brain development and in neurological disease for little appreciated molecules called long noncoding RNA. In this image, fluorescent dyes track the presence of the RNA molecules and the genes they affect in the developing mouse brain.Credited to Alexander Ramos UCSF.
Home
Featured

Specific DNA once dismissed as junk plays an important role in brain development and might be involved in several devastating neurological diseases, UC San Francisco scientists have found.

Their discovery in mice is likely to further fuel a recent scramble by researchers to identify roles for long-neglected bits of DNA within the genomes of mice and humans alike.

While researchers have been busy exploring the roles of proteins encoded by the genes identified in various genome projects, most DNA is not in genes. This so-called junk DNA has largely been pushed aside and neglected in the wake of genomic gene discoveries, the UCSF scientists said.

In their own research, the UCSF team studies molecules called long noncoding RNA (lncRNA, often pronounced as “link” RNA), which are made from DNA templates in the same way as RNA from genes.

“The function of these mysterious RNA molecules in the brain is only beginning to be discovered,” said Daniel Lim, MD, PhD, assistant professor of neurological surgery, a member of the Eli and Edythe Broad Center of Regeneration Medicine and Stem Cell Research at UCSF, and the senior author of the study, published online April 11 in the journal Cell Stem Cell.

Alexander Ramos, a student enrolled in the MD/PhD program at UCSF and first author of the study, conducted extensive computational analysis to establish guilt by association, linking lncRNAs within cells to the activation of genes.

Ramos looked specifically at patterns associated with particular developmental pathways or with the progression of certain diseases. He found an association between a set of 88 long noncoding RNAs and Huntington’s disease, a deadly neurodegenerative disorder. He also found weaker associations between specific groups of long noncoding RNAs and Alzheimer’s disease, convulsive seizures, major depressive disorder and various cancers.

“Alex was the team member who developed this new research direction, did most of the experiments, and connected results to the lab’s ongoing work,” Lim said. The study was mostly funded through Lim’s grant – a National Institutes of Health (NIH) Director’s New Innovator Award, a competitive award for innovative projects that have the potential for unusually high impact.

Unlike messenger RNA, which is transcribed from the DNA in genes and guides the production of proteins, lncRNA molecules do not carry the blueprints for proteins. Because of this fact, they were long thought to not influence a cell’s fate or actions.

Nonetheless, lncRNAs also are transcribed from DNA in the same way as messenger RNA, and they, too, consist of unique sequences of nucleic acid building blocks.

Evidence indicates that lncRNAs can tether structural proteins to the DNA-containing chromosomes, and in so doing indirectly affect gene activation and cellular physiology without altering the genetic code. In other words, within the cell, lncRNA molecules act “epigenetically” — beyond genes — not through changes in DNA.

The brain cells that the scientists focused on the most give rise to various cell types of the central nervous system. They are found in a region of the brain called the subventricular zone, which directly overlies the striatum. This is the part of the brain where neurons are destroyed in Huntington’s disease, a condition triggered by a single genetic defect.

Ramos combined several advanced techniques for sequencing and analyzing DNA and RNA to identify where certain chemical changes happen to the chromosomes, and to identify lncRNAs on specific cell types found within the central nervous system. The research revealed roughly 2,000 such molecules that had not previously been described, out of about 9,000 thought to exist in mammals ranging from mice to humans.

Best Evidence Yet That Lowering Blood Pressure Can Prevent Dementia

In fact, the researchers generated far too much data to explore on their own. The UCSF scientists created a website through which their data can be used by others who want to study the role of lncRNAs in development and disease.

“There’s enough here for several labs to work on,” said Ramos, who has training grants from the California Institute for Regenerative Medicine (CIRM) and the NIH.

“It should be of interest to scientists who study long noncoding RNA, the generation of new nerve cells in the adult brain, neural stem cells and brain development, and embryonic stem cells,” he said.