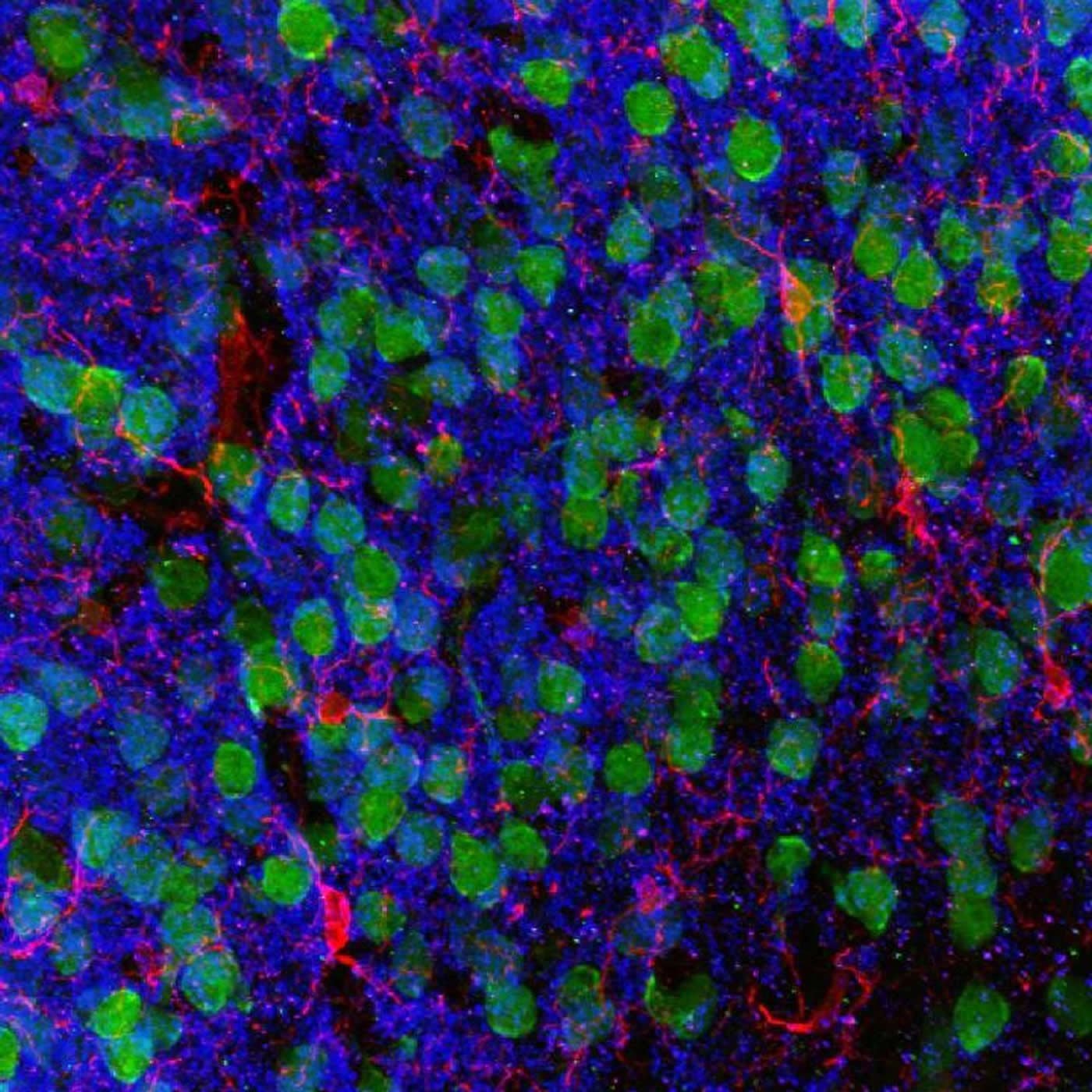 Summary: Mice bred to be germ-free, and those treated with antibiotics showed a significant reduction in the ability to learn that a threatening danger was no longer present. Sequencing the RNA of microglia in the brains of the animals reveals altered gene expression in the immune cells, which play a role in remodeling how neurons connect during the learning process. Restoring the gut microbiota reverse the learning problems.

New cellular and molecular processes underlying communication between gut microbes and brain cells have been described for the first time by scientists at Weill Cornell Medicine and Cornell’s Ithaca campus.

“Our study provides new insight into the mechanisms of how the gut and brain communicate at the molecular level,” said co-senior author Dr. David Artis, director of the Jill Roberts Institute for Research in Inflammatory Bowel Disease, director of the Friedman Center for Nutrition and Inflammation and the Michael Kors Professor of Immunology at Weill Cornell Medicine.

“No one yet has understood how IBD and other chronic gastrointestinal conditions influence behavior and mental health. Our study is the beginning of a new way to understand the whole picture.”

For the study, published Oct. 23 in Nature, the researchers used mouse models to learn about the changes that occur in brain cells when gut microbiota are depleted. First author Dr. Coco Chu, a postdoctoral associate in the Jill Roberts Institute for Research in Inflammatory Bowel Disease, led a multidisciplinary team of investigators from several departments across Weill Cornell Medicine, Cornell’s Ithaca campus, Boyce Thompson Institute, Broad Institute at MIT and Harvard, and Northwell Health with specialized expertise in behavior, advanced gene sequencing techniques and the analysis of small molecules within cells.

Mice treated with antibiotics to reduce their microbial populations, or that were bred to be germ-free, showed a significantly reduced ability to learn that a threatening danger was no longer present. To understand the molecular basis of this result, the scientists sequenced RNA in immune cells called microglia that reside in the brain and discovered that altered gene expression in these cells plays a role in remodeling how brain cells connect during learning processes. These changes were not found in microglia of healthy mice.

“Changes in gene expression in microglia could disrupt the pruning of synapses, the connections between brain cells, interfering with the normal formation of new connections that should occur through learning,” said co-principal investigator Dr. Conor Liston, an associate professor of neuroscience in the Feil Family Brain & Mind Research Institute and an associate professor of psychiatry at Weill Cornell Medicine.

The team also looked into chemical changes in the brain of germ-free mice and found that concentrations of several metabolites associated with human neuropsychiatric disorders such as schizophrenia and autism were changed. “Brain chemistry essentially determines how we feel and respond to our environment, and evidence is building that chemicals derived from gut microbes play a major role”, said Dr. Frank Schroeder, a professor at the Boyce Thompson Institute and in the Chemistry and Chemical Biology Department at Cornell Ithaca.

Next, the researchers tried to reverse the learning problems in the mice by restoring their gut microbiota at various ages from birth. “We were surprised that we could rescue learning deficits in germ-free mice, but only if we intervened right after birth, suggesting that gut microbiota signals are required very early in life,” said Dr. Liston. “This was an interesting finding, given that many psychiatric conditions that are associated with autoimmune disease are associated with problems during early brain development.”

“The gut-brain axis impacts every single human being, every day of their lives,” said Dr. Artis. “We are beginning to understand more about how the gut influences diseases as diverse as autism, Parkinson’s disease, post-traumatic stress disorder and depression. Our study provides a new piece of understanding of how the mechanisms operate.”

“We don’t know yet, but down the road, there is a potential for identifying promising targets that might be used as treatments for humans in the future,” Dr. Liston said. “That’s something we will need to test going forward.”

Believe It or ‘Nut’, Almonds Can Help You Cut Calories

Multicellular organisms have co-evolved with complex consortia of viruses, bacteria, fungi and parasites, collectively referred to as the microbiota1. In mammals, changes in the composition of the microbiota can influence many physiologic processes (including development, metabolism and immune cell function) and are associated with susceptibility to multiple diseases2. Alterations in the microbiota can also modulate host behaviours—such as social activity, stress, and anxiety-related responses—that are linked to diverse neuropsychiatric disorders3. However, the mechanisms by which the microbiota influence neuronal activity and host behaviour remain poorly defined. Here we show that manipulation of the microbiota in antibiotic-treated or germ-free adult mice results in significant deficits in fear extinction learning. Single-nucleus RNA sequencing of the medial prefrontal cortex of the brain revealed significant alterations in gene expression in excitatory neurons, glia and other cell types. Transcranial two-photon imaging showed that deficits in extinction learning after manipulation of the microbiota in adult mice were associated with defective learning-related remodelling of postsynaptic dendritic spines and reduced activity in cue-encoding neurons in the medial prefrontal cortex. In addition, selective re-establishment of the microbiota revealed a limited neonatal developmental window in which microbiota-derived signals can restore normal extinction learning in adulthood. Finally, unbiased metabolomic analysis identified four metabolites that were significantly downregulated in germ-free mice and have been reported to be related to neuropsychiatric disorders in humans and mouse models, suggesting that microbiota-derived compounds may directly affect brain function and behaviour. Together, these data indicate that fear extinction learning requires microbiota-derived signals both during early postnatal neurodevelopment and in adult mice, with implications for our understanding of how diet, infection, and lifestyle influence brain health and subsequent susceptibility to neuropsychiatric disorders.