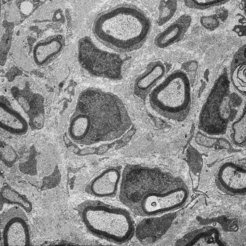 Electron microscope image of a cross-section through a mouse nerve: following injury, the myelin sheath of numerous regenerated nerve fibres is too thin. Image credited to MPI of Experimental Medicine.
Home
Featured

Glial Cells Assist in the Repair of Injured Nerves

When a nerve is damaged, glial cells produce the protein neuregulin1 and thereby promote the regeneration of nerve tissue.

Unlike the brain and spinal cord, the peripheral nervous system has an astonishing capacity for regeneration following injury. Researchers at the Max Planck Institute of Experimental Medicine in Göttingen have discovered that, following nerve damage, peripheral glial cells produce the growth factor neuregulin1, which makes an important contribution to the regeneration of damaged nerves.

From their cell bodies to their terminals in muscle or skin, neuronal extensions or axons in the peripheral nervous system are surrounded along their entire length by glial cells. These cells, which are known as Schwann cells, envelop the axons with an insulating sheath called myelin, which enables the rapid transmission of electrical impulses. Following injury to a peripheral nerve, the damaged axons degenerate. After a few weeks, however, they regenerate and are then recovered with myelin by the Schwann cells. For thus far unexplained reasons, however, the Schwann cells do not manage to regenerate the myelin sheaths completely. Thus the function of damaged nerves often remains permanently impaired and certain muscles remain paralysed in affected patients.

In a current research study, the scientists have succeeded in showing that the growth factor neuregulin1 supports nerve repair and the redevelopment of the myelin layer. This protein is usually produced by neurons and is localised on axons where it acts as an important signal for the maturation of Schwann cells and myelin formation. Because the axons rapidly degenerate after injury, the remaining Schwann cells lose their contact with the axons. They thus lack the neuregulin1 signal of the nervous fibres. “In the phase following nerve damage, in which the axons are missing, the Schwann cells must carry out many tasks without the help of axonal signals. If the Schwann cells cannot overcome this first major obstacle in the aftermath of nerve injury, the nerve cannot be adequately repaired,” explains Ruth Stassart, one of the study authors.

The researchers would now like to examine in greater detail how the Schwann cells contribute to the complete repair of myelinated axons after nerve damage, so that this information can also be used for therapeutic purposes.