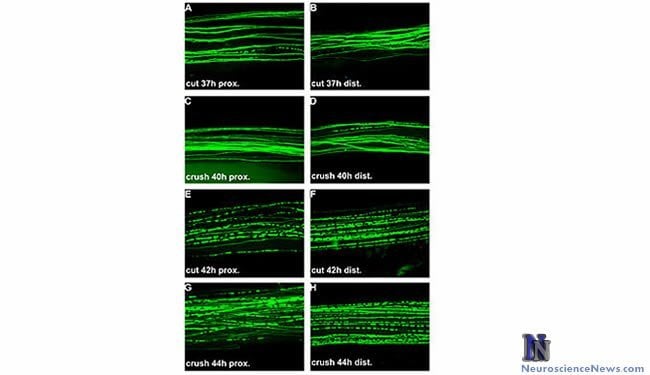 Findings could have broad therapeutic potential for many neurodegenerative diseases.

Degeneration of the axon and synapse, the slender projection through which neurons transmit electrical impulses to neighboring cells, is a hallmark of some of the most crippling neurodegenerative and brain diseases such as amyotrophic lateral sclerosis (ALS), Huntington’s disease and peripheral neuropathy. Scientists have worked for decades to understand axonal degeneration and its relation to these diseases.

Now, researchers at UMass Medical School are the first to describe a gene—dSarm/Sarm1—responsible for actively promoting axon destruction after injury. The research, published online by Science, provides evidence of an exciting new therapeutic target that could be used to delay or even stop axon decay.

“This discovery has the potential to have a profound impact on our understanding of neurodegenerative diseases, much like the discovery of apoptosis (programmed cell death) fundamentally changed our understanding of cancer,” said Marc R. Freeman, PhD, associate professor of neurobiology and lead investigator on the study. “Identification of this gene allows us to start asking exciting new questions about the role of axon death in neurodegenerative diseases. For example, is it possible that these pathways are being inappropriately activated to cause premature axon death?”

For more than a century, scientists believed that injured axons severed from the neuron cell body passively wasted away due to a lack of nutrients. However, a mouse mutation identified in the early 1990s—called slow Wallerian degeneration (Wlds)—was able to suppress axon degeneration for weeks. This finding forced scientists to reassess Wallerian degeneration, the process through which an injured axon degenerates, as a passive process and consider the possibility that an active program of axon auto-destruction, akin to apoptotic death, was at work instead.

If Wallerian degeneration was an active process, hypothesized Dr. Freeman, a Howard Hughes Medical Institute Early Career Scientist, then it should be possible through forward genetic screens in Drosophila to identify mutants exhibiting Wlds-like axon protection. Freeman and colleagues screened more than 2,000 Drosophilamutants for ones that exhibited long-term survival of severed axons. Freeman says this was a heroic effort on the part of his colleagues. The screen took place over the next two and a half years, and involved seven students and post-docs in the Freeman lab—Jeannette M. Osterloh; A. Nicole Fox, PhD; Michelle A. Avery, PhD; Rachel Hackett; Mary A. Logan, PhD; Jennifer M. MacDonald; and Jennifer S. Zeigenfuss—who performed the painstaking and labor-intensive experiments needed on each Drosophila mutant to identify flies that suppressed axonal degeneration after nerve injury.

Through these tests, they identified three mutants (out of the 2,000 screened) where severed axons survived for the lifespan of the fly. Next generation sequencing and chromosome deficiency mapping techniques were then used to isolate the single gene affected in all three—dSarm. These were loss-of-function alleles, meaning thatDrosophila unable to produce the dSarm/Sarm1 molecule exhibited prolonged axon survival for as many as 30 days after injury. Freeman and colleagues went on to show that mice lacking Sarm1, the mammalian homolog of dSarm, also displayed remarkable preservation of injured axons. These findings provided the first direct evidence that Wallerian degeneration was driven by a conserved axonal death program and not a passive response to axon injury.

“For 20 years people have been looking for a gene whose normal function is to promote axon degeneration,” said Osterloh, first author on the study. “Identification of the dSarm/Sarm1 gene has enormous therapeutic potential, for example as a knockdown target for patients suffering from diseases involving axonal loss.”

The next step for Freeman and colleagues is to identify additional genes in the axon death pathway and investigate whether any have links with specific neurodegenerative diseases. “We’re already working with scientists at UMMS to understand the role axon death plays in ALS and Huntington’s disease,” said Freeman. “We are very excited about the possibility that these findings could have broad therapeutic potential in many neurodegenerative diseases.”

Notes about this neuroscience research and article