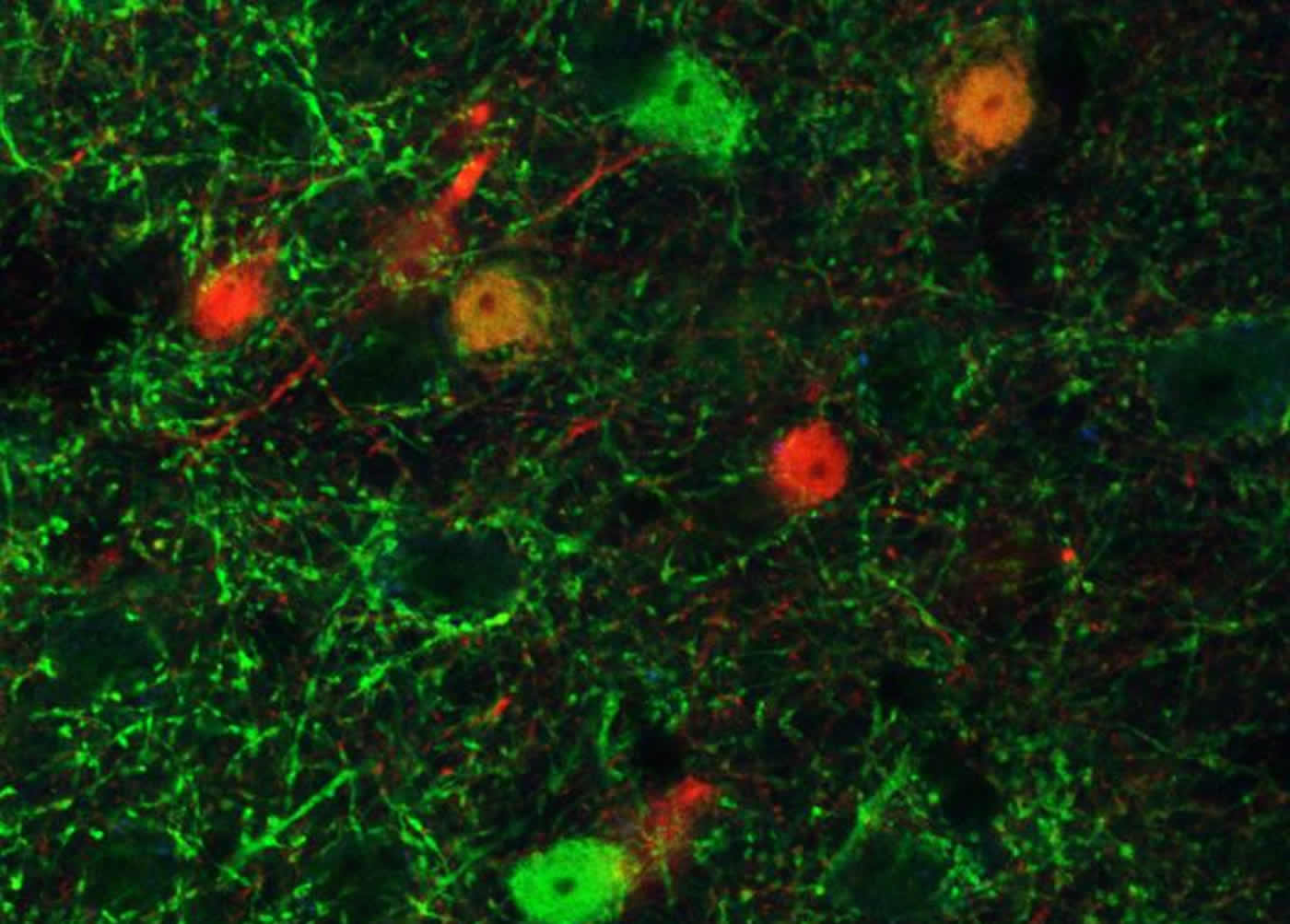 These are microscope images of SST+ interneurons from a control brain (left) and a mutant brain with the GABA receptor disabled (right). The cells are stained with fluorescent dyes labeling the GABA receptor (green), an associated scaffolding protein (red), and the cell body (blue). Loss of green and red staining in the mutant indicates the loss of GABA inhibition in these cells, which leads to antidepressant activity. NeuroscienceNews.com image is credited to Luscher laboratory, Penn State University.

Summary: According to a new study, experimentally increasing the activity of a subclass of nerve cells that produce GABA has an antidepressant effect in mice.

Experimentally increasing the activity of a subclass of nerve cells that produce the neurotransmitter gamma-aminobutyric acid (GABA) has antidepressant effects similar to pharmaceutical antidepressants in depressed mice. The discovery lends new credence to the idea that GABA-enhancing drugs could serve as rapidly acting and more effective antidepressants. A paper describing the research, led by Penn State scientists, appears online in the journal Molecular Psychiatry on November 8, 2016.

“GABA is the major inhibitory neurotransmitter in the brain — it acts as the “brakes” of neural activity — and its dysfunction is implicated in a wide range of neuropsychiatric disorders,” said Bernhard Lüscher, professor of biology and of biochemistry and molecular biology at Penn State and the leader of the research team. “Increasing evidence suggests that dysfunction of GABA is also a major culprit in major depressive disorder, the most common and costly brain disorder and a principal cause of suicide, the primary cause of death among young people.”

The researchers increased GABA signaling by disabling a GABA receptor in a specific set of neurons that are suspected to be involved in major depressive disorder. Under normal circumstances, this set of neurons known as SST+ interneurons (somatostatin-positive-GABAergic interneurons) produce GABA, which reduces the activity of other neurons around them. Most of these surrounding neurons release the neurotransmitter, glutamate — an “accelerator” of neuron activity. When the researchers disabled the GABA receptor selectively in SST+ interneurons, these cells could no longer receive the signal to slow down — their “brakes” were removed — so they released GABA excessively, which in turn slowed even further the activity of glutamate-producing neurons. As a result, the mice who received this treatment acted in a number of behavioral tests as if they had been given antidepressant drugs. Moreover, biochemical changes in brain tissue of the genetically altered mice mimicked biochemical changes previously observed in rodents subjected to pharmacological treatment with different classes of antidepressant drugs.

“Interestingly, drugs that are designed to increase the function of GABA — the benzodiazepines — are widely used as potent anti-anxiety drugs and sedatives, but for reasons that are poorly understood these drugs are largely ineffective as antidepressants,” said Lüscher. “The failure of benzodiazepines to alleviate depressive symptoms is a main reason why GABA-signaling deficits have been discounted as possible causes of depressive disorders. But our research suggests that GABA is involved and that there must be other reasons for the failure of benzodiazepines.”

Currently used antidepressants are designed to enhance the function of serotonin, or less often, norepinephrine. These drugs are ineffective for about 40 percent of patients and they suffer from a characteristically slow therapeutic onset, taking weeks before patients notice any significant improvement. This slow mode of therapeutic action indicates that the mechanism of these drugs is only distantly related to their direct targets. Instead, the current work suggests that these drugs ultimately act by enhancing the function of GABA-releasing interneurons. Indeed, earlier research in the Lüscher lab has shown that these drugs can alleviate a depressive-like brain state in mice that was induced by genetic defects in GABA transmission. Thus, antidepressants that act through serotonin or norepinephrine ultimately appear to normalize defects in GABA transmission, suggesting that new drugs that target GABA signaling may be effective antidepressants.

“The GABA-producing neurons we manipulated in this research are characterized by expression of a neuropeptide known as somatostatin and they represent about 30 percent of all GABA-producing cells in the forebrain,” said Lüscher. “These cells have recently been implicated in major depression based on gene-expression changes found in postmortem brain tissue from depressed patients, and they differ from other GABA-producing cells in that they selectively innervate the dendritic trees of glutamate-releasing neurons. The somatostatin-positive subset of GABA-releasing cells therefore appear ideally suited to limit the overexcitation of neural networks that occurs during the chronically stressful situations that figure as major culprits in depressive disorders.”

The results of the research lend new credence to the idea that GABA-enhancing drugs could serve as effective, rapidly acting antidepressants. However, it appears to be essential that these drugs selectively enhance the activity of the somatostatin-positive subset of GABA-producing cells or the subset of GABA receptors that mediate the response to GABA signaling originating from these cells.

Funding: In addition to Lüscher, the research team includes Thomas Fuchs, Sarah J. Jefferson, and Pei Hsuan Patricia Lee at Penn State, and Andrew Hooper and Jamie Maguire at Tufts University. The research was funded by the National Institute of Mental Health and the National Institute of Neurological Disorders and Stroke. It also received support from Penn State’s Huck Institutes of the Life Sciences, where he is the director of its Center for Molecular Investigation of Neurological Disorders.

Major depressive disorder (MDD) is associated with reduced concentrations of γ-aminobutyric acid (GABA) that are normalized by antidepressant therapies. Moreover, depressive-like phenotypes of GABAA receptor mutant mice can be reversed by treatment with conventional antidepressants drugs, as well as by subanesthetic doses of ketamine. Thus GABAergic deficits may causally contribute to depressive disorders, while antidepressant therapies may enhance GABAergic synaptic transmission. Here we tested the hypothesis that sustained enhancement of GABAergic transmission alone is sufficient to elicit antidepressant-like behavior, using disinhibition of GABAergic interneurons. We focused on somatostatin-positive (SST+) GABAergic interneurons because of evidence that their function is compromised in MDD. To disinhibit SST+ interneurons, we inactivated the γ2 subunit gene of GABAA receptors selectively in these neurons (SSTCre:γ2f/f mice). Loss of inhibitory synaptic input resulted in increased excitability of SST+ interneurons. In turn, pyramidal cell targets of SST+ neurons showed an increased frequency of spontaneous inhibitory postsynaptic currents. The behavior of SSTCre:γ2f/f mice mimicked the effects of anxiolytic and antidepressant drugs in a number of behavioral tests, without affecting performance in a spatial learning- and memory-dependent task. Finally, brain extracts of SSTCre:γ2f/f mice showed decreased phosphorylation of the eukaryotic elongation factor eEF2, reminiscent of the effects of ketamine. Importantly, these effects occurred without altered activity of the mammalian target of rapamycin pathway nor did they involve altered expression of SST. However, they were associated with reduced Ca2+/calmodulin-dependent auto-phosphorylation of eEF2 kinase, which controls the activity of eEF2 as its single target. Thus enhancing GABAergic inhibitory synaptic inputs from SST+ interneurons to pyramidal cells and corresponding chronic reductions in the synaptic excitation:inhibition ratio represents a novel strategy for antidepressant therapies that reproduces behavioral and biochemical end points of rapidly acting antidepressants.