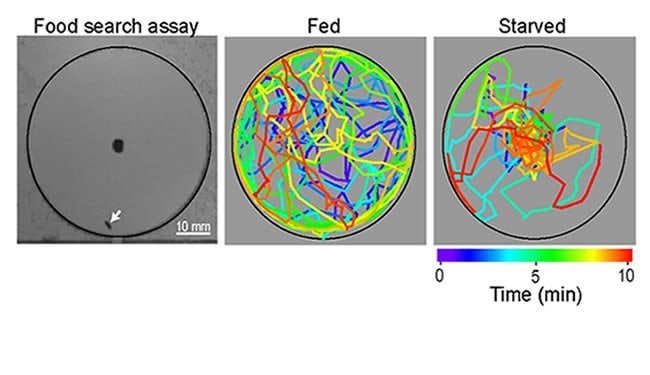 Biologists at UC San Diego have identified the molecular mechanisms triggered by starvation in fruit flies that enhance the nervous system’s response to smell, allowing these insects and presumably vertebrates—including humans—to become more efficient and voracious foragers when hungry.

Their discovery of the neural changes that control odor-driven food searches in flies, which they detail in a paper in the April 1 issue of the journal Cell, could provide a new way to potentially regulate human appetite.

By developing drugs to enhance or minimize the activity of nerve-signaling chemicals called neuropeptides released during starvation to enhance the sense of smell, scientists may be able to decrease the propensity among obese individuals to overeat when encountering delectable food odors, if similar molecular mechanisms exist in humans. They could also increase the appetites among the infirm, elderly and others who may have problems eating enough. The method could even be used to improve the growth of farmed animals or to reduce feed waste.

“Olfaction makes important contributions to the perception of food quality and profoundly influences our dietary choices,” said Jing Wang, an associate professor of biology at UC San Diego who headed the research effort. His team identified a neuropeptide and a receptor neuron controlling the olfactory behavior in the fly that could be targeted by drugs to effect changes in appetite that are normally regulated by an organism’s insulin levels, which changes radically when organisms are satiated or starved.

While scientists had previously identified similar neuropeptides that control feeding behavior in vertebrates, not much was known until now about how these molecules control olfaction or an organism’s behavior. Researchers had previously found that the injection into the hypothalamus of insulin, the hormone that regulates blood glucose levels, reduces food intake in rodents, for example, but how insulin affects olfactory circuits in a way that altered an organism’s behavior was not well understood.

Wang and his team of UCSD biologists—Cory Root, Kang Ko and Amir Jafari—believed that by looking at the molecular mechanisms that enable fruit flies to improve their search for food when their insulin levels were low following a period of starvation the scientists would obtain a better understanding of this process. They used a computerized system to monitor over time the position of starved or well-fed flies as the flies circled around a droplet of apple cider vinegar, which served as a delectable food source.

“During the 10 min observation period,” the researchers wrote in their paper, “starved flies spend most of the time walking near the food source, whereas fed flies wander in the entire arena with a preference for the perimeter.”

The researchers found that surgical removal of the antennae used by the flies to sense odor destroyed the propensity of starved flies to hone in on the food source as did genetically suppressing the production of short neuropeptide F receptors, which the scientists found, increases in response to starvation or a drop in insulin levels. Using two-photon microscopy, a state-of-the-art imaging system, the researchers found starvation-dependent changes of olfactory response in specific neurons.

“The notion that starvation modulation at the peripheral olfactory system is linked to insulin signaling has potential implications for the therapeutic intervention of the seemingly unstoppable obesity epidemic trend in a large percentage of the population,” said Wang.

He said his team’s study has identified the insulin receptor, PI3K, and the short neuropeptide F receptor, which is also modulated by insulin levels, as potential molecular targets for controlling appetite in humans and other vertebrates. However, he added that more research is needed to know whether and to what extent insulin levels control olfactory sensitivity in human.

The Surprisingly Simple Arithmetic of Smell

“Learning how olfactory neural circuits impact dietary choices is relevant towards better understanding factors that contribute to obesity and eating disorders,” he added.

Based on their findings, the UCSD biologists have filed a patent application on their discovery, contending that blocking PI3K, a signaling molecule of the insulin receptor, could improve appetites in the infirm and elderly and that the intranasal delivery of insulin could decrease appetite in obese individuals. They also contend in their patent application that suppressing PI3K will increase feeding in farmed animals and reduce feed waste.

The researchers’ work was funded by the National Institute on Deafness and Other Communication Disorders.