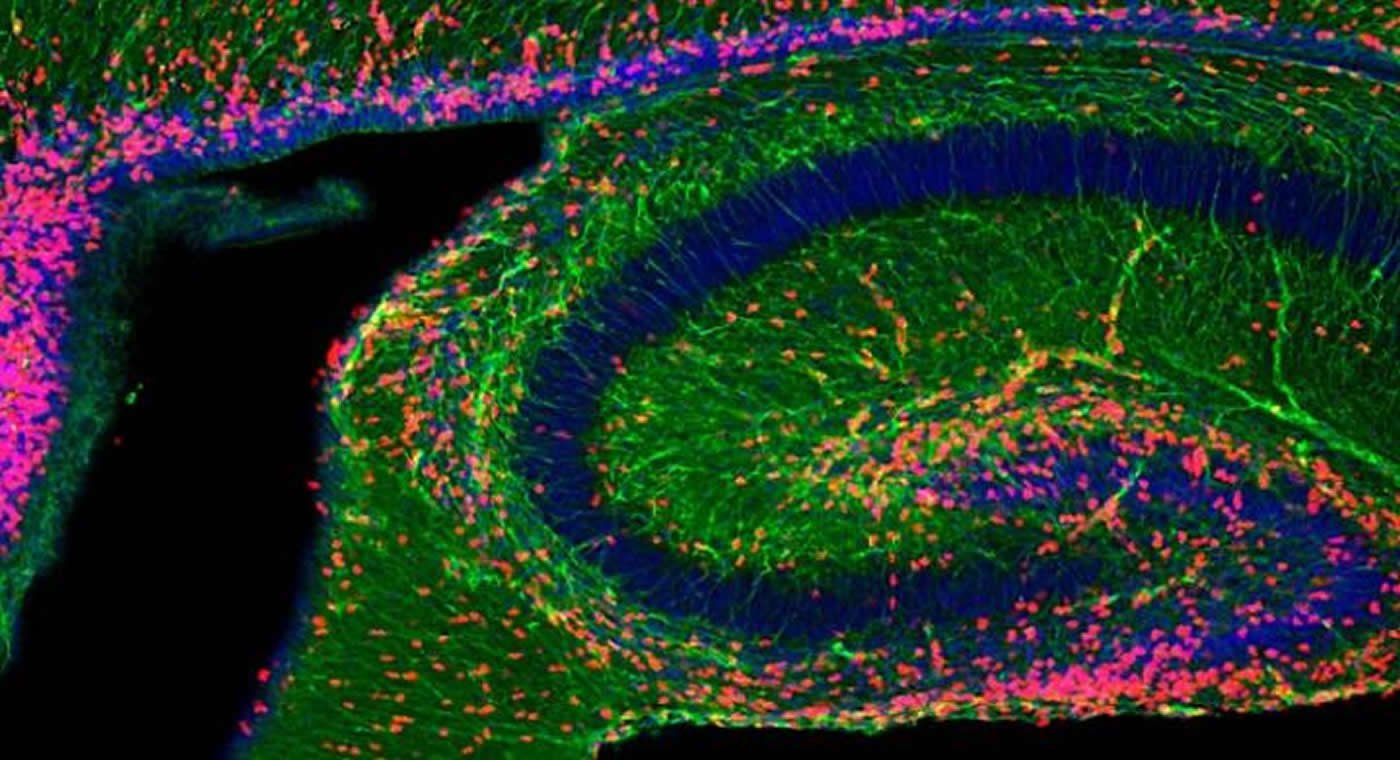 Neuron proliferation increased in the developing hippocampus of a mouse following an injection of neuronal exosomes. (Cell proliferation seen here in red.) The image is credited to Cline lab at Scripps Research, La Jolla, California.

Like overpacked suitcases unloaded from the underbelly of a jet, molecular satchels called exosomes are continuously deployed from all cells in the body—each one brimming with an assortment of contents that another cell may unpack and use. By sending off these biological parcels, cells communicate with each other via shared proteins and genetic material.

Once simply thought to be microscopic sacks of cellular “garbage,” exosomes are now understood to hold immense importance for our health. An outflowing of research in recent years has even shown they can transport molecules that are linked to the spread of cancer and neurodegenerative disorders such as Alzheimer’s. Yet, until recently, their role in brain development remained a mystery.

In new research published in Proceedings of the National Academy of Sciences, Hollis Cline, Ph.D., and her colleagues at Scripps Research begin to close that knowledge gap by showing that exosomes are not only integral to the development of neurons and neural circuits, but they can restore health to brain cells affected by developmental disease.

“During different stages of brain development, signaling between cells is absolutely essential,” says Cline, co-chair of the Department of Neuroscience at Scripps Research and director of the Dorris Neuroscience Center.

“We found that exosomes are one of the ways cells communicate these signals.”

Our bodies use spherical containers called “vesicles” to traffic different materials within and among cells. Exosomes are a type of vesicle tasked specifically with transporting various biological cargo—lipids, proteins, RNA—from one cell to another. Cline’s research determined that proteins, in particular, were responsible for the cell-to-cell signaling capabilities of exosomes.

Her research team examined exosomes from healthy human neurons and those from a disease model of Rett syndrome, a genetically-driven developmental brain disorder that causes autism-like symptoms.

Pranav Sharma, Ph.D., a neuroscientist in Cline’s lab, designed experiments to clearly identify and compare exosome bioactivity from healthy neurons and diseased neurons. Through multiple cellular and functional assays, they found that the Rett-affected exosomes didn’t contain any harmful proteins, but also didn’t have essential signaling proteins found in healthy exosomes. “They did not have bad stuff, but lacked the good stuff,” Sharma says.

As part of the experiment, the team used CRISPR gene-editing technology to correct the mutation that causes Rett syndrome and then examined whether the signaling functions of the neural exosomes were restored as a result. “Fixing the mutation reversed the deficits,” Sharma says.

They also tested whether adding healthy exosomes to a culture-dish model of Rett syndrome would provide a therapeutic effect. It did.

“That was perhaps our most exciting finding: that exosomes from healthy cells can indeed rescue neurodevelopmental deficiencies in cells with Rett syndrome,” Cline said. “We see this as very promising because of the many neurodevelopmental disorders in need of treatment. These are disorders for which we already have a deep understanding of the underlying gene deficiencies but are still lacking a therapy to address the disease itself.”

Sharma says the study relied on human neurons derived from induced pluripotent stem cells (iPSCs) from Rett patients. For this aspect of the experiment, the team drew on the expertise of Alysson Muotri, Ph.D., a neuroscience and stem cell specialist at the University of California, San Diego. To obtain the rich and quantifiable proteomic data needed to characterize the exosomes, the team collaborated with several others from Scripps Research, including mass spectrometry pioneer John Yates III, Ph.D., and scientist Daniel McClatchy, Ph.D., in the Yates lab.

“The brain is a very complicated organ, and neurons are more complex than normal cells,” Sharma says. “We didn’t want to get lost in the complexity, so we decided on a reductionist approach to test what these vesicles are capable of and what they contain.”

They also injected healthy exosomes into a mouse hippocampus—a brain region involved in learning and memory—and observed increased neuron proliferation. This in vivo facet of the study proved that the exosome bioactivity seen in cell cultures carried over to an animal model.

Armed with their remarkable findings, Cline and her team now intend to dig deeper into their results and explore a slew of new questions related to exosome bioactivity and potential clinical applications: Could exosomes be measured in a blood test to detect disease or treatment efficacy? Do these findings also apply to autism spectrum disorders (ASDs) and other neurodevelopmental diseases, such as Fragile X? Could exosome-based therapies one day help patients with brain disorders?

“This research has huge relevance for many diseases related to brain development,” Cline says. “It’s very interesting biology that has a lot of scientists excited about the possibilities.”

Exosomes are thought to be released by all cells in the body and to be involved in intercellular communication. We tested whether neural exosomes can regulate the development of neural circuits. We show that exosome treatment increases proliferation in developing neural cultures and in vivo in dentate gyrus of P4 mouse brain. We compared the protein cargo and signaling bioactivity of exosomes released by hiPSC-derived neural cultures lacking MECP2, a model of the neurodevelopmental disorder Rett syndrome, with exosomes released by isogenic rescue control neural cultures. Quantitative proteomic analysis indicates that control exosomes contain multiple functional signaling networks known to be important for neuronal circuit development. Treating MECP2-knockdown human primary neural cultures with control exosomes rescues deficits in neuronal proliferation, differentiation, synaptogenesis, and synchronized firing, whereas exosomes from MECP2-deficient hiPSC neural cultures lack this capability. These data indicate that exosomes carry signaling information required to regulate neural circuit development.