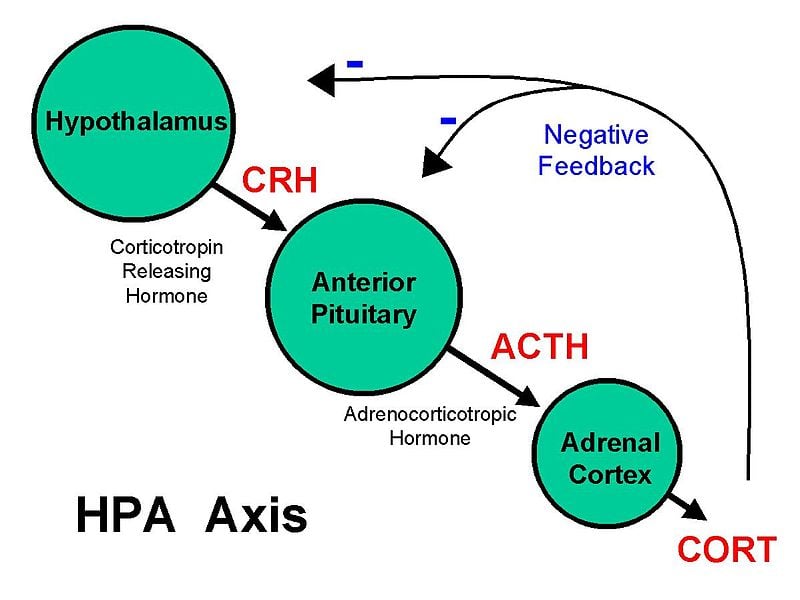 Researchers have shown that stress on preadolescent and adult male mice induced an epigenetic mark in their sperm that reprogrammed their offspring’s hypothalamic-pituitary-adrenal (HPA) axis, a region of the brain that governs responses to stress. The diagram shows the basic hypothalamic–pituitary–adrenal axis summary.
Home
Featured

Male and female offspring of stressed male mice had a reduced stress response, an underlying feature of several mental disorders.

Sperm doesn’t appear to forget anything. Stress felt by dad—whether as a preadolescent or adult—leaves a lasting impression on his sperm that gives sons and daughters a blunted reaction to stress, a response linked to several mental disorders. The findings, published in a new preclinical study in the Journal of Neuroscience by researchers at the University of Pennsylvania, point to a never-before-seen epigenetic link to stress-related diseases such as anxiety and depression passed from father to child.

While environmental challenges, like diet, drug abuse, and chronic stress, felt by mothers during pregnancy have been shown to affect offspring neurodevelopment and increase the risk for certain diseases, dad’s influence on his children are less well understood. The effects of lifelong exposures to dad on children are even more out of reach.

Now, a team of researchers led by Tracy L. Bale, PhD, associate professor of neuroscience in the Perelman School of Medicine Department of Psychiatry and the School of Veterinary Medicine Department of Animal Biology have shown that stress on preadolescent and adult male mice induced an epigenetic mark in their sperm that reprogrammed their offspring’s hypothalamic-pituitary-adrenal (HPA) axis, a region of the brain that governs responses to stress. Surprisingly, both male and female offspring had abnormally low reactivity to stress.

This stress pathway dysregulation—when reactivity is either heightened or reduced—is a sign that an organism doesn’t have the ability to respond appropriately to a changing environment. And as a result, their stress response becomes irregular, which can lead to stress-related disorders.

“It didn’t matter if dads were going through puberty or in adulthood when stressed before they mated. We’ve shown here for the first time that stress can produce long-term changes to sperm that reprogram the offspring HPA stress axis regulation,” said Bale. “These findings suggest one way in which paternal-stress exposure may be linked to such neuropsychiatric diseases.”

Past epidemiological studies suggest that germ cells—sperm and eggs—are more susceptible to reprogramming during the slow growth period of preadolescence. Therefore, in this study, in order to examine the effects of paternal stress, male mice were exposed to six weeks of chronic stress, before breeding, either throughout puberty or only in adulthood. Examples of stress include sudden move to another cage, predator oder (fox urine, for example), noise, or a foreign object in the cage.

Male mice are ideal for such an experiment because they do not participate in offspring rearing, meaning any external factors outside of germ-cell formation are essentially eliminated.

To understand the neural circuitry in the offspring, the group also examined changes in gene expression in certain brain regions involved in stress regulation: the paraventricular nucleus (PVN) and the bed nucleus of stria terminals. They found an increased expression of glucocorticoid-responsive genes in the PVN, a change that supports a possible mechanism whereby increased negative feedback sensitivity may be explained.

The researchers also looked at a series of microRNAs (miRs) in the sperm that uniquely contribute to post-fertilization gene expression to examine the epigenetic mechanisms of transmission to the next generation. In both groups of stressed dads, there was a significant increase in expression of nine miRs. These miRs may be targeting the stored maternal messenger RNAs in the egg at fertilization, so that dad’s sperm can regulate some aspect of early development to inform his offspring about the environment, according to the authors.

They also point out that a reduced physiological stress response may reflect some adaptive evolutionary benefit passed on to offspring to ensure survival in what is expected to be a more stressful environment.

Our Brains ‘Time-Stamp’ Sounds to Process the Words We Hear

“Whether such diminished stress reactivity would be detrimental or beneficial to offspring likely depends on the environment into which they were born, as well as genetic background factors,” they state in the paper. However, they conclude, the finding that mild stress experience across a lifespan can change in male germ cells provides an important and novel mechanism contributing to neuropsychiatric disease risk.

“Next, we are examining the mechanism whereby these sperm miRs act at fertilization, and then we can think about using them as biomarkers in human diseases,” said Bale. “And then we can begin to predict who has been exposed to what, and to think about prevention or treatment down the road.”

Notes about this neurodevelopment and epigenetics research

Co-authors of the study include Ali B. Rodgers, Christopher P. Morgan, Stefanie L. Bronson, and Sonia Revello, also of the Department of Animal Biology, School of Veterinary Medicine at Penn.