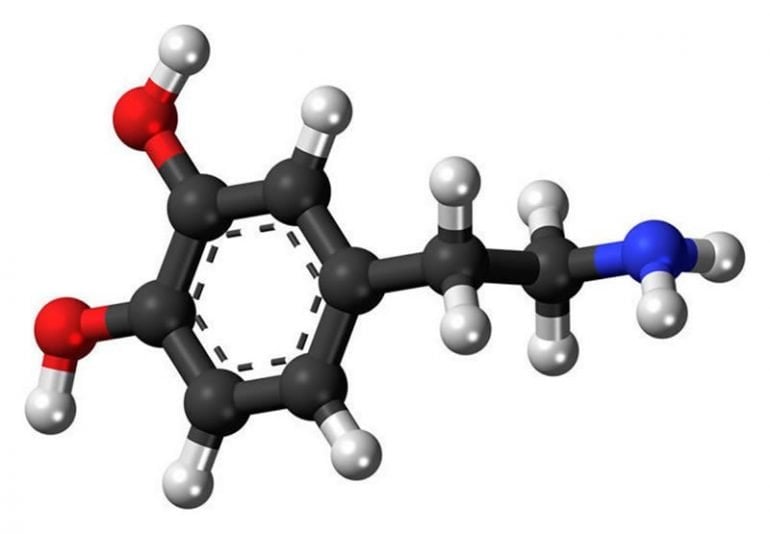 Dopamine, known as the feel-good neurotransmitter, is a chemical that ferries information between neurons. The image is in the public domain.

Scientists at the Icahn School of Medicine at Mount Sinai have discovered a new role for the brain chemical dopamine that is independent of classic neurotransmission. The new role appears to be critical to changes in gene expression related to chronic exposure to, or abuse of, cocaine, according to a study published Friday, April 10, in the journal Science.

“Our study provides the first evidence of how dopamine can directly impact drug-induced gene expression abnormalities and subsequent relapse behavior,” says Ian Maze, PhD, Associate Professor of Neuroscience, and Pharmacological Sciences, at the Icahn School of Medicine at Mount Sinai, and lead author of the study. “Beyond transmission of signals between neurons in the brain, we have found that dopamine can be chemically attached to histone proteins, which causes cells to switch different genes on and off, affecting regions of the brain that are involved in motivation and reward behavior. This biochemical process significantly affects cocaine vulnerability and relapse when perturbed by drugs of abuse.”

The study revolves around DNA and how it works to form each person’s individual biological map. Each cell in the body contains two meters of DNA, the blueprint for all functions of all cells in the body. This DNA is wound around spools of histone proteins (proteins that package DNA in the nucleus of cells, and are heavily prone to chemical modifications that aid in the regulation of gene expression) into structures referred to as nucleosomes. When DNA encoding a specific gene is wound tightly within the spool, that gene is less likely to be expressed. When the gene is not wound as tightly, it is more likely to be expressed. This can affect many functions of a given cell.

Dopamine, known as the feel-good neurotransmitter, is a chemical that ferries information between neurons. The brain releases it when we eat food that we crave or while we have sex, contributing to feelings of pleasure and satisfaction as part of the natural reward system. This important neurochemical boosts mood, motivation, and attention, and helps regulate movement, learning, and emotional responses. Dopamine also enables us not only to see rewards but to take action to move toward them.

Vulnerability to relapse during periods of cocaine withdrawal is believed to result from functional rewiring of the brain’s reward circuitry, particularly within mid-brain regions, such as the ventral tegmental area (VTA). The research team discovered that a protein called transglutaminase 2 can directly attach dopamine molecules to histone proteins (a process called histone dopaminylation or H3Q5dop) which, in turn, affects the histone-DNA spool to enable environmentally regulated alterations in gene expression. They found that histone dopaminylation plays a critical role in fueling heightened vulnerability to relapse over a prolonged period of time. Specifically, accumulation of H3Q5dop in the VTA can, in effect, hijack the reward circuitry, making it difficult to distinguish between good and maladaptive behavior. The study found, however, that reducing H3Q5dop in rats programmed to undergo withdrawal from cocaine significantly reversed cocaine-mediated gene expression changes and reduced cocaine-seeking behavior.

“The question that has always challenged neuroscientists is, what are the underlying molecular phenomena that drive increased vulnerability to drug relapse in people,” says Ashley Lepack, PhD, a researcher in the Department of Neuroscience, The Friedman Brain Institute, in Dr. Maze’s lab at Mount Sinai, and first author of the study. “Our research is shedding valuable light on this area by identifying histone dopaminylation as a new, neurotransmission-independent role for dopamine that hasn’t been implicated before in brain pathology.”

“We believe these findings represent a paradigm shift in how we think of dopamine, not just in the context of drug abuse, but also potentially in other reward-related behaviors and disorders, as well as in neurodegenerative diseases like Parkinson’s, where dopamine neurons are dying,” says Dr. Maze. “In this case, the question becomes, ‘could this neuronal death be due, in part, to aberrant dopaminylation of histone proteins?’ ”

In a study published last year, Dr. Maze and his team found that another neurotransmitter, serotonin, a chemical involved in the regulation of mood, acts in a similar way as dopamine on gene expression inside brain cells.

“When we observed this unique signaling mechanism with serotonin, we decided to look at other neurotransmitters, particularly dopamine, and found that it could also undergo this type of chemical modification on the same histone protein,” explains Dr. Maze.

Early-stage work with human post-mortem tissues has demonstrated to Dr. Maze that strong parallels may well exist, but that basic questions around biochemical function still remain before human trials can begin. “From a therapeutic standpoint, we’ve started to identify from rodent models the mechanisms that can actually reverse aberrant and addictive behaviors,” says Dr. Maze, “and that knowledge could be vital to moving this novel research into the clinic.”

Researchers from State University of New York at Buffalo, The Rockefeller University, McGill University, and Vanderbilt University School of Medicine contributed to this research.

Vulnerability to relapse during periods of attempted abstinence from cocaine use is hypothesized to result from the rewiring of brain reward circuitries, particularly ventral tegmental area (VTA) dopamine neurons. How cocaine exposures act on midbrain dopamine neurons to precipitate addiction-relevant changes in gene expression is unclear. We found that histone H3 glutamine 5 dopaminylation (H3Q5dop) plays a critical role in cocaine-induced transcriptional plasticity in the midbrain. Rats undergoing withdrawal from cocaine showed an accumulation of H3Q5dop in the VTA. By reducing H3Q5dop in the VTA during withdrawal, we reversed cocaine-mediated gene expression changes, attenuated dopamine release in the nucleus accumbens, and reduced cocaine-seeking behavior. These findings establish a neurotransmission-independent role for nuclear dopamine in relapse-related transcriptional plasticity in the VTA.

Feel Free To Share This Genetics and Addiction News.

New Insights on the Significance of Willpower to Self-Control