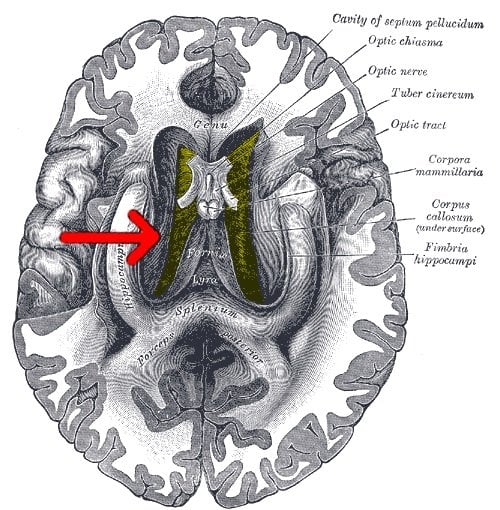 Researchers detected an overall reduced volume of the mid brain structures including the caudate and corpus callosum in those with low birth weight. These areas are involved in motor control, executive attention and connectivity. The image highlights the location of the corpus callosum in the brain.
Home
Featured

An analysis of recent data from magnetic resonance imaging (MRI) of 97 adolescents who were part of study begun with very low birth weight babies born in 1982-1986 in a Cleveland neonatal intensive care unit has tied smaller brain volumes to poor academic achievement.

More than half of the babies that weighed less than 1.66 pounds and more than 30 percent of those less than 3.31 pounds at birth later had academic deficits. (Less than 1.66 pounds is considered extremely low birth weight; less than 3.31 pounds is labeled very low birth weight.) Lower birth weight was associated to smaller brain volumes in some of these children, and smaller brain volume, in turn, was tied to academic deficits.

The research team — led by Caron A.C. Clark, a scientist in the Department of Psychology and Child and Family Center at the University of Oregon — detected an overall reduced volume of mid-brain structures, the caudate and corpus callosum, which are involved in connectivity, executive attention and motor control.

The findings, based a logistic regression analyses of the MRIs done approximately five years ago, were published in the May issue of the journal Neuropsychology. The longitudinal study originally was launched in the 1980s with a grant from the National Institute of Child Health and Human Development (National Institutes of Health, grant HD 26554) to H. Gerry Taylor of Case Western University, who was the senior author and principal investigator on the new paper.

“Our new study shows that pre-term births do not necessarily mean academic difficulties are ahead,” Clark said. “We had this group of children that did have academic difficulties, but there were a lot of kids in this data set who didn’t and, in fact, displayed the same trajectories as their normal birth-weight peers.”

Academic progress of the 201 original participants had been assessed early in their school years, again four years later and then annually until they were almost 17 years old. “We had the opportunity to explore this very rich data set,” Clark said. “There are very few studies that follow this population of children over time, where their trajectories of growth at school are tracked. We were interested in seeing how development unfolds over time.”

The findings, Clark added, provide new insights but also raise questions such as why some low-birth-weight babies develop normally and others do not? “It is very difficult to pick up which kids will need the most intensive interventions really early, which we know can be really important.”

The findings also provide a snapshot of children of very low birth weights who were born in NICU 30 years ago. Since then, technologies and care have improved, she said, meaning that underweight babies born prematurely today might have an advantage over those followed in the study. However, she added, improving NICUs also are allowing yet smaller babies to survive.

Clark now is exploring these findings for early warning clues that might help drive informed interventions. “Pre-term birth does mean that you are much more likely to experience brain abnormalities that seem to put you at risk for these outcomes,” she said. “They seem to be a pretty strong predictor of poor cognitive development as children age. We really need to find ways to prevent these brain abnormalities and subsequent academic difficulties in these kids who are born so small.”

Notes about this neurology and cognitive development research

Co-authors were Kimberly Andrews Espy, professor of psychology and vice president for research and innovation, and dean of the graduate school at the UO; Hua Fang of the University of Massachusetts Medical School; Pauline A. Filipek and Jenifer Juranek, both of the University of Texas Health Sciences Center at Houston; and Barbara Bangert, Maureen Hack and Taylor, all of Case Western Reserve University and University Hospitals Case Medical Center, in Cleveland.