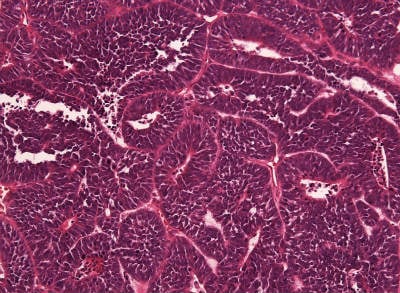 One step closer to understanding a deadly childhood brain cancer.

A new study by Canadian researchers may pave the way for more effective treatment of an aggressive and deadly type of brain tumour, known as ETMR/ETANTR. The tumour, which is seen only in children under four, is almost always fatal, despite aggressive treatment. The study proposes a new model for how this brain tumour develops and suggests possible targets to investigate for novel therapies. These findings, recently published in Nature Genetics, also shed new light on the complex process of early brain development. The study was led by the Research Institute of the McGill University Health Centre (RI-MUHC), the McGill University and Génome Québec Innovation Centre, and The Hospital for Sick Children (SickKids), and funded by the Cancer Research Society.

“We undertook this study because we wanted to learn what was driving the growth of these tumours and how best to treat them,” says the study’s co-principal investigator, Dr. Nada Jabado, hemato-oncologist at the Montreal Children’s Hospital of the MUHC and an associate professor in the Department of Pediatrics at McGill University. “This is a very aggressive disease with poor outcomes for patients; we urgently need better treatments for these kids, and this study, which helps us better understand what happens in this tumour, moves us a little closer to that target.”

“Our recent collaborations with Dr. Jabado’s and Dr. Majewski’s labs and other colleagues have provided opportunities to take our initial discovery of this entity closer to finding innovative treatments for this disease, which we believe is an important, yet under-recognized, infantile brain tumour, ” says co-principal investigator Dr. Annie Huang, a brain tumour specialist at SickKids and senior scientist in Cell Biology at SickKids Research Institute and associate professor of Pediatrics at the University of Toronto. In 2009, her group had made the initial discovery that several forms of deadly brain tumours in young children were in fact this single entity (ETMR/ETANTR), characterized by a unifying genetic marker.

For the study, the research team produced “genomic” profiles of the ETMR/ETANTR tumors, and also integrated and analyzed data from five massive publicly available data sets. Their analysis suggested that, in patients with ETMR/ETANTR, a developmental pathway – a process involved in the early formation of an organ in an embryo – is somehow “hijacked.” As a result, patients produce a specific form of an enzyme known as DNMT3B far later in development and in far greater quantities than normal.

“Genomic approaches are offering unprecedented opportunities to understand cancer,” explains co-principal investigator, Dr. Jacek Majewski, associate professor in the Department of Human Genetics at McGill University and a researcher at the McGill University and Génome Québec Innovation Centre. “In the past, researchers would meticulously follow individual genes and proteins to try to piece together what goes awry in a tumour. Today, we can rapidly look at the entire genome and, using computational analysis, identify the incorrectly produced genes – all with very little prior knowledge of the biology of the disease. In the case of the ETMR/ETANTR, within a few months we were able to go from tumour to a very promising target gene – DNMT3B.”

Abnormalities in DNMT3B have previously been linked to a range of cognitive problems. Forms of this enzyme are also seen in some leukemia and breast cancer types, and are often associated with poor outcomes. The research team found that, in patients with ETMR/ETANTR, the enzyme was present in huge quantities and at a stage of development when it should not be present at all. From a clinical point of view, the results of this study suggest DNMT3B may be a suitable target for future therapies designed to combat ETMR/ETANTR.

“We now want to see if we can control the production of the enzyme in the tumour, and if doing so enables us to stall its growth,” says Dr. Jabado who is also a researcher in Medical Genetics and Genomics at the RI-MUHC.

“This is a great example of how research can produce exciting and at times groundbreaking results, and we are thrilled to have contributed to this study that will hopefully help to save children’s lives, and hopefully get more studies of its kind off the ground,” states Andy Chabot, President and CEO of the Cancer Research Society.

Findings from this study will be added to a global tumour registry and ETMR/ETANTR tumour bank established by Dr. Huang, which has collected nearly 100 of these rare tumours to date. Although more research is needed, the prospects for developing an effective treatment are becoming steadily brighter as scientists learn more about ETMR/ETANTR. Importantly, these findings highlight how studying rare pediatric brain tumours can provide invaluable insight into unsuspected molecular mechanisms of brain development.

This work was supported by the Cancer Research Society.