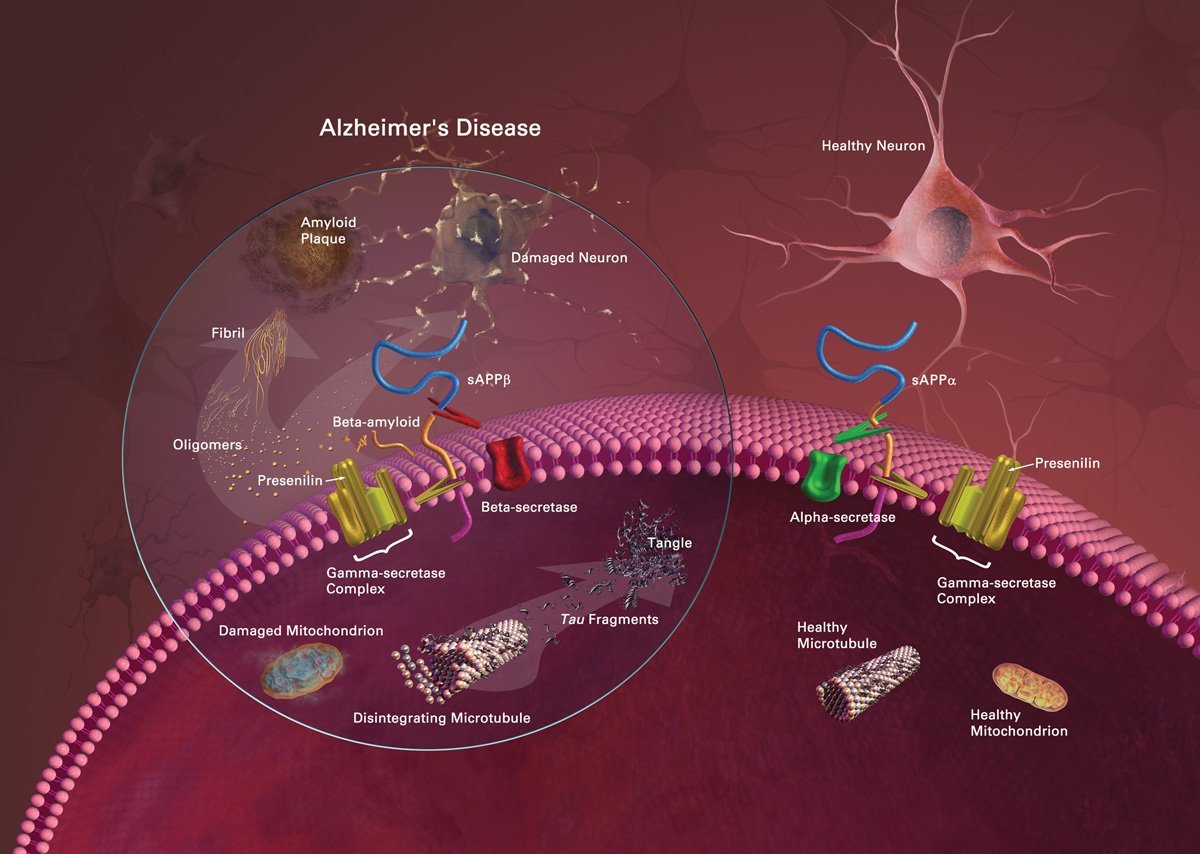 In a group of animals in which tiny implanted windows allowed direct imaging of brain tissue, the progression of A-beta plaque deposition was fastest in animals receiving APOE4 and slowest, sometimes even appearing to regress, in mice injected with APOE2. Signs of neuronal damage around plaques also varied depending on the APOE variant the animals received, and experiments in a different Alzheimer's model in which plaques appear more slowly showed that injection of APOE4 increased levels of free, soluble A-beta in the fluid that bathes the brain. This image compares neuronal damage in Alzheimer’s disease to healthy neurons, and is for illustrative purposes only. Credited to National Institute on Aging/NIH.
Home
Featured

Buphenyl Identified as a Possible Drug for Alzheimer’s Disease

Buphenyl, an FDA-approved medication for hyperammonemia, may protect memory and prevent the progression of Alzheimer’s disease. Hyperammonemia is a life-threatening condition that can affect patients at any age. It is caused by abnormal, high levels of ammonia in the blood.

Studies in mice with Alzheimer’s disease (AD) have shown that sodium phenylbutyrate, known as Buphenyl, successfully increases factors for neuronal growth and protects learning and memory, according to neurological researchers at the Rush University Medical Center.

Results from the National Institutes of Health funded study, recently were published in the Journal of Biological Chemistry.

“Understanding how the disease works is important to developing effective drugs that protect the brain and stop the progression of Alzheimer’s disease,” said Kalipada Pahan, PhD, the Floyd A. Davis professor of neurology at Rush and lead investigator of this study.

A family of proteins known as neurotrophic factors help in survival and function of neurons. Past research indicates that these proteins are drastically decreased in the brain of patients with Alzheimer’s disease (AD).

“Our study found that after oral feeding, Buphenyl enters into the brain, increases these beneficial proteins in the brain, protects neurons, and improves memory and learning in mice with AD-like pathology,” said Pahan.

In the brain of a patient with AD, two abnormal structures called plaques and tangles are prime suspects in damaging and killing nerve cells. While neurons die, other brain cells like astroglia do not die.

Other researchers involved in this study are Grant Corbett, neuroscience graduate student at Rush and Avik Roy, research assistant professor at Rush.