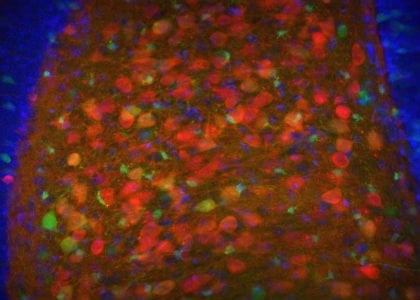 The image is credited to the NIH.

How information is processed and encoded in the brain is a central question in neuroscience, as it is essential for high cognitive function such as learning and memory. Theta-gamma oscillations are “brain waves” observed in the hippocampus of behaving rats, a brain region involved in learning and memory. In rodents, theta-gamma oscillations are associated with information processing during exploration and spatial navigation. However, the underlying synaptic mechanisms have so far remained unclear.

In research published this week in the journal Neuron, postdoc Alejandro Pernía-Andrade and Professor Peter Jonas, both at the Institute of Science and Technology Austria (IST Austria), discovered the synaptic mechanisms underlying oscillations at the dentate gyrus (main entrance of the hippocampus).

Furthermore, the researchers suggest a role for these oscillations in the coding of information by the dentate gyrus principal neurons.

Thus, these findings contribute to a better understanding of how information is processed in the brain.

Brain oscillations are, in fact, rhythmic changes in voltage in the extracellular space, referred to as electrical brain signals associated with the processing of information. These electrical signals are similar to those seen in electro-encephalographic recordings (EEG) in humans. Pernía-Andrade and Jonas observed these oscillations in a brain region called the hippocampus in behaving rats, and recorded oscillations occurring in this area using extracellular probes.

To understand how oscillations are generated and which synaptic events trigger these oscillations, the researchers looked at synaptic transmission in granule cells (principal cells at the main entrance of the hippocampus) from both the extracellular (oscillations) and the intracellular perspectives (synaptic currents and neuronal firing), and then correlated the two.

The precise, high-resolution recording from granule cells necessary for these discoveries was possible only through technological innovations by Pernía-Andrade and Jonas, as previously no equipment was available to record synaptic signals in active rats in such high resolution. They are the result of a collaboration with the Miba machine shop, IST Austria’s electrical and mechanical SSU (Scientific Service Unit).

Adapting commercially available equipment and custom-designing tools, Pernía-Andrade, Jonas and Todor Asenov, manager of the Miba machine shop, produced the first tools for precise biophysical analysis in active rats. This research is therefore not only a scientific advance but also represents a significant technological and conceptual progress in the quest to understand neuronal behavior under natural conditions.