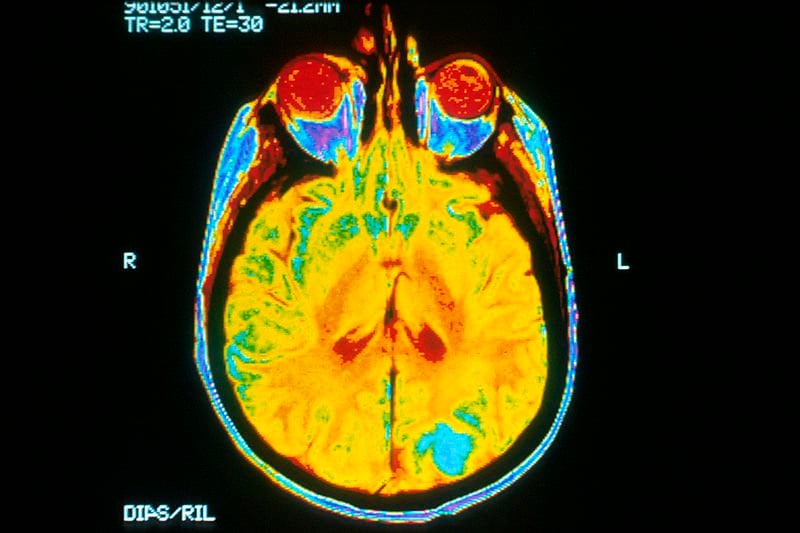 Gliomas are brain tumors that originate from glial cells, which provide support for nerve cells and help regulate the internal environment of the brain. ATM, or ataxia telangiectasia mutated, is an enzyme that helps repair DNA damage. The image is an MRI scan of a patient with brain cancer. The bright blue color is where brain cancer metastasizes in the occipital lobe.
Home
Brain Cancer

A novel drug may help increase the effectiveness of radiation therapy for the most deadly form of brain cancer, report scientists at Virginia Commonwealth University Massey Cancer Center. In mouse models of human glioblastoma multiforme (GBM), the new drug helped significantly extend survival when used in combination with radiation therapy.

Recently published in the journal Clinical Cancer Research, the study provides the first preclinical evidence demonstrating that an ATM kinase inhibitor radiosensitizes gliomas. Gliomas are brain tumors that originate from glial cells, which provide support for nerve cells and help regulate the internal environment of the brain. ATM, or ataxia telangiectasia mutated, is an enzyme that helps repair DNA damage. The scientists used an experimental drug, KU-60019, to block the activation of ATM, which led to the enhanced destruction of the gliomas due to their reduced ability to repair the DNA damage caused by the radiation treatment. The new approach was particularly effective against gliomas that have a mutation in the p53 tumor suppressor gene, which accounts for approximately 30 percent of all glioma cases.

“Sadly, the average life expectancy of patients diagnosed with glioblastoma is just 12 to 15 months,” says the study’s lead researcher Kristoffer Valerie, Ph.D., co-leader of the Radiation Biology and Oncology research program and a professor in the Department of Radiation Oncology at VCU Massey Cancer Center. “By limiting the tumor’s ability to combat DNA damage caused by treatments such as radiation, we are hopeful that we can enhance our ability to specifically target the glioma, prolong survival and reduce damage to surrounding brain tissue.”

Currently, GBM is treated with surgery, followed by chemotherapy and radiation therapy. Potentially, ATM kinase inhibitors like the one used in this study could enhance the effectiveness of some other cancer treatments that kill tumor cells by damaging DNA. The scientists chose radiation therapy in this study since it is already standard care and can be delivered to brain tumors with extreme accuracy, minimizing damage to surrounding healthy tissue.

“If these findings hold up in early phase clinical trials, we expect patients with p53 mutant gliomas to respond well to this treatment while showing few side effects. Also, we anticipate that this same treatment strategy could be effective for other cancers that are treated with DNA-damaging chemotherapies,” says Valerie. “We are encouraged by these early findings and will continue to move forward with our research. However, more studies are needed before we can proceed with testing this new therapy in humans.”

This first, ‘proof-of-principle’ study is an important follow-up of a study published several years ago on KU-60019 by Valerie and his research team that demonstrated KU-60019’s superior efficacy, specificity and potency on glioma cells as compared to a predecessor ATM inhibitor.