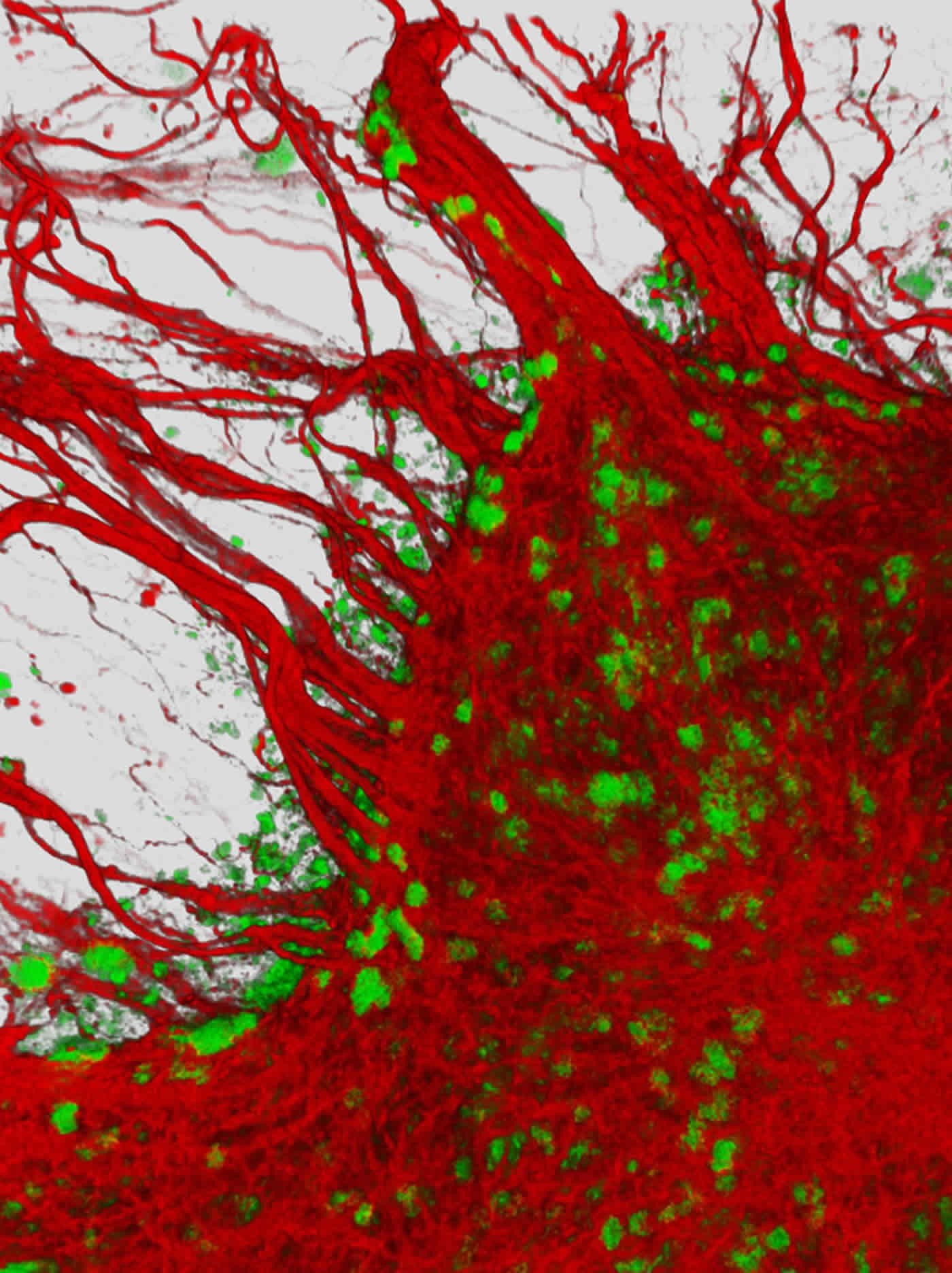 This is a 3-D image of human neurons in a dish. Image credit: Steve Moore, Livesey group, Gurdon Institute, University of Cambridge.

Researchers have found that the proteins that control the progression of Alzheimer’s are linked in a pathway, and that drugs targeting this pathway may be a way of treating the disease, which affects 40 million people worldwide. The findings are published today (23 April) in the journal Cell Reports.

The scientists, from the University of Cambridge, found that as a protein called amyloid precursor protein (APP) is broken down into toxic protein fragments called amyloid-beta, it affects changes in the way that another key protein, tau, behaves. Though links between these proteins have been described in earlier work, this research has identified a new association between them, and found that manipulating the rate at which APP is broken down is directly connected to levels of tau.

While it is not known exactly what causes Alzheimer’s, it is known that amyloid-beta and tau build up in the brain, forming ‘plaques’ and ‘tangles’ which disrupt the connections between neurons, eventually killing them. There are no treatments to stop or reverse the progression of the disease, although researchers are starting to understand the mechanisms which cause it to progress.

Most people who develop Alzheimer’s will first start showing symptoms in later life, typically in their sixties or seventies. However, between one and five percent of individuals with Alzheimer’s have a genetic version of the disease which is passed down through families, with onset typically occurring in their thirties or forties.

The Cambridge researchers used skin cells from individuals with the genetic form of Alzheimer’s and reprogrammed them to become induced pluripotent stem cells, which can become almost any type of cells in the body. The stem cells were then directed to become neurons with all the characteristics of Alzheimer’s.

Working with these clusters of human neurons – in essence, ‘mini brains’ – the researchers used three classes of drugs to manipulate the rate at which APP is ‘chewed up’ by inhibiting the secretase enzymes which are responsible for breaking it into amyloid-beta fragments. By using drugs to increase or decrease the rate at which APP is broken down, they observed that levels of tau can be altered as well.

Earlier research looking into the link between amyloid-beta and tau had found that once the APP gets broken down, a chunk of amyloid-beta gets outside the cell, which triggers increased production of tau. “What we’re seeing is that there’s a second pathway, and that the amyloid-beta doesn’t have to be outside the cell to change levels of tau – in essence, the cell does it to itself,” said Dr Rick Livesey of the Wellcome Trust/Cancer Research UK Gurdon Institute, who led the research.

Dr Simon Ridley, Head of Research at Alzheimer’s Research UK, said: “We are pleased to see that our investment in this innovative research using stem cell technology is boosting our understanding of Alzheimer’s disease mechanisms. Alzheimer’s Research UK is committed to funding pioneering research and through our Stem Cell Research Centre at the University of Cambridge we hope to unpick the molecular changes that cause dementia, and crucially, to test new drugs that halt disease progression. With 850,000 people living with dementia in this country, investment in research to find new treatments is critical.”

The research also points to the growing importance of human stem cells in medical research. “The question is why hasn’t this pathway been identified, given that Alzheimer’s is so well-studied?” said Livesey. “The answer is that mice don’t develop Alzheimer’s disease, and they don’t respond to these drugs the way human neurons do. It’s something we can only do by looking at real human neurons.”

Funding: The research was funded by Alzheimer’s Research UK and the Wellcome Trust.

Summary
Accumulation of Aβ peptide fragments of the APP protein and neurofibrillary tangles of the microtubule-associated protein tau are the cellular hallmarks of Alzheimer’s disease (AD). To investigate the relationship between APP metabolism and tau protein levels and phosphorylation, we studied human-stem-cell-derived forebrain neurons with genetic forms of AD, all of which increase the release of pathogenic Aβ peptides. We identified marked increases in intracellular tau in genetic forms of AD that either mutated APP or increased its dosage, suggesting that APP metabolism is coupled to changes in tau proteostasis. Manipulating APP metabolism by β-secretase and γ-secretase inhibition, as well as γ-secretase modulation, results in specific increases and decreases in tau protein levels. These data demonstrate that APP metabolism regulates tau proteostasis and suggest that the relationship between APP processing and tau is not mediated solely through extracellular Aβ signaling to neurons.

Feel free to share this article with another neuroscience fan.