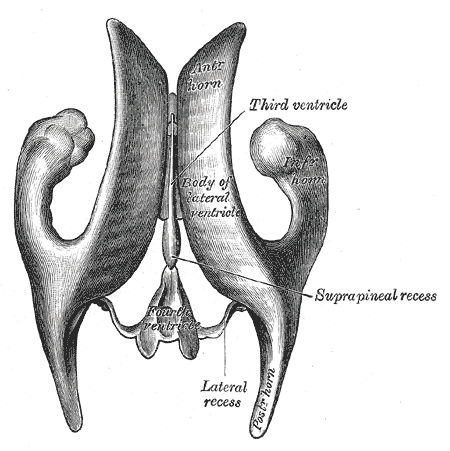 A new study found that low-birth-weight newborns were seven times more likely to be diagnosed with autism later in life if an ultrasound taken just after birth showed they had enlarged ventricles. The brain ventricle diagram is credited to Gray's Anatomy.
Home
Autism

Low-birth-weight babies with a particular brain abnormality are at greater risk for autism, according to a new study that could provide doctors a signpost for early detection of the still poorly understood disorder.

Led by Michigan State University, the study found that low-birth-weight newborns were seven times more likely to be diagnosed with autism later in life if an ultrasound taken just after birth showed they had enlarged ventricles, cavities in the brain that store spinal fluid. The results appear in the Journal of Pediatrics.

“For many years there’s been a lot of controversy about whether vaccinations or environmental factors influence the development of autism, and there’s always the question of at what age a child begins to develop the disorder,” said lead author Tammy Movsas, clinical assistant professor of pediatrics at MSU and medical director of the Midland County Department of Public Health.

“What this study shows us is that an ultrasound scan within the first few days of life may already be able to detect brain abnormalities that indicate a higher risk of developing autism.”

Movsas and colleagues reached that conclusion by analyzing data from a cohort of 1,105 low-birth-weight infants born in the mid-1980s. The babies had cranial ultrasounds just after birth so the researchers could look for relationships between brain abnormalities in infancy and health disorders that showed up later. Participants also were screened for autism when they were 16 years old, and a subset of them had a more rigorous test at 21, which turned up 14 positive diagnoses.

Ventricular enlargement is found more often in premature babies and may indicate loss of a type of brain tissue called white matter.

“This study suggests further research is needed to better understand what it is about loss of white matter that interferes with the neurological processes that determine autism,” said co-author Nigel Paneth, an MSU epidemiologist who helped organize the cohort. “This is an important clue to the underlying brain issues in autism.”

Prior studies have shown an increased rate of autism in low-birth-weight and premature babies, and earlier research by Movsas and Paneth found a modest increase in symptoms among autistic children born early or late.

The Neural Pathways for Vomiting After Eating Infected Food

The study was supported by a grant from the National Institutes of Health.