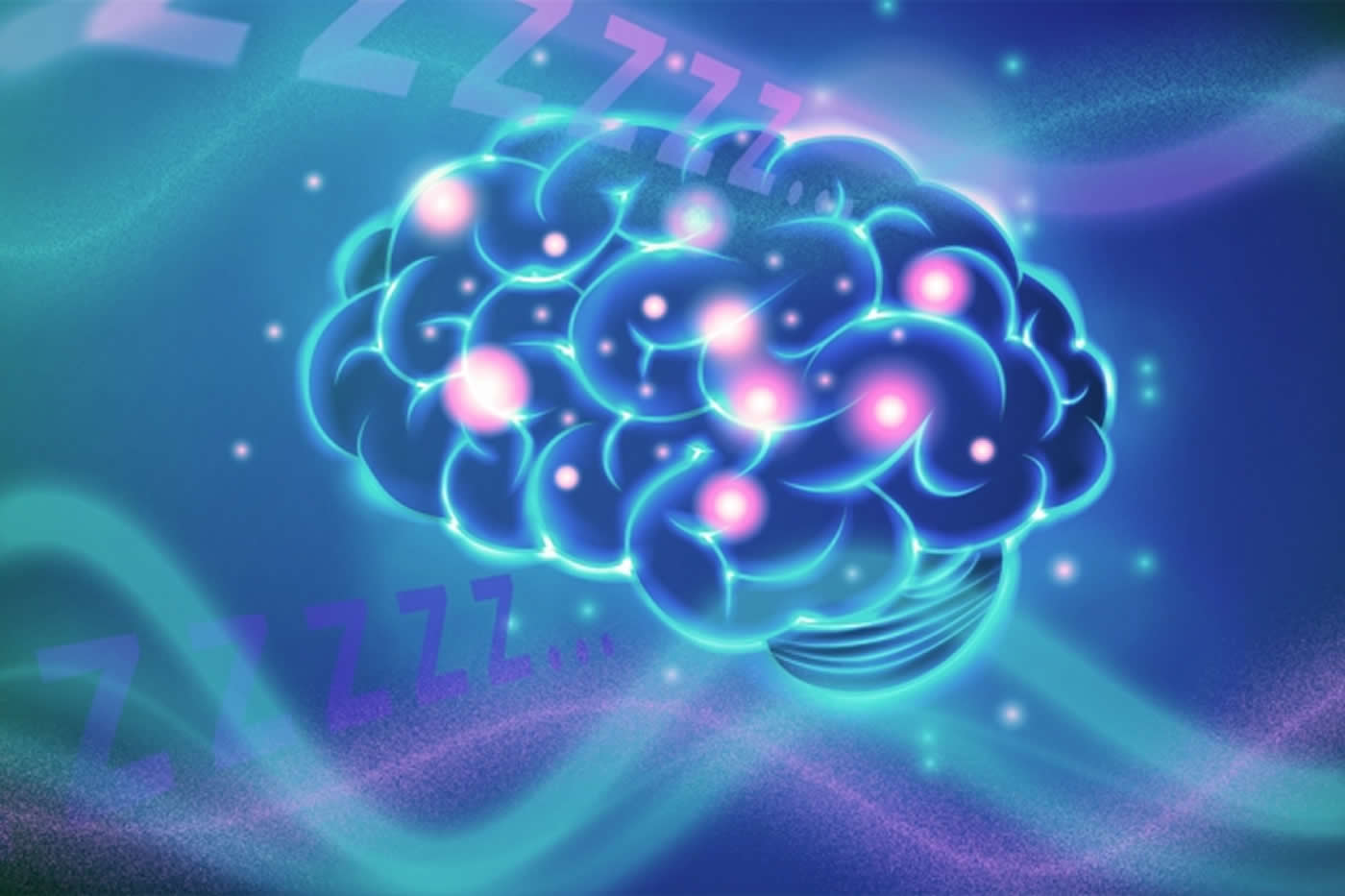 Using optogenetics, a technique that allows scientists to stimulate or silence neurons with light, the researchers found that if they weakly stimulated the TRN in awake mice, slow waves appeared in a small part of the cortex. With more stimulation, the entire cortex showed slow waves. Credit: Jose-Luis Olivares/MIT.

How the Brain Controls Sleep

Brain structure generates pockets of sleep within the brain.

Sleep is usually considered an all-or-nothing state: The brain is either entirely awake or entirely asleep. However, MIT neuroscientists have discovered a brain circuit that can trigger small regions of the brain to fall asleep or become less alert, while the rest of the brain remains awake.

This circuit originates in a brain structure known as the thalamic reticular nucleus (TRN), which relays signals to the thalamus and then the brain’s cortex, inducing pockets of the slow, oscillating brain waves characteristic of deep sleep. Slow oscillations also occur during coma and general anesthesia, and are associated with decreased arousal. With enough TRN activity, these waves can take over the entire brain.

The researchers believe the TRN may help the brain consolidate new memories by coordinating slow waves between different parts of the brain, allowing them to share information more easily.

“During sleep, maybe specific brain regions have slow waves at the same time because they need to exchange information with each other, whereas other ones don’t,” says Laura Lewis, a research affiliate in MIT’s Department of Brain and Cognitive Sciences and one of the lead authors of the new study, which appears today in the journal eLife.

The TRN may also be responsible for what happens in the brain when sleep-deprived people experience brief sensations of “zoning out” while struggling to stay awake, the researchers say.

The paper’s other first author is Jakob Voigts, an MIT graduate student in brain and cognitive sciences. Senior authors are Emery Brown, the Edward Hood Taplin Professor of Medical Engineering and Computational Neuroscience at MIT and an anesthesiologist at Massachusetts General Hospital, and Michael Halassa, an assistant professor at New York University. Other authors are MIT research affiliate Francisco Flores and Matthew Wilson, the Sherman Fairchild Professor in Neurobiology and a member of MIT’s Picower Institute for Learning and Memory.

Until now, most sleep research has focused on global control of sleep, which occurs when the entire brain is awash in slow waves — oscillations of brain activity created when sets of neurons are silenced for brief periods.
However, recent studies have shown that sleep-deprived animals can exhibit slow waves in parts of their brain while they are still awake, suggesting that the brain can also control alertness at a local level.

The MIT team began its investigation of local control of alertness or drowsiness with the TRN because its physical location makes it perfectly positioned to play a role in sleep, Lewis says. The TRN surrounds the thalamus like a shell and can act as a gatekeeper for sensory information entering the thalamus, which then sends information to the cortex for further processing.

Using optogenetics, a technique that allows scientists to stimulate or silence neurons with light, the researchers found that if they weakly stimulated the TRN in awake mice, slow waves appeared in a small part of the cortex. With more stimulation, the entire cortex showed slow waves.

“We also found that when you induce these slow waves across the cortex, animals start to behaviorally act like they’re drowsy. They’ll stop moving around, their muscle tone will go down,” Lewis says.

The researchers believe the TRN fine-tunes the brain’s control over local brain regions, enhancing or reducing slow waves in certain regions so those areas can communicate with each other, or inducing some areas to become less alert when the brain is very drowsy. This may explain what happens in humans when they are sleep-deprived and momentarily zone out without really falling asleep.

“I’m inclined to think that happens because the brain begins to transition into sleep, and some local brain regions become drowsy even if you force yourself to stay awake,” Lewis says.

“The strength of this paper is that it’s the first to use optogenetics to try to dissect the role of part of the thalamo-cortical circuitry in generating slow waves in the cortex,” says Mark Opp, a professor of anesthesiology and pain medicine at the University of Washington who was not part of the research team.

Understanding how the brain controls arousal could help researchers design new sleep and anesthetic drugs that create a state more similar to natural sleep. Stimulating the TRN can induce deep, non-REM-like sleep states, and previous research by Brown and colleagues uncovered a circuit that turns on REM sleep.

Brown adds, “The TRN is rich in synapses — connections in the brain — that release the inhibitory neurotransmitter GABA. Therefore, the TRN is almost certainly a site of action of many anesthetic drugs, given that a large classes of them act at these synapses and produce slow waves as one of their characteristic features.”

Previous work by Lewis and colleagues has shown that unlike the slow waves of sleep, the slow waves under general anesthesia are not coordinated, suggesting a mechanism for why these drugs impair information exchange in the brain and produce unconsciousness.

About this sleep and neuroscience research