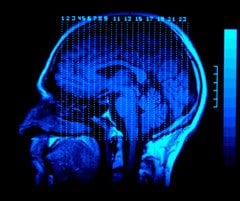 Taking neuropsychological and cognitive tests over the course of three months, results within the mTBI group varied considerably, with some patients performing as well as the healthy controls throughout, while others showed impairment initially that resolved by three months, and a third group with cognitive dysfunction persisting through three months. The nine patients who had abnormally high levels of SNTF (7 mTBI and 2 orthopaedic patients) also had significant white matter damage apparent in radiological imaging. This image is for illustrative purposes only and is not connected to the research.
Home
Featured

From Trauma to Tau

University of Texas Medical Branch at Galveston researchers have uncovered what may be a key molecular mechanism behind the lasting damage done by traumatic brain injury.

The discovery centers on a particular form of a protein that neuroscientists call tau, which has also been associated with Alzheimer’s disease and other neurodegenerative conditions. Under ordinary conditions, tau is essential to neuron health, but in Alzheimer’s the protein aggregates into two abnormal forms: so-called “neurofibrillary tangles,” and collections of two, three, or four or more tau units known as “oligomers.”

Neurofibrillary tangles are not believed to be harmful, but tau oligomers are toxic to nerve cells. They also are thought to have an additional damaging property — when they come into contact with healthy tau proteins, they cause them to also clump together into oligomers, and so spread toxic tau oligomers to other parts of the brain.

Now, in experiments with laboratory rats, using novel antibodies developed at UTMB, scientists have found that traumatic brain injuries also generate tau oligomers. The destructive protein assemblages formed within four hours after injury and persisted for at least two weeks — long enough to suggest that they might contribute to lasting brain damage.

Significantly, the rats used in the experiments were normal, unlike the genetically modified animals used in most tau research. The findings are thus likely to be more relevant to human traumatic brain injuries.

“Although people have given some attention to the formation of neurofibrillary tangles after traumatic brain injury, we were the first to look at tau oligomers, because we have an antibody that allows us to separate them out and see how much of the total tau is the toxic species,” said Bridget Hawkins, lead author of a paper on the research now online in the Journal of Biological Chemistry. “We saw that it’s a substantial amount — enough to play an important role in the effects of traumatic brain injury.”

Those effects can include memory deficits, which have been recently shown by UTMB researchers to be induced by tau oligomers. Other long-term ramifications of TBI include seizures, and disruptions in the sleep-wake cycle. The UTMB scientists hypothesize that these problems could be avoided if physicians had a way to stop the process of tau oligomerization.

One possibility is a treatment based on the antibodies used to label tau oligomers in this project, which were developed as part of an effort to develop a vaccine against different neurodegenerative disorders.

“We have antibodies that can specifically target these tau oligomers without interfering with the function of healthy tau,” said UTMB associate professor Rakez Kayed, the senior author on the paper. “This is a new approach — we’re starting by targeting them in animals — but we hope to eventually humanize these antibodies for clinical trials.”

Notes about this TBI and neurochemistry research

Other authors of the paper include research associates Shashirekha Krishnamurthy and Urmi Sengupta, postdoctoral fellow Diana Castillo-Carranza, Dr. Donald Prough, Dr. George Jackson and Dr. Douglas DeWitt. Support for this research was provided by the Cullen Family Trust for Health Care, the Mitchell Center for Neurodegenerative Diseases and the Moody Center for Traumatic Brain and Spinal Cord Injury Research/Mission Connect.