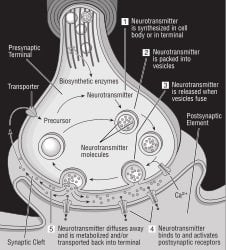 Carnegie Mellon neuroscientists have discovered a new intermediate phase in neuronal development during which repeated exposure to a stimulus shrinks synapses.
Home
Featured

Students preparing for final exams might want to wait before pulling an all-night cram session — at least as far as their neurons are concerned. Carnegie Mellon University neuroscientists have discovered a new intermediate phase in neuronal development during which repeated exposure to a stimulus shrinks synapses. The findings are published in the May 8 issue of the Journal of Neuroscience.

It’s well known that synapses in the brain, the connections between neurons and other cells that allow for the transmission of information, grow when they’re exposed to a stimulus. New research from the lab of Carnegie Mellon Associate Professor of Biological Sciences Alison L. Barth has shown that in the short term, synapses get even stronger than previously thought, but then quickly go through a transitional phase where they weaken.

“When you think of learning, you think that it’s cumulative. We thought that synapses started small and then got bigger and bigger. This isn’t the case,” said Barth, who also is a member of the joint Carnegie Mellon/University of Pittsburgh Center for the Neural Basis of Cognition. “Based on our data, it seems like synapses that have recently been strengthened are peculiarly vulnerable — more stimulation can actually wipe out the effects of learning.

“Psychologists know that for long-lasting memory, spaced training – like studying for your classes after very lecture, all semester long — is superior to cramming all night before the exam,” Barth said. “This study shows why. Right after plasticity, synapses are almost fragile — more training during this labile phases is actually counterproductive.”

Previous research from Barth’s lab established the biochemical mechanisms responsible for the strengthening of synapses in the neocortex, the part of the brain responsible for thought and language, but only measured the synapses after 24 hours. In the current study, post-doctoral student Jing A. Wen investigated how the synapses developed throughout the first 24 hours of exposure to a stimulus using a specialized transgenic mouse model created by Barth. The model senses its surroundings using only one whisker, which alters its ability to sense its environment and creates a sensory imbalance that increases plasticity in the brain. Since each whisker is linked to a specific area of the cortex, researchers can easily track neuronal changes.

Wen found that during this first day of learning, synapses go through three distinct phases. In the initiation phase, synaptic plasticity is spurred on by NMDA receptors. Over the next 12 hours or so, the synapses get stronger and stronger. As the stimulus is repeated, the NDMA receptors change their function and start to weaken the synapses in what the researchers have called the labile phase. After a few hours of weakening, another receptor, mGluR5, initiates a stabilization phase during which the synapses maintain their residual strength.

Furthermore, the researchers found that they could maintain the super-activated state found at the beginning of the labile phase by stopping the stimulus altogether or by injecting a glutamate receptor antagonist drug at an optimal time point. The findings are analogous to those seen in many psychological studies that use space training to improve memory.

“While synaptic changes can be long lasting, we’ve found that in this initial period there are a number of different things we could play with,” Barth said. “The discovery of this labile phase suggests there are ways to control learning through the manipulation of the biochemical pathways that maintain memory.”

Notes about this synaptic development and neuroplasticity research

The research was funded by the National Institutes of Health (DA-0171-88).