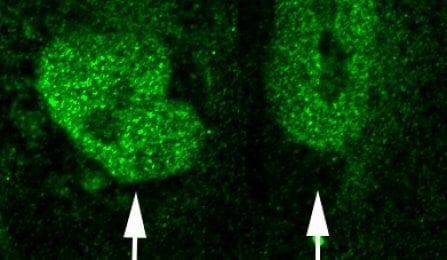 New University at Buffalo research demonstrates how defects in an important neurological pathway in early development may be responsible for the onset of schizophrenia later in life.

The UB findings, published in Schizophrenia Research, test the hypothesis in a new mouse model of schizophrenia that demonstrates how gestational brain changes cause behavioral problems later in life,  just like the human disease.

The genomic pathway, called the Integrative Nuclear FGFR 1 Signaling (INFS), is a central intersection point for multiple pathways of as many as 160 different genes believed to be involved in the disorder.

“We believe this is the first model that explains schizophrenia from genes to development to brain structure and finally to behavior,” says lead author Michal Stachowiak, PhD, professor in the Department of Pathology and Anatomical Sciences in the UB School of Medicine and Biomedical Sciences. He also is director of the Stem Cell Engraftment & In Vivo Analysis Facility at the Western New York Stem Cell Culture and Analysis Center at UB.

A key challenge with the disease is that patients with schizophrenia exhibit mutations in different genes, he says.

“How is it possible to have 100 patients with schizophrenia and each one has a different genetic mutation that causes the disorder?” asks Stachowiak. “It’s possible because INFS integrates diverse neurological signals that control the development of embryonic stem cell and neural progenitor cells, and links pathways involving schizophrenia-linked genes.

“INFS functions like the conductor of an orchestra,” explains Stachowiak. “It doesn’t matter which musician is playing the wrong note, it brings down the conductor and the whole orchestra. With INFS, we propose that when there is an alteration or mutation in a single schizophrenia-linked gene, the INFS system that controls development of the whole brain becomes untuned. That’s how schizophrenia develops.”

Using embryonic stem cells, Stachowiak and colleagues at UB and other institutions found that some of the genes implicated in schizophrenia bind the FGFR1 (fibroblast growth factor receptor) protein, which in turn, has a cascading effect on the entire INFS.

“We believe that FGFR1 is the conductor that physically interacts with all genes that affect schizophrenia,” he says. “We think that schizophrenia occurs when there is a malfunction in the transition from stem cell to neuron, particularly with dopamine neurons.”

The researchers tested their hypothesis by creating an FGFR1 mutation in mice, which produced the hallmarks of the human disease: altered brain anatomy, behavioral impacts and overloaded sensory processes.

“By attacking the INFS pathway, we were able to produce schizophrenia in mice,” he says.

He adds that if such a generalized genomic pathway is causing the disease, then it should be possible to treat the disease with a more generalized approach. “We may even be able to devise ways to arrest development of the disease before it presents fully in adolescence or adulthood,” he says.

The UB work adds to existing evidence that nicotinic agonists, often prescribed as smoking cessation drugs, could help improve cognitive function in schizophrenics by acting on the INFS. Schizophrenics smoke at a dramatically higher rate than the general population, long believed to be a form of self-medication.

Notes about this stem cell and schizophrenia research

In addition to NYSTEM, funding for the research was provided by UB and the March of Dimes and Birth Defects.

UB co-authors with Stachowiak are: his graduate students, S. Narla, D. Prokop, C. Syposs, C. Terranova, A. Kucinski and R. Curl; research assistant professors B. Birkaya, PhD, E. K. Stachowiak, PhD, all in the Department of Pathology and Anatomical Sciences; S. Wersinger, PhD, assistant professor, and Y. Yang of the Department of Psychology; A. Parikh, doctoral candidate and E.S. Tzanakakis, PhD, associate professor of the Department of Chemical and Biological Engineering in the School of Engineering and Applied Sciences and the Western New York Stem Cell Culture and Analysis Center at UB.

Other co-authors are I. Klejbor of Gdansk Medical University, M. Bencherif of Targacept Inc. and T. Corso of Lake Erie College of Osteopathic Medicine.