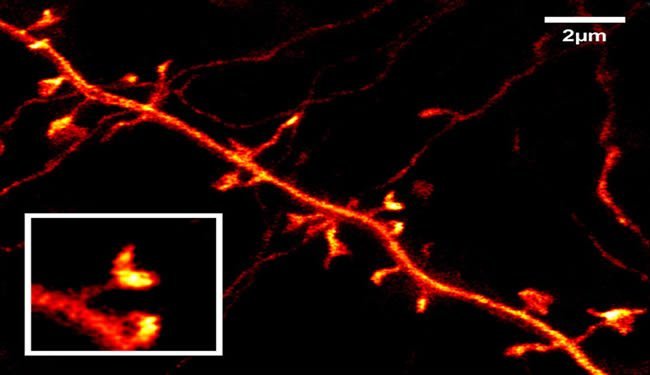 Max Planck scientists in Göttingen have for the first time made finest details of nerve cells in the brain of a living mouse visible.

To explore the most intricate structures of the brain in order to decipher how it functions – Stefan Hell’s team of researchers at the Max Planck Institute for Biophysical Chemistry in Göttingen has made a significant step closer to this goal.

Using the STED microscopy developed by Hell, the scientists have, for the first time, managed to record detailed live images inside the brain of a living mouse. Captured in the previously impossible resolution of less than 70 nanometers, these images have made the minute structures visible which allow nerve cells to communicate with each other. This application of STED microscopy opens up numerous new possibilities for neuroscientists to decode fundamental processes in the brain.

Every day a huge quantity of information travels not only over our information superhighways; our brain must process an enormous amount of data as well. In order to do this, each of the approximately hundred billion nerve cells establishes contact with thousands of neighboring nerve cells. The entire data exchange takes place via contact sites – the synapses. Only if the nerve cells communicate via such contact sites at the right time and at the right place can the brain master its complex tasks: We play a difficult piece of piano, learn to juggle, or remember the names of people we have not seen for years.

We can learn most about these important contact sites in the brain by observing them at work. When and where do new synapses form and why do they disappear elsewhere? This is not easy to determine, since details in living nerve cells can only be observed with optical microscopes. Due to the diffraction of light, however, structures located closer together than 200 nanometers (200 millionths of a millimeter) appear as a single blurred spot.

The STED microscopy developed by Stefan Hell and his team at the Max Planck Institute for Biophysical Chemistry is a groundbreaking method devised to surpass this resolution limit. They use a simple trick: Closely-positioned elements are kept dark under a special laser beam so that they emit fluorescence sequentially one after the other, rather than simultaneously, and can therefore be distinguished. Using this technique, Hell’s team has been able to increase the resolution by approximately tenfold compared to conventional optical microscopes.

STED microscopy has already found wide application in fields ranging from materials research to cell biology. Under this microscope, cell cultures and histological preparations have offered unique insights into the cellular nanocosmos. The first real-time video clips from the interior of a nerve cell have demonstrated how tiny transmitter vesicles migrate within the long nerve cell endings.

httpv://www.youtube.com/watch?v=hzrf-9vjGH4
Using the STED microscope to glance into region of 10-15 micrometres under the surface of the brain, scientists can observe how the two dentritic spines change their shape in a 30-minute time period. Neuroscience video from MaxPlanckSociety user on YouTube.com.

What was only an ambitious vision a year ago has now become reality: to also study higher living organisms at this sharp resolution in the nanometer range. By looking directly into the brains of living mice using a STED microscope, Hell and his team were the first ones to image nerve cells in the upper brain layer of the rodent with resolution far beyond the diffraction limit.

“With our STED microscope we can clearly see the very fine dendritic structures of nerve cells at which the synapses are located in the brain of a living mouse. At a resolution of 70 nanometers, we easily recognize these so-called dendritic spines with their mushroom- or button-shaped heads,” explains Hell. They are the clearest images of these fundamental contact sites in the brain to date. “To make these visible, we take genetically modified mice that produce large quantities of a yellow fluorescing protein in their nerve cells. This protein migrates into all the branches of the nerve cell, even into smallest, finest structures,” adds Katrin Willig, a postdoctoral researcher in Hell’s department.

The genetically modified mice for these experiments originated from the group of Frank Kirchhoff at the Göttingen Max Planck Institute for Experimental Medicine. Images of the nerve cells taken seven to eight minutes apart revealed something surprising: The dendritic spine heads move and change their shape. “In the future, these super-sharp live images could even show how certain proteins are distributed at the contact points,” adds Hell. With such increasingly detailed images of structures in the brain, Hell’s team hopes to shed light onto the composition and function of the synapses on the molecular level.

Such insights could also help to better understand illnesses that are caused by synapse malfunction. Among these so-called synaptopathies are, for example, autism and epilepsy. As Hell explains, “Through STED microscopy and its application in living organisms, we should now be able to gain optical access of such illnesses on the molecular scale for the first time.” As one of the two representatives of the Göttingen Research Center Molecular Physiology of the Brain funded by the German Research Foundation, he is committed to collaboration in his further research. Together with neurobiologists and neurologists, he and his team plan to transfer the progress made in imaging technology into fundamental knowledge about the functioning of our brains.