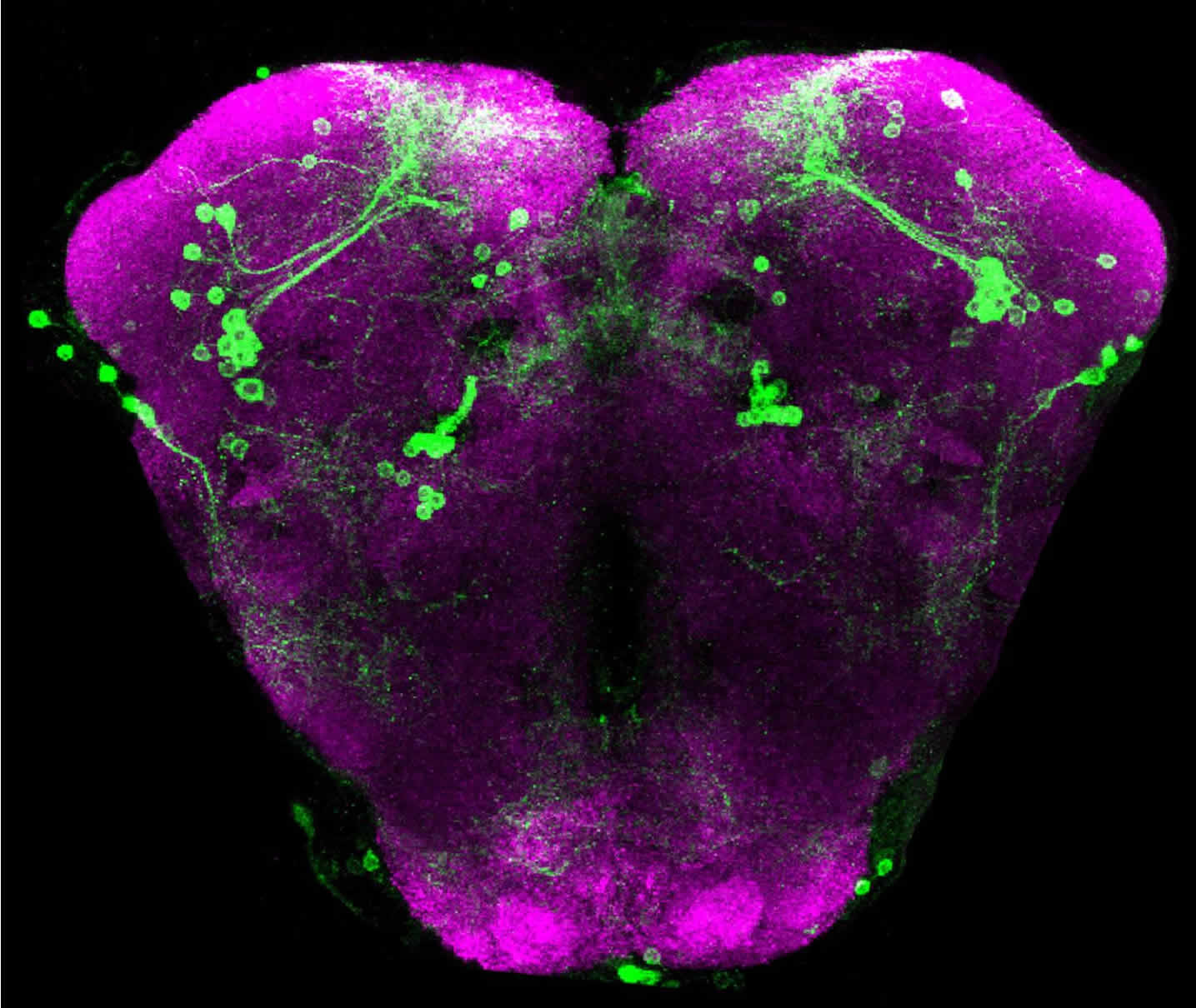 These are dopaminergic neuron clusters (green) of the flight circuit requiring Store-operated Ca2+ Entry (SOCE) in the protocerebrum of an adult Drosophila brain. The brain neuropil is marked by anti-bruchpilot immunostaining (magenta). Credit: Trayambak Pathak.

Calcium is not just required for strong bones – it is an essential requirement for muscle and nerve cells to work normally. The latest research from the National Centre for Biological Sciences (NCBS, Bangalore) shows that maintaining Calcium balance in cells is also needed for another purpose – it may be regulating the levels of an important signalling molecule called dopamine in the brain.

Current work from Prof. Gaiti Hasan’s lab at NCBS has identified new roles for Calcium signalling. Prof. Hasan’s group show that a process called SOCE (Store Operated Calcium Entry) which works to maintain calcium levels in cells could also play a role in maintaining the levels of dopamine, a vital neurotransmitter in the brain.

SOCE is a process by which Calcium ions slowly enter cells to refill Calcium stores that have been depleted by various activities. Since the cell membrane or the outer covering of the cell is impermeable to Calcium ions, Calcium enters the cell through dedicated calcium channels. One such Calcium channel is a protein called Orai, which is an indispensable requirement for SOCE to work. Prof. Hasan’s work used Drosophila flies with mutated Orai genes that prevented normal operation of the SOCE process. A key finding in their experiments was that when SOCE was inhibited only in certain neurons before the flies matured, the emerging adults could not fly. With no SOCE, the wiring process to create a ‘flight circuit’ in the fly brain did not develop – so, why is this important?

The importance of this result is that it revealed a potential link between SOCE and the neurotransmitter called dopamine. Dopamine is an indispensable signal molecule in the brain, whose deficiency causes various diseases, the most famous of them being Parkinson’s syndrome. In the flightless Orai mutant flies, SOCE was inhibited in a set of cells called ‘dopaminergic interneurons’ – nerve cells that used dopamine to relay signals. Further investigations into this phenomenon revealed that SOCE and its role in maintaining Calcium levels within nerve cells affected processes related to dopamine synthesis and transport at a genetic level.

“We expected that inhibiting calcium refill via SOCE in nerve cells would impair their functioning and perhaps ultimately kill them. It was quite a surprise when we discovered instead that the SOCE process was affecting the level of enzymes required for synthesizing dopamine. The bigger surprise was that this phenomenon was occurring at the level of gene expression”, says Trayambak Pathak, who is the first author on the publication which has appeared in the Journal of Neuroscience.

The implications of this work are intriguing. If SOCE operates similarly in mammalian cells, it might have some role to play in diseases where dopamine plays a significant role such as Parkinson’s, Attention Deficit Syndromes (ADS) and even schizophrenia. “There is still so much more to understand in these processes. Our work has opened up a plethora of questions about the importance of SOCE in nerve cells. It may even provide us with new pathways to explore for treatments of conditions such as Parkinson’s disease”, says Prof. Hasan.

Funding: The study was funded by the Department of Science and Technology, Government of India, National Centre for Biological Sciences, and Tata Institute of Fundamental Research.

There’s a Bright Side to Being a ‘Debbie Downer’

Store operated calcium entry (SOCE) is thought to primarily regulate calcium homeostasis in neurons. Subsequent to identification of Orai as the SOCE channel in nonexcitable cells, investigation of Orai function in neurons demonstrated a requirement for SOCE in Drosophila flight. Here, by analysis of an Orai mutant and by controlled expression of a dominant-negative Drosophila Orai transgene, we show that Orai-mediated SOCE is required in dopaminergic interneurons of the flight circuit during pupal development. Expression of dominant-negative Orai in dopaminergic neurons of pupae abolished flight. The loss of Orai-mediated SOCE alters transcriptional regulation of dopaminergic neurons, leading to downregulation of the enzyme tyrosine hydroxylase, which is essential for dopamine synthesis, and the dopamine transporter, which is required for dopamine uptake after synaptic release. These studies suggest that modulation of SOCE could serve as a novel mechanism for restoring dopamine levels in dopaminergic neurons.

SIGNIFICANCE STATEMENT The specificity of an animal’s response to an environmental stimulus is determined in part by the release of neurotransmitters, which are sensed by responding neurons through cognate receptors on their surface. One way by which neurons respond is through release of calcium from intracellular stores followed by store refilling from extracellular calcium sources. This mechanism is called store-operated calcium entry (SOCE). The function of SOCE in neurons has been debated. Here we describe a new function for SOCE in the regulation of neurotransmitter levels in Drosophila flight neurons. This cell-signaling mechanism is required to maintain optimal levels of a key enzyme for dopamine synthesis and may serve as a mechanism for restoring dopamine levels in relevant pathological conditions.