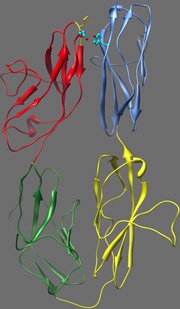 Any amount of alcohol consumed by the mother during pregnancy poses a risk of FASD, a condition that can include the distinct pattern of facial features and growth retardation associated with fetal alcohol syndrome as well as intellectual disabilities, speech and language delays, and poor social skills. But drinking can have radically different outcomes for different women and their babies. While twin studies have suggested a genetic component to susceptibility to FASD, researchers have had little success identifying who is at greatest risk or what genes are at play.

Research from Harvard Medical School and Veterans Affairs Boston Healthcare System sheds new light on this question, identifying for the first time a signaling pathway that might determine genetic susceptibility for the development of FASD. The study was published in the journal Proceedings of the National Academy of Sciences.

“Our work points to candidate genes for FASD susceptibility and identifies a path for the rational development of drugs that prevent ethanol neurotoxicity,” said Michael Charness, chief of staff at VA Boston Healthcare System and HMS professor of neurology. “And importantly, identifying those mothers whose fetuses are most at risk could help providers better target intensive efforts at reducing drinking during pregnancy.”

The discovery also solves a riddle that had intrigued Charness and other researchers for nearly two decades. In 1996, Charness and colleagues discovered that alcohol disrupted the work of a human protein critical to fetal neural development, a major clue to the biological processes of FASD. The protein, L1, projects through the surface of a cell to help it adhere to its neighbors. When Charness and his team introduced the protein to a culture of mouse fibroblasts cells, L1 increased cell adhesion. Tellingly, the effect was erased in the presence of ethanol (beverage alcohol).

Charness and his team went on to develop multiple cell lines from that first culture, and that’s where they encountered the riddle: In some of those lines, alcohol disrupted L1’s adhesive effect, while in others it did not.

“How could it be possible that a cell that expresses L1 is completely sensitive to alcohol, and others that express it are completely insensitive?” asked Charness, who is also faculty associate dean for veterans hospital programs at HMS and assistant dean at Boston University School of Medicine.

Clearly, something else was affecting the protein’s sensitivity to alcohol, but what? Studies of twins provided one clue: Identical twins are more likely than fraternal twins to have the same diagnosis, positive or negative, for FASD. “That concordance suggests that there are modifying genes, susceptibility genes, that predispose to this condition,” Charness said.

In the current study, Charness’ team and collaborators at the University of North Carolina School of Medicine in Chapel Hill conducted cell culture experiments to identify specific molecular events that contribute to the alcohol sensitivity of L1 adhesion molecules. They focused on what was happening to the L1 molecule inside a cell that could affect an event outside the cell such as disruption by alcohol.

“We found that phosphorylation events that begin inside the cell can render the external portion of the L1 adhesion molecule more vulnerable to inhibition by alcohol,” said Xiaowei Dou, HMS instructor in neurology in the Charness Lab and first author on the new study. “Phosphorylation was controlled by the enzyme ERK2, and occurred at a specific location on the internal portion of the L1 molecule.”

Phosphorylation plays a significant role in a wide range of cellular processes. By adding a phosphate group to a protein or other molecule, phosphorylation turns many protein enzymes on and off, and thereby alters their function and activity.

The researchers also found that variations in ERK2 activity correlated with differences in L1 sensitivity to alcohol that they observed across cell lines and among different strains of mice. “Dou showed that he could take these cells that had been insensitive to alcohol for 13-14 years, and make them sensitive by ramping up the activity of this kinase” Charness said.

These variations suggest that genes for ERK2 and the signaling molecules that regulate ERK2 activity might influence genetic susceptibility to FASD. Moreover, their identification of a specific locus that regulates the alcohol sensitivity of L1 might facilitate the rational design of drugs that block alcohol neurotoxicity.

The findings will also help guide an international consortium in its search for genes linked to families with fetal alcohol spectrum disorders.

“Prenatal alcohol exposure is the leading preventable cause of birth defects and developmental disorders in the United States,” said Kenneth Warren, acting director of the National Institute on Alcohol Abuse and Alcoholism (NIAAA),which supported the study. “These new findings are yet another important contribution from researchers who have been at the forefront of scientific discovery in FASD.”