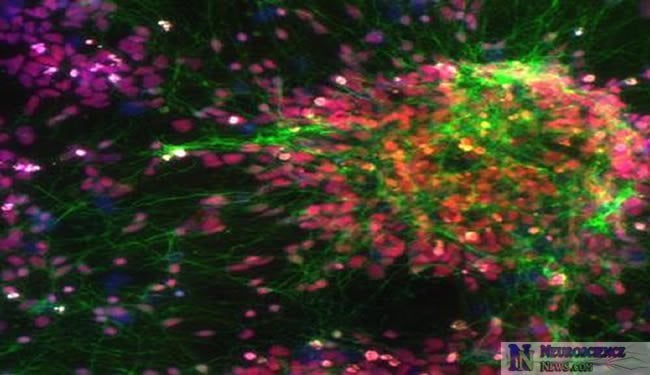 A team of scientists at Penn State University, the Salk Institute for Biological Studies, and other institutions have developed a method for recreating a schizophrenic patient’s own brain cells, which then can be studied safely and effectively in a Petri dish. The method brings researchers a step closer to understanding the biological underpinnings of schizophrenia. The method also is expected to be used to study other mysterious diseases such as autism and bipolar disorder, and the researchers hope that it will open the door to personalized medicine — customized treatments for individual sufferers of a disease based on genetic and cellular information. The study will be published in a future edition of the journal Nature and will be posted on the journal’s advance online website on 13 April 2011.

Gong Chen, an associate professor of biology at Penn State and one of the study’s authors, explained that the team first took samples of skin cells from schizophrenic patients. Then, using molecular-biology techniques, they reprogrammed these original skin cells to become unspecialized or undifferentiated stem cells called induced pluripotent stem cells (iPSCs). “A pluripotent stem cell is a kind of blank slate,” Chen explained. “During development, such stem cells differentiate into many diverse, specialized cell types, such as a muscle cell, a brain cell, or a blood cell.”

After generating iPSCs from skin cells, the authors cultured them to become brain cells, or neurons. They then compared the neurons derived from schizophrenic patients to the neurons created from the iPSCs of healthy individuals. They found that the neurons generated from schizophrenic patients were, in fact, distinct: compared with healthy neurons, they made fewer connections with each other. Kristen Brennand, a Salk researcher and one of the study’s authors, then administered a number of frequently prescribed antipsychotic medications to test the drugs’ ability to improve how neurons communicate with neighboring cells. “Now, for the very first time, we have a model system that allows us to study how antipsychotic drugs work in live, genetically identical neurons from patients with known clinical outcomes, and we can start correlating pharmacological effects with symptoms,” Brennand said.

Chen, who contributed to the study by using electrophysiology techniques to test the function of the iPSC-derived neurons, described the new method as “patient specific,” offering a step toward personalized medicine for sufferers of schizophrenia and potentially other diseases. “What’s so exciting about this approach is that we can examine patient-derived neurons that are perhaps equivalent to a particular patient’s own neural cells,” Chen said. “Obviously, we don’t want to remove someone’s brain cells to experiment on, so recreating the patient’s brain cells in a Petri dish is the next best thing for research purposes. Using this method, we can figure out how a particular drug will affect that particular patient’s brain cells, without needing the patient to try the drug, and potentially, to suffer the side effects. The patient can be his or her own guinea pig for the design of his or her own treatment, without having to be experimented on directly.”

Lead author Fred Gage, a professor at Salk’s Laboratory of Genetics and holder of the Vi and John Adler Chair for Research on Age-Related Neurodegenerative Diseases, explained that schizophrenia exemplifies many of the research challenges posed by complex psychiatric disorders. “This model not only affords us the opportunity to look at live neurons from schizophrenia patients and healthy individuals to understand more about the disease mechanism, but also it allows us to screen for drugs that may be effective in reversing it,” Gage said.

Schizophrenia, which is defined by a combination of paranoid delusions, auditory hallucinations, and diminished cognitive function, afflicts one percent of the population worldwide, corresponding to nearly three million people in the United States alone. Genetic evidence indicates that many different combinations of genetic lesions — some of them affecting the susceptibility to environmental influences — may lead to a variety of signs and symptoms collectively labeled schizophrenia.

“Nobody knows how much the environment contributes to the disease,” said Brennand. “By growing neurons in a dish, we can take the environment out of the equation and start focusing on the underlying biological problems.” In another part of the study, Brennand used a modified rabies virus, developed by Salk professors Edward Callaway and John Young, to highlight the connections between neurons. The viral tracer made it apparent that the schizophrenic neurons connected less frequently with each other and had fewer projections growing out from their cell bodies. In addition, gene-expression profiles identified almost 600 genes whose activity was misregulated in these neurons; 25 percent of those genes had been implicated in schizophrenia before.

Gage added that, for many years, mental illness has been thought of as a strictly social or environmental disease. “Many people believed that if affected individuals just worked through their problems, they could overcome them,” he said. “But we are showing real biological dysfunctions in neurons that are independent of the environment.”

In addition to Gage, Brennand, and Chen, other researchers who contributed to the study include Anthony Simone, Jessica Jou, Chelsea Gelboin-Burkhart, Ngoc Tran, Sarah Sangar, Yan Li, Yanglin Mu and Diana Yu in the Gage Laboratory; Shane McCarthy at the Cold Spring Harbor Laboratory in New York; and Jonathan Sebat at the University of California at San Diego.

The work was funded, in part, by the California Institute for Regenerative Medicine, the Lookout Foundation, the Mathers Foundation, and the Helmsley Foundation.