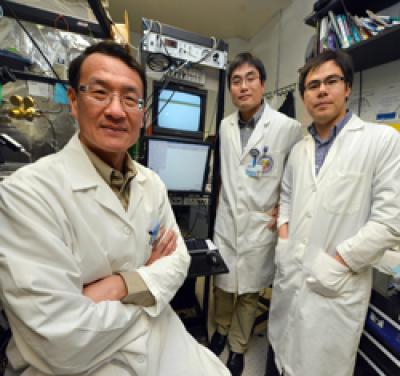 Scientists Learn more about how Inhibitory Brain Cells get Excited

Scientists have found an early step in how the brain’s inhibitory cells get excited.

A natural balance of excitement and inhibition keeps the brain from firing electrical impulses randomly and excessively, resulting in problems such as schizophrenia and seizures. However excitement is required to put on the brakes.

“When the inhibitory neuron is excited, its job is to suppress whatever activity it touches,” said Dr. Lin Mei, Director of the Institute of Molecular Medicine and Genetics at the Medical College of Georgia at Georgia Regents University and corresponding author of the study in Nature Neuroscience.

Mei and his colleagues found that the protein erbin, crucial to brain development, is critical to the excitement.

It was known that a protein on the cell surface called TARP gamma-2, also known as stargazing, interacts with a brain cell receptor called AMPA, ensuring the receptor finds the cells surface. It is here that the receptor can be activated by the neurotransmitter glutamate. AMPA receptor activation is essential to activation of the NMDA receptor, which enables cells to communicate, ultimately enabling learning and memory, Mei said. How TARP gamma-2 was controlled, was an unknown.

Inside the nucleus of inhibitory cells in areas of the brain that control learning and memory, the researchers found erbin interacts with TARP gamma-2, enabling it to survive. “If you do not have this mechanism, your stargazing becomes very unstable and your AMPA receptor cannot be on the surface so this neuron is inactive,” Mei said. They also found that erbin is only in these inhibitory neurons, called interneurons. They’re already working on what they believe to be the counterpart for excitatory cells, which account for about 80 percent of brain cells.

“Interneurons basically control firing,” releasing GABA, a major inhibitory neurotransmitter, Mei said. They tone down or synchronize the activity of pyramidal cells, pyramid-shaped neurons that get both excitatory and inhibitory input then make the call on what action to take.

When scientists ablated the erbin gene in mice or kept erbin from interacting with TARP gamma-2, a protein that helps anchor the AMPA receptor on the cell surface, TARP gamma-2 couldn’t do its job. The result was less receptors on the cell surface and mice that were hyperactive with impaired learning and memory.

Cell activity hinges on receptor activity and receptors must be anchored on the cell surface to work. Ensuring AMPA receptors are strategically placed is a lifelong task since the busy receptors wear out and each brain cell has tons of them, Mei said.

Men Think They’re Brighter Than They Are and Women Underestimate Their IQ. Why?

He and his colleagues reported in the journal, Neuron in 2007, two genes, neuregulin-1 and its receptor ErbB4, that help maintain a healthy balance of excitement and inhibition by releasing GABA at the sight of inhibitory synapses, the communication paths between neurons. Years before, they showed the genes were also at excitatory synapses, where they also could quash activation. Both genes are involved in human development and implicated in schizophrenia and cancer.

Mei is a Georgia Research Alliance Eminent Scholar in Neuroscience.