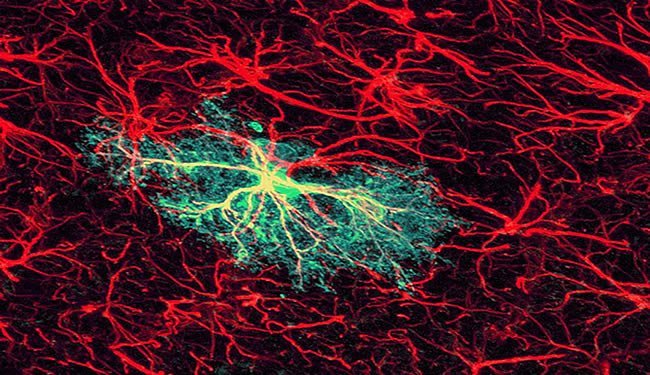 Revealing the Stars of Brain Adaptability

Global network activity in the brain modulates local neural circuitry via calcium signaling in non-neuronal cells called astrocytes, according to research led by Hajime Hirase of the RIKEN Brain Science Institute. The finding clarifies the link between two important processes in the brain.

Activity in large-scale brain networks is thought to modulate changes in neuronal connectivity, so-called ‘synaptic plasticity’, in the cerebral cortex. The neurotransmitter acetylcholine regulates global brain activity associated with attention and awareness, and is involved in plasticity.

To investigate how these processes are linked, Hirase and his colleagues simultaneously stimulated the whiskers of mice and the nucleus basalis of Meynert (NBM), a basal forebrain structure containing neurons that synthesize acetylcholine and project widely to the cortex. Using electrodes and an imaging technique called two-photon microscopy, performed through a ‘cranial window’, they monitored the responses of cells in the barrel cortex, which receives inputs from the whiskers.

Recordings from the electrodes showed that repeated co-stimulation of the whiskers and NBM induced plasticity in the barrel cortex. This plasticity depended on two types of receptors—muscarinic acetylcholine receptors (mAChRs) and N-methyl-D-aspartic acid receptors (NMDARs). Two-photon imaging microscopy further revealed that activation of the mAChRs during co-stimulation elevated the concentration of calcium ions within astrocytes of the barrel cortex.

The researchers repeated these experiments in mutant mice lacking the receptor that controls the release of calcium ions in astrocytes. Since co-stimulation of whiskers and NBM did not induce plasticity in the mutants, Hirase and colleagues concluded that calcium signaling in astrocytes acts as a ‘gate’ linking the changes in global brain state induced by acetylcholine to activity in local cortical circuits.

Furthermore, the researchers found that stimulation of the NBM led to an increase in the extracellular concentration of the amino acid D-serine in the normal, but not the mutant, mice. D-serine is secreted by astrocytes and activates NMDARs. Hirase’s team had previously shown that astrocytes are electrically silent in living rodents even in the presence of neural activity. The new findings showed that the biochemical, as opposed to electrical, activation of astrocytes induces them to release the transmitter that modulates synaptic plasticity in the neuronal circuitry.

“Our study is probably the first to show that calcium signaling in astrocytes is related to neuronal circuit plasticity in living animals,” says Hirase. “We are now studying if this type of calcium signaling occurs in all parts of an astrocyte or is restricted to some parts of the cell.”

The corresponding author for this highlight is based at the Laboratory for Neuron–Glia Circuitry, RIKEN Brain Science Institute