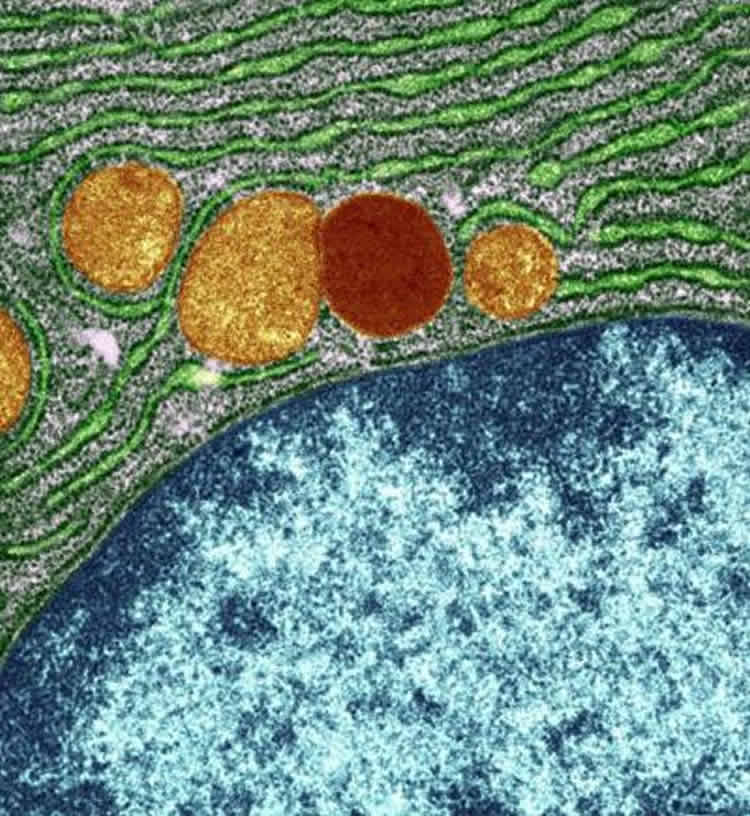 A color-enhanced electron micrograph shows the nucleus of a cell (blue) adjacent to the rough endoplasmic reticulum (green), where proteins are manufactured from mRNA templates produced by the nucleus. Credit University of Edinburgh, via the Wellcome Trust.

Cells Put off Protein Production During Times of Stress

Living cells are like miniature factories, responsible for the production of more than 25,000 different proteins with very specific 3-D shapes. And just as an overwhelmed assembly line can begin making mistakes, a stressed cell can end up producing misshapen proteins that are unfolded or misfolded.

Now Duke University researchers in North Carolina and Singapore have shown that the cell recognizes the buildup of these misfolded proteins and responds by reshuffling its workload, much like a stressed out employee might temporarily move papers from an overflowing inbox into a junk drawer.

The study, which appears Sept. 11, 2014 in Cell, could lend insight into diseases that result from misfolded proteins piling up, such as Alzheimer’s disease, ALS, Huntington’s disease, Parkinson’s disease, and type 2 diabetes.

“We have identified an entirely new mechanism for how the cell responds to stress,” said Christopher V. Nicchitta, Ph.D., a professor of cell biology at Duke University School of Medicine. “Essentially, the cell remodels the organization of its protein production machinery in order to compartmentalize the tasks at hand.”

The general architecture and workflow of these cellular factories has been understood for decades. First, DNA’s master blueprint, which is locked tightly in the nucleus of each cell, is transcribed into messenger RNA or mRNA. Then this working copy travels to the ribosomes standing on the surface of a larger accordion-shaped structure called the endoplasmic reticulum (ER). The ribosomes on the ER are tiny assembly lines that translate the mRNAs into proteins.

When a cell gets stressed, either by overheating or starvation, its proteins no longer fold properly. These unfolded proteins can set off an alarm — called the unfolded protein response or UPR – to slow down the assembly line and clean up the improperly folded products. Nicchitta wondered if the stress response might also employ other tactics to deal with the problem.

In this study, Nicchitta and his colleagues treated tissue culture cells with a stress-inducing agent called thapsigargin. They then separated the cells into two groups — those containing mRNAs associated with ribosomes on the endoplasmic reticulum, and those containing mRNAs associated with free-floating ribosomes in the neighboring fluid-filled space known as the cytosol.

“You can slow down protein production, but sometimes slowing down the workflow is not enough,” Nicchitta said. “You can activate genes to help chew up the misfolded proteins, but sometimes they are accumulating too quickly. Here we have discovered a mechanism that does one better — it effectively puts everything on hold. Once things get back to normal, the mRNAs are released from the holding pattern.”

Interestingly, the researchers found that shuttling ribosomes between the ER and the cytoplasm during stress only affected the subset of mRNAs that would give rise to secreted proteins like hormones or membrane proteins like growth factor receptors — the types of proteins that set off the stress response if they’re misfolded. They aren’t sure yet what this means.

Nicchitta is currently searching for the factors that ultimately determine which mechanisms cells employ during the stress response. He has already pinpointed one promising candidate, and is looking to see how cells respond to stress when that factor is manipulated.

The research was supported by the National Institutes of Health (GM101533) and the Singapore Ministry of Health (Duke/Duke-NUS Research Collaboration Award).