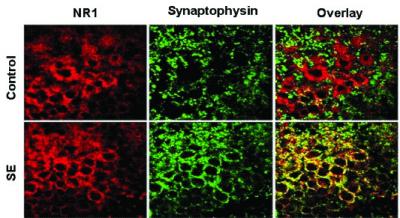 Photos depict NMDA receptors moving to the neuron surface during status epilepticus (SE), persistent seizures. The NMDA receptors are in red (NR1), and the cell surface marker is in green (synaptophysin). When they are at the same location (cell surface), the overlap of red and green becomes yellow. The existence of more yellow with SE suggests many more surface NMDA receptors, which can serve as targets for new medication. Credit to Dr. David E. Nayor.
Home
Featured

In a promising finding for epileptic patients suffering from persistent seizures known as status epilepticus, researchers reported today that new medication could help halt these devastating seizures. To do so, it would have to work directly to antagonize NMDA receptors, the predominant molecular device for controlling synaptic activity and memory function in the brain.

“Despite the development of new medications to prevent seizures, status epilepticus remains a life-threatening condition that can cause extensive brain damage in the patients that survive these persistent seizures,” said David E. Naylor, MD, PhD, a lead researcher at the Los Angeles Biomedical Research Institute at Harbor-UCLA Medical Center (LA BioMed) and corresponding author of the new study. “Our research holds promise for the development of new therapies to treat this devastating condition because we have found a potential new target for medical intervention that should bolster the current standard therapies to treat the acute seizures. It may also prevent the long-term adverse effects of persistent seizure activity on the brain.”

The research, reported online in the Neurology of Disease journal, used animal models to assess cellular activity in the brain during persistent seizures. It found that the seizure activity seemed to force the NMDA receptors from the interior to the surface of nerve cells causing their activity to increase by approximately 38%.

Notes about this epilepsy research article

In addition to Dr. Naylor, the researchers who participated in the study were Drs. Hantao Liu at the Veterans Administration Greater Los Angeles County Healthcare System’s Department of Neurology and Jerome Niquet and Claude G. Wasterlain of the David Geffen School of Medicine at the University of California, Los Angeles Department of Neurology. The research was funded by LA BioMed and a Veterans Administration Career Development Award.