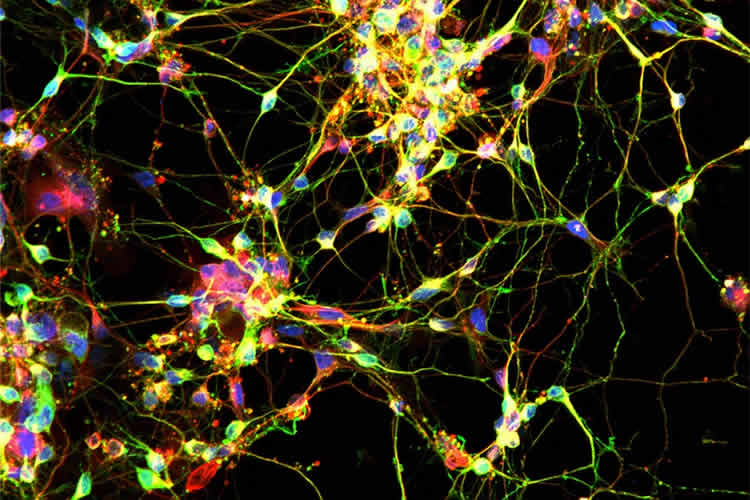 The scientists had the unique opportunity to study contributing factors to Parkinson's disease through a set of identical twins, one of which has the disease. Credit New York Stem Cell Foundation.

Attributed to a combination of genetic and nongenetic factors, Parkinson’s disease has no completely effective therapy or cure. Parkinson’s disease is moderately heritable, but the mechanisms of this inheritance are not well understood. While genetic forms of the disease exist, sporadic forms are far more common.

“The unique scenario of identical twins, one with this disease and one without, allowed our scientists an unprecedented look into the mechanisms of Parkinson’s disease,” said Susan L. Solomon, NYSCF Chief Executive Officer. “Advanced stem cell research techniques allow us to push the boundaries of science and see what actually goes wrong at the cellular level, step by step during the disease process.”

DNA mutations resulting in the production of a specific enzyme called glucocerebrosidase (GBA) have been linked to a five-fold greater risk of developing Parkinson’s disease; however, only 30% of individuals with this mutation have been shown to develop Parkinson’s disease by the age of 80. This discordance suggests that multiple factors contribute to the development of Parkinson’s disease, including both genetic and non-genetic factors. To date, there has been no appropriate model to identify and test multiple triggers leading to the onset of the disease.

In this study, published today in Cell Reports, a set of identical twins, both with a GBA mutation, provided a unique opportunity to evaluate and dissect the genetic and non-genetic contributions to the development of Parkinson’s disease in one twin, and the lack of disease in the other. The scientists made induced pluripotent stem (iPS) cells from skin samples from both twins to generate a cellular model of Parkinson’s in a dish, recapitulating key features of the disease, specifically the accumulation of α-synuclein and dopamine deficiency.

Upon analyzing the cell models, the scientists found that the dopamine-producing neurons from both twins had reduced GBA enzymatic activity, elevated α-synuclein protein levels, and a reduced capacity to synthesize and release dopamine. In comparison to his unaffected brother, the neurons generated from the affected twin produced less dopamine, had higher levels of an enzyme called monoamine oxidase B (MAO-B), and poor ability to connect with each other. Treating the neurons with molecules that lowered the activity of MAO-B together with overexpressed GBA normalized α -synuclein and dopamine levels in the cell models. This suggests that a combination therapy for the affected twin may be possible by simultaneously targeting these two enzymes.

“The subject of Parkinson’s disease discordant twins gave us an incredible opportunity to utilize stem cell models of disease in a dish to unlock some of the biological mechanisms of disease,” said Dr. Scott Noggle, NYSCF Vice President, Stem Cell Research and The NYSCF – Charles Evans Senior Research Fellow for Alzheimer’s Disease. “Working with these various different groups and scientists added to the depth and value of the research and we hope our findings will be applicable to other Parkinson’s disease patients and other neurodegenerative disorders.”

Chickenpox Virus May Trigger the Onset of Alzheimer’s Disease