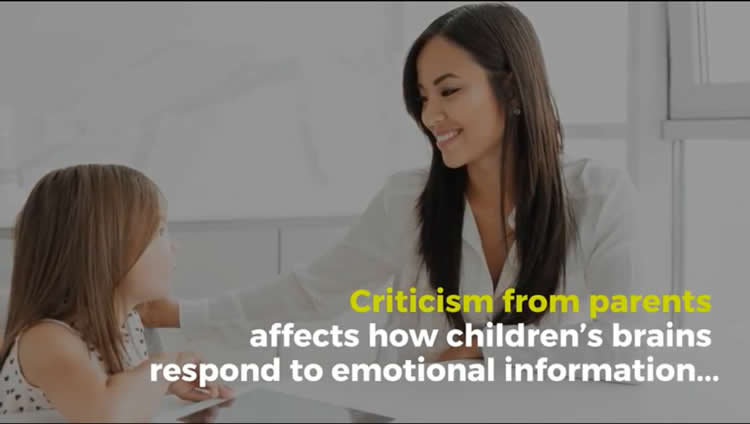 The researchers wanted to examine how exposure to parental criticism impacts the way that children process and pay attention to facial expressions of emotion. NeuroscienceNews.com image is apated from the Binghamton University video.
Home
Featured

“These findings suggest that children with a critical parent might avoid paying attention to faces expressing any type of emotion,” said Kiera James, graduate student of psychology at Binghamton University, and lead author of the paper. “This behavior might affect their relationships with others and could be one reason why children exposed to high levels of criticism are at risk for things like depression and anxiety.”

The researchers wanted to examine how exposure to parental criticism impacts the way that children process and pay attention to facial expressions of emotion. One way to look at attention is through a neural marker called the Late Positive Potential (LPP), which provides a measure of how much someone is paying attention to emotional information, such as a face that is happy or sad.

James and fellow researchers had parents of 7 to 11-year-old children talk about their child for five minutes. These statements were later coded for levels of criticism. They also measured the brain activity of the children as they viewed a series of pictures of faces showing different emotions. The researchers found that children of highly critical parents displayed less attention to all of the emotional facial expressions than children of parents displaying low levels of criticism.

The researchers hope to follow up these results with another study examining what happens in the brains of children in real time when they are receiving positive and negative comments from their parents.

There is growing evidence for the role of environmental influences on children’s information-processing biases for affectively salient stimuli. The goal of this study was to extend this research by examining the relation between parental criticism (expressed emotion-criticism, or EE-Crit) and children’s processing of facial displays of emotion. Specifically, we examined the relation between EE-Crit and children’s sensitivity in detecting facial displays of emotion. We also examined a neural marker of sustained attention, the late positive potential (LPP) event-related potential component (ERP). Participants were 87 children (ages 7–11 years; 53.3% female, 77.8% Caucasian) and their parents (ages 24–71; 90% female, 88.9% Caucasian). Parents completed the Five-Minute Speech Sample to determine levels of EE-Crit toward their child. Children completed a morphed faces task during which behavioral and ERP responses were assessed. Although there were no group differences in sensitivity in detecting facial displays of emotion, we found that children of parents exhibiting high, compared to low, EE-Crit displayed less attention (smaller LPP magnitudes) to all facial displays of emotion (fearful, happy, sad). These results suggest that children of critical parents may exhibit an avoidant pattern of attention to affectively-salient interpersonal stimuli.