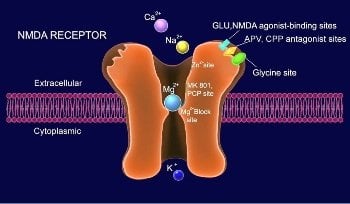 For several years, the pharmaceutical industry has tried to develop drugs that target a specific neurotransmitter receptor in the brain, the NMDA receptor. This receptor is present on almost every neuron in the human brain and is involved in learning and memory. NMDA receptors also have been implicated in several neurological and psychiatric conditions such as Alzheimer’s disease, Parkinson’s disease, schizophrenia and depression.

But drug companies have had little success developing clinically effective drugs that target this receptor.

Now, researchers at Oregon Health & Science University’s Vollum Institute believe they may understand why. And what they’ve discovered may help in the development of new therapies for these conditions.

As drug companies have worked to develop compounds that manipulate the activity of these receptors, the focus of much of this drug discovery effort has been on a specific NMDA receptor subtype. In their Journal of Neuroscience paper, the OHSU scientists describe their discovery — that the specific receptor subtype that drug companies have seen as a target is an almost nonexistent contributor of NMDA receptor action.

“What our paper shows is that one reason no drugs have worked well to this point may be because that particular NMDA receptor subtype isn’t there in high quantities. The target they’ve been looking for isn’t the target that’s there,” said Ken Tovar, Ph.D., a senior postdoctoral fellow at the Vollum Institute. Tovar’s co-authors on the paper were Gary Westbrook, M.D., senior scientist and co-director of the Vollum Institute, and Matthew McGinley, Ph.D., a former graduate student in the Westbrook laboratory.

Tovar said these findings could provide a new target for drug development.

“If you know what’s there, then you know what to go after — you just have to figure out how to do it,” Tovar said.

The OHSU study also provides clues into how the function of this most common NMDA receptor subtype might be manipulated. Highly specific drugs interact with either GluN2A or GluN2B. Tovar and colleagues demonstrated that when GluN2A and GluN2B coexist in the same receptor, molecules that targeted GluN2A change the behavior of the receptor in ways that could be clinically beneficial.

Reducing Alcohol Consumption by Working Out

“NMDA receptors have been implicated in a diverse list of neurological and psychiatric conditions. Thus, the more we know about how to modulate the behavior of the receptors that are there — at synapses — the greater chance we have of finding drugs to treat these conditions,” Tovar said.

“From the perspective of drug development, knowing the nature of your target is one way to keep drug development costs down,” said Tovar. “Spending resources investigating a target that turns out to be unimportant means those costs get passed on to the drugs that are effective.”

Notes about this NMDA receptor and neuroscience research