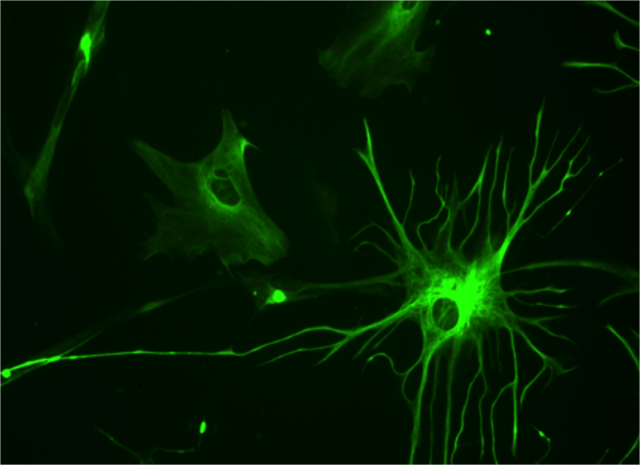 The image shows a 23 week old human astrocyte stained for GFAP. The image is by Bruno Pascal. More info on the image is in the notes.
Home
Electrophysiology

Neuroscience researchers from Tufts University have found that our star-shaped brain cells, called astrocytes, may be responsible for the rapid improvement in mood in depressed patients after acute sleep deprivation. This in vivo study, published in the current issue of Translational Psychiatry, identified how astrocytes regulate a neurotransmitter involved in sleep. The researchers report that the findings may help lead to the development of effective and fast-acting drugs to treat depression, particularly in psychiatric emergencies.

Drugs are widely used to treat depression, but often take weeks to work effectively. Sleep deprivation, however, has been shown to be effective immediately in approximately 60% of patients with major depressive disorders. Although widely-recognized as helpful, it is not always ideal because it can be uncomfortable for patients, and the effects are not long-lasting.

During the 1970s, research verified the effectiveness of acute sleep deprivation for treating depression, particularly deprivation of rapid eye movement sleep, but the underlying brain mechanisms were not known.

Most of what we understand of the brain has come from research on neurons, but another type of largely-ignored cell, called glia, are their partners. Although historically thought of as a support cell for neurons, the Phil Haydon group at Tufts University School of Medicine has shown in animal models that a type of glia, called astrocytes, affect behavior.

Haydon’s team had established previously that astrocytes regulate responses to sleep deprivation by releasing neurotransmitters that regulate neurons. This regulation of neuronal activity affects the sleep-wake cycle. Specifically, astrocytes act on adenosine receptors on neurons. Adenosine is a chemical known to have sleep-inducing effects.

“In this study, we administered three doses of an adenosine receptor agonist to mice over the course of a night that caused the equivalent of sleep deprivation. The mice slept as normal, but the sleep did not reduce adenosine levels sufficiently, mimicking the effects of sleep deprivation. After only 12 hours, we observed that mice had decreased depressive-like symptoms and increased levels of adenosine in the brain, and these results were sustained for 48 hours,” said first author Dustin Hines, Ph.D., a post-doctoral fellow in the department of neuroscience at Tufts University School of Medicine (TUSM).

“By manipulating astrocytes we were able to mimic the effects of sleep deprivation on depressive-like symptoms, causing a rapid and sustained improvement in behavior,” continued Hines.

“Further understanding of astrocytic signaling and the role of adenosine is important for research and development of anti-depressant drugs. Potentially, new drugs that target this mechanism may provide rapid relief for psychiatric emergencies, as well as long-term alleviation of chronic depressive symptoms,” said Naomi Rosenberg, Ph.D., dean of the Sackler School of Graduate Biomedical Sciences and vice dean for research at Tufts University School of Medicine. “The team’s next step is to further understand the other receptors in this system and see if they, too, can be affected.”

Psilocybin Reduces Relapses for Those With Alcohol Use Disorder

Senior author, Phillip G. Haydon, Ph.D., is the Annetta and Gustav Grisard professor and chair of the department of neuroscience at Tufts University School of Medicine (TUSM). Haydon is also a member of the neuroscience program faculty at the Sackler School of Graduate Biomedical Sciences at Tufts.