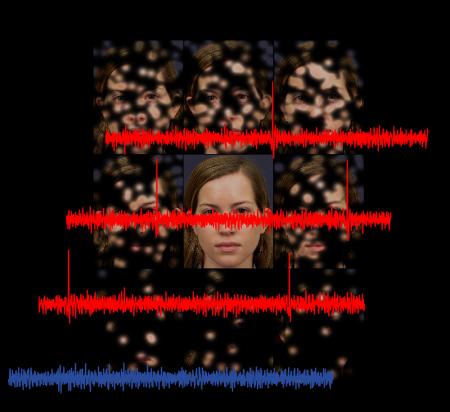 By using the implanted electrodes to record the firings of individual neurons, the researchers were able to observe activity as participants looked at images of different facial regions, and then correlate the neuronal responses with the pictures. In the control group of epilepsy patients without autism, the neurons responded most strongly to the eye region of the face, whereas in the two ASD patients, the neurons responded most strongly to the mouth region. Credited to Caltech /Adolphs Lab.
Home
Autism

Researchers find neurons in amygdala of autistic individuals have reduced sensitivity to eye region of others’ faces.

Difficulties in social interaction are considered to be one of the behavioral hallmarks of autism spectrum disorders (ASDs). Previous studies have shown these difficulties to be related to differences in how the brains of autistic individuals process sensory information about faces. Now, a group of researchers led by California Institute of Technology (Caltech) neuroscientist Ralph Adolphs has made the first recordings of the firings of single neurons in the brains of autistic individuals, and has found specific neurons in a region called the amygdala that show reduced processing of the eye region of faces. Furthermore, the study found that these same neurons responded more to mouths than did the neurons seen in the control-group individuals.

“We found that single brain cells in the amygdala of people with autism respond differently to faces in a way that explains many prior behavioral observations,” says Adolphs, Bren Professor of Psychology and Neuroscience and professor of biology at Caltech and coauthor of a study in the November 20 issue of Neuron that outlines the team’s findings. “We believe this shows that abnormal functioning in the amygdala is a reason that people with autism process faces abnormally.”

The amygdala has long been known to be important for the processing of emotional reactions. To make recordings from this part of the brain, Adolphs and lead author Ueli Rutishauser, assistant professor in the departments of neurosurgery and neurology at Cedars-Sinai Medical Center and visiting associate in biology at Caltech, teamed up with Adam Mamelak, professor of neurosurgery and director of functional neurosurgery at Cedars-Sinai, and neurosurgeon Ian Ross at Huntington Memorial Hospital in Pasadena, California, to recruit patients with epilepsy who had electrodes implanted in their medial temporal lobes—the area of the brain where the amygdala is located—to help identify the origin of their seizures. Epileptic seizures are caused by a burst of abnormal electric activity in the brain, which the electrodes are designed to detect. It turns out that epilepsy and ASD sometimes go together, and so the researchers were able to identify two of the epilepsy patients who also had a diagnosis of ASD.

By using the implanted electrodes to record the firings of individual neurons, the researchers were able to observe activity as participants looked at images of different facial regions, and then correlate the neuronal responses with the pictures. In the control group of epilepsy patients without autism, the neurons responded most strongly to the eye region of the face, whereas in the two ASD patients, the neurons responded most strongly to the mouth region. Moreover, the effect was present in only a specific subset of the neurons. In contrast, a different set of neurons showed the same response in both groups when whole faces were shown.

“It was surprising to find such clear abnormalities at the level of single cells,” explains Rutishauser. “We, like many others, had thought that the neurological abnormalities that contribute to autism were spread throughout the brain, and that it would be difficult to find highly specific correlates. Not only did we find highly specific abnormalities in single-cell responses, but only a certain subset of cells responded that way, while another set showed typical responses to faces. This specificity of these cell populations was surprising and is, in a way, very good news, because it suggests the existence of specific mechanisms for autism that we can potentially trace back to their genetic and environmental causes, and that one could imagine manipulating for targeted treatment.”

“We can now ask how these cells change their responses with treatments, how they correspond to similar cell populations in animal models of autism, and what genes this particular population of cells expresses,” adds Adolphs.

To validate their results, the researchers hope to identify and test additional subjects, which is a challenge because it is very hard to find people with autism who also have epilepsy and who have been implanted with electrodes in the amygdala for single-cell recordings, says Adolphs.

“At the same time, we should think about how to change the responses of these neurons, and see if those modifications correlate with behavioral changes,” he says.

Depression in Pregnancy Increases Risk of Behavioral Problems in Children

Funding for the research outlined in the Neuron paper, titled “Single-neuron correlates of abnormal face processing in autism,” was provided by the Simons Foundation, the Gordon and Betty Moore Foundation, the Cedars-Sinai Medical Center, Autism Speaks, and the National Institute of Mental Health. Additional coauthors were Caltech postdoctoral scholar Oana Tudusciuc and graduate student Shuo Wang.

Notes about this Autism and neuroscience research