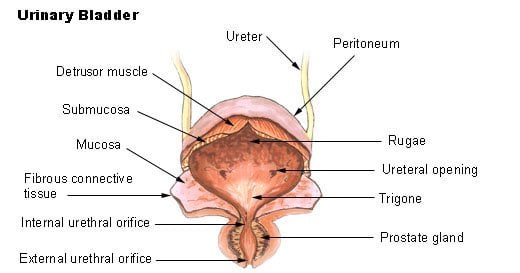 The spinal cord’s role in bladder function is critical, as it relays information between the brain and body. After suffering SCI, urinary dysfunction occurs. The loss of control happens because the axons, or nerve fibers which transmit information from neuron to neuron, are disconnected from the brain stem where the body’s urination commands reside. This is a labeled anatomical diagram of the bladder.
Home
Featured

For the first time, researchers have restored significant bladder function through nerve regeneration in rats with the most severe spinal cord injuries (SCI). The breakthrough paired a traditional nerve bridge graft with a novel combination of scar degrading and growth factor treatments to grow new nerve cells from the thoracic level to the lower spinal cord region. Details of the discovery appear in the June 26 issue of the Journal of Neuroscience.

Neuroscientists from Case Western Reserve University School of Medicine and Cleveland Clinic built a regeneration bridge across a lesion in animals with complete gap transections of their spinal cords. Although the animals did not regain the ability to walk, the procedure did allow them to recover a strong level of bladder control.

Jerry Silver, PhD, professor of neurosciences at the School of Medicine, and Yu-Shang Lee, PhD, assistant staff scientist in the Lerner Research Institute of Cleveland Clinic, created the bridge using a scaffold of multiple segments of the animals’ own peripheral nerves. Key to the regeneration was surrounding the graft and both spinal cord stumps with a stimulating growth factor and an enzyme to dissolve scar tissue, which inhibits the nerve fibers from crossing over the bridge and traveling down the spinal cord.

“While urinary control is complex and recovery took several months, it was clear that this primitive function lost to spinal cord injury does possess the capacity to rewire itself, even when a relatively small number of axons are regenerated,” Silver said.

The spinal cord’s role in bladder function is critical, as it relays information between the brain and body. After suffering SCI, urinary dysfunction occurs. The loss of control happens because the axons, or nerve fibers which transmit information from neuron to neuron, are disconnected from the brain stem where the body’s urination commands reside.

The creation of the neural bridge, which spans the open cavity between the severed ends of the spinal cord, kills the axons that normally reside within the nerve. However, the glial cells of the bridge, called Schwann cells, which form an aligned growth promoting pathway, remain alive in the nerve and encourage the severed nearby axons in the spinal cord to enter the bridge and regrow.

Establishing functional regeneration across the gap and down the rats’ spinal cord presented challenges. The first obstacle was coaxing the regenerating axons to enter and transcend the bridge. Then the axons had to grow well beyond the bridge and form connections capable of relaying nerve signals once they arrived at their destination – approximately two centimeters down the spinal cord.

To achieve these results, Silver and Lee added Fibroblast Growth Factor to help align the Schwann cells in the graft with the scar tissue cells at the bridge’s interfaces. Next, they injected an enzyme called chondroitinase to break down inhibitory molecules that often form in scar tissue and curtail regeneration at both ends of the bridge.

“We were especially surprised and excited to discover that once a permissive environment was created, a subset of neurons situated largely within the brainstem, which play important roles in bladder function, slowly re-grew lengthy axons far down the cord,” said Dr. Silver.

The model is highly relevant to people with a complete SCI, a total loss of function below the lesion, referred to as an A grade in the American Spinal Injury Association’s impairment scale. The Cleveland-based team’s work offers hope that the approach ultimately could translate to restoration of bodily functions for paralyzed humans.

“The future challenge will be to optimize the technique and further increase the intrinsic growth potential of these special neurons to facilitate more substantial and rapid axonal regeneration not only after acute but also after chronic SCI,” Lee said.

Silver and Lee are planning on testing the technique in larger animal models before moving to human clinical trials in the U.S.
This breakthrough follows several other significant successes from the Silver Laboratory. In 2011, the team successfully restored breathing in rats with SCI. In 2006, they used the same bridging technique to restore movement in the paw of paralyzed rats.

Notes about this neuroregeneration and spinal cord injury research