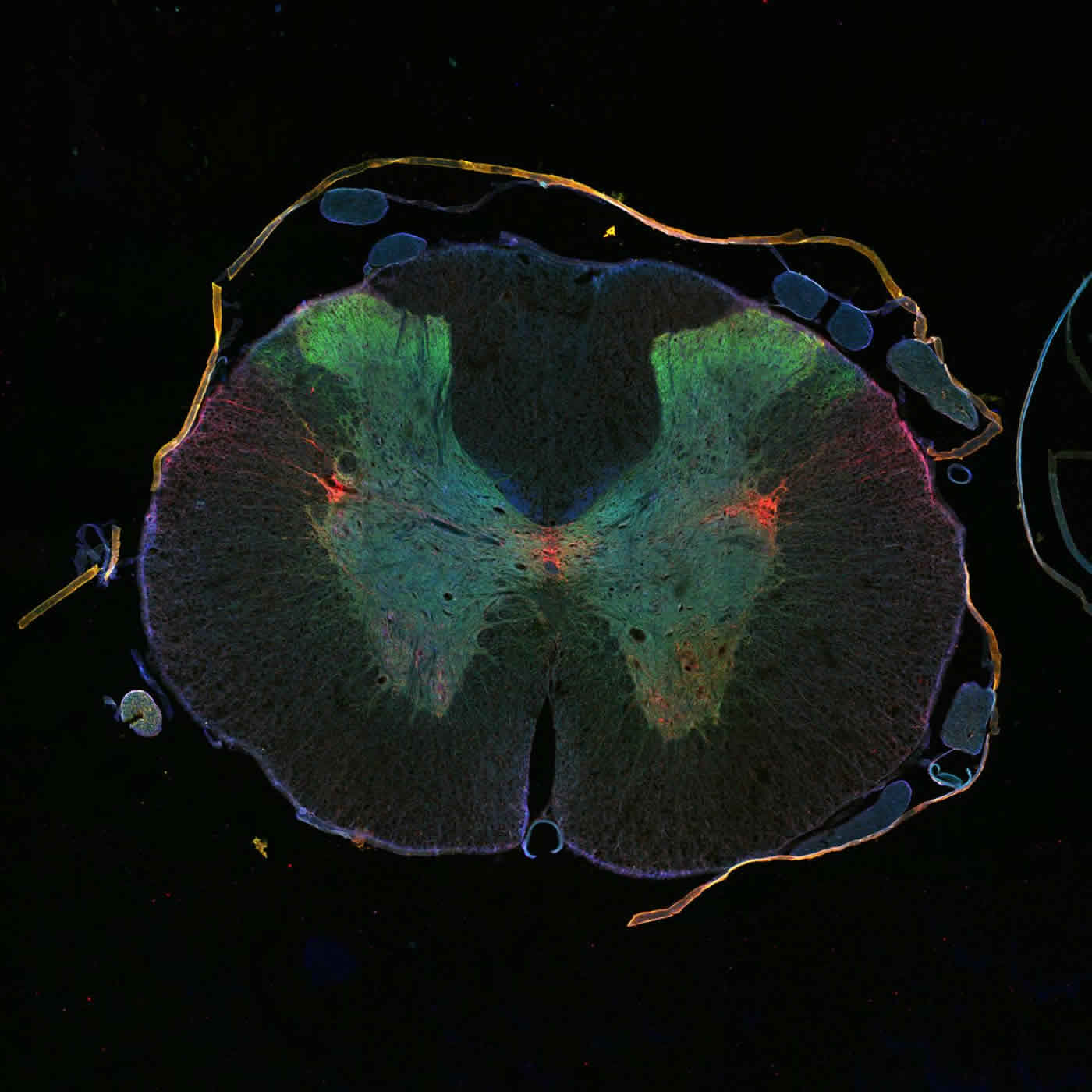 Damage to the spinal cord rarely heals because the injured nerve cells fail to regenerate. The regrowth of their long nerve fibers is hindered by scar tissue and molecular processes inside the nerves. An international team of researchers led by DZNE scientists in Bonn now reports in Science that help might be on the way from an unexpected quarter: in animal studies, the cancer drug epothilone reduced the formation of scar tissue in injuries to the spinal cord and stimulated growth in damaged nerve cells. Both promoted neuronal regeneration and improved the animals’ motor skills.

Nerve cells are wire-like conductors that transmit and receive signals in the form of electrical impulses. This function can be impaired by accidents or disease. Whether or not the affected nerves can recover largely depends on their location: for instance nerve cells in the limbs, torso and nose can regenerate to some degree and regain some or all of their function.

In contrast, the neurons in the brain and spinal cord do not have this ability. If they are damaged by accident or disease, the patient is likely to suffer long-term paralysis or other disabilities. But why is regeneration of these neurons and their long nerve fibers impeded? It is already known that inhibiting factors in newly formed scar tissue and other cellular processes block axon regrowth.

“The ideal treatment for promoting axon regeneration after spinal cord injury would inhibit the formation of scar tissue,” says Professor Frank Bradke, who leads a working group at the DZNE’s site in Bonn and who conducted the study. “However, it is also important that the growth-inhibiting factors are neutralized while reactivating the poor axons’ regenerative potential.” A feasible administration of a potential treatment is also essential for clinical application.

In cooperation with international researchers, Bradke and his team have now managed to take another step towards the development of a future treatment. From their previous research, it was already known that stabilizing microtubules would reduce the formation of scar tissue and promote axonal growth. Microtubules are long, tubular filaments inside the cell that can grow and shrink dynamically. They are part of the cell’s supportive skeleton, which also controls cell growth and movement.

The substance epothilone can stabilize microtubules and is already licensed on the American market – as a cancer treatment. “It all depends on the dose,” says Dr. Jörg Ruschel, the study’s lead author. “In higher doses, epothilone inhibits the growth of cancer cells, while low doses have been shown to stimulate axonal growth in animals without the severe side-effects of cancer treatment.” Epothilone is superior to other cancer drugs with a similar effect because it can penetrate the blood-brain barrier into the central nervous system, thus reaching the damaged axons directly.

One substance – many effects

Experiments have shown epothilone works on several levels. Epothilone reduces the growth of scar tissue by inhibiting the formation of microtubules in the cells that form the scar tissue. Therefore they cannot migrate to the spinal cord lesion and cause wound scarring. At the same time, epothilone promotes growth and regeneration in the nerve cells by causing microtubules to grow into the damaged axon tips.

In short: through the same effect, namely microtubule stabilization, epothilone is able to inhibit directional movement in scar-forming cells while stimulating active growth in nerve cell axons. The animals treated with epothilone after spinal cord injury walked better than those that received no treatment, due to improved balance and coordination. The next goal of Bradke and his team is to test the effect of epothilone on various types of lesion.