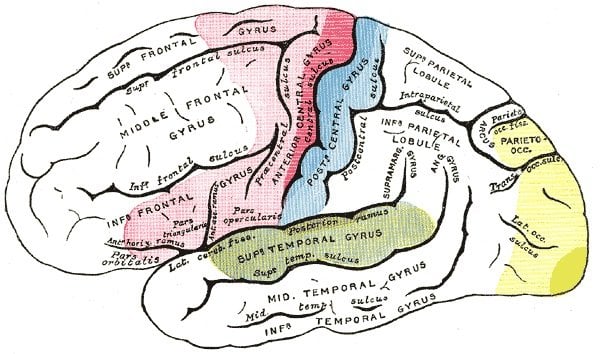 Researchers found the effects of emotional learning on hearing perception were mediated by the auditory cortex, an area of the brain responsible for auditory plasticity. This anatomical brain illustration highlights the location of the auditory cortex in green.
Home
Featured

Anyone who’s ever heard a Beethoven sonata or a Beatles song knows how powerfully sound can affect our emotions. But it can work the other way as well – our emotions can actually affect how we hear and process sound. When certain types of sounds become associated in our brains with strong emotions, hearing similar sounds can evoke those same feelings, even far removed from their original context. It’s a phenomenon commonly seen in combat veterans suffering from posttraumatic stress disorder (PTSD), in whom harrowing memories of the battlefield can be triggered by something as common as the sound of thunder. But the brain mechanisms responsible for creating those troubling associations remain unknown.

Now, a pair of researchers from the Perelman School of Medicine at the University of Pennsylvania has discovered how fear can actually increase or decrease the ability to discriminate among sounds depending on context, providing new insight into the distorted perceptions of victims of PTSD. Their study is published in Nature Neuroscience.

“Emotions are closely linked to perception and very often our emotional response really helps us deal with reality,” says senior study author Maria N. Geffen, PhD, assistant professor of Otorhinolaryngology: Head and Neck Surgery and Neuroscience at Penn. “For example, a fear response helps you escape potentially dangerous situations and react quickly. But there are also situations where things can go wrong in the way the fear response develops. That’s what happens in anxiety and also in PTSD — the emotional response to the events is generalized to the point where the fear response starts getting developed to a very broad range of stimuli.”

Geffen and the first author of the study, Mark Aizenberg, PhD, a postdoctoral researcher in her laboratory, used emotional conditioning in mice to investigate how hearing acuity (the ability to distinguish between tones of different frequencies) can change following a traumatic event, known as emotional learning. In these experiments, which are based on classical (Pavlovian) conditioning, animals learn to distinguish between potentially dangerous and safe sounds — called “emotional discrimination learning.” This type of conditioning tends to result in relatively poor learning, but Aizenberg and Geffen designed a series of learning tasks intended to create progressively greater emotional discrimination in the mice, varying the difficulty of the task. What really interested them was how different levels of emotional discrimination would affect hearing acuity – in other words, how emotional responses affect perception and discrimination of sounds. This study established the link between emotions and perception of the world – something that has not been understood before.

The researchers found that, as expected, fine emotional learning tasks produced greater learning specificity than tests in which the tones were farther apart in frequency. As Geffen explains, “The animals presented with sounds that were very far apart generalize the fear that they developed to the danger tone over a whole range of frequencies, whereas the animals presented with the two sounds that were very similar exhibited specialization of their emotional response. Following the fine conditioning task, they figured out that it’s a very narrow range of pitches that are potentially dangerous.”

When pitch discrimination abilities were measured in the animals, the mice with more specific responses displayed much finer auditory acuity than the mice who were frightened by a broader range of frequencies. “There was a relationship between how much their emotional response generalized and how well they could tell different tones apart,” says Geffen. “In the animals that specialized their emotional response, pitch discrimination actually became sharper. They could discriminate two tones that they previously could not tell apart.”

Solving that puzzle promises new insight into the causes and possible treatment of PTSD, and the question of why some individuals develop it and others subjected to the same events do not. “We think there’s a strong link between mechanisms that control emotional learning, including fear generalization, and the brain mechanisms responsible for PTSD, where generalization of fear is abnormal,” Geffen notes. Future research will focus on defining and studying that link.

Notes about this PTSD and sound perception research

The work was supported by a Burroughs Wellcome Fund Career Award, the Klingenstein Award in Neuroscience, the Pennsylvania Lions Club Hearing Fellowship and a Penn Medicine Neuroscience Center Pilot Grant.

Contact: Jessica Mikulski – University of Pennsylvania School of Medicine
Source: University of Pennsylvania School of Medicine press release
Image Source: The anatomical brain illustration is credited to Gray’s Anatomy and is in the public domain.
Original Research: The research, “Bidirectional effects of aversive learning on perceptual acuity are mediated by the sensory cortex” by Aizenberg, M. and Geffen, M.N in Nature Neuroscience. This is an advanced doi: 10.1038/nn.3443. We will link to the research when published.